HERITAGE HIGHLIGHTS:   The only remaining Sherriff's watermill in England 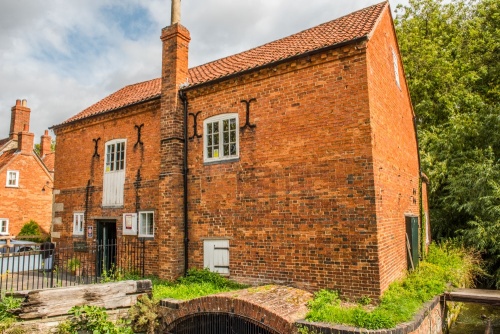 The waters of the River Slea have been used for powering watermills since the Saxon period, and there has been a mill on this spot for well over 1000 years. The present three-storey mill building dates to the early 18th century and has been fully restored to working order. You can watch the milling taker place on special Milling Days throughout the year and purchase fresh stoneground flour in the shop.

We do not know when the first mill was built at Cogglesford, but we do know that flour has been ground on this site since at least AD 700. The earliest mill was named for the Coggle Ford, slightly to the east of the present mill building. The ford was an ancient river crossing on the prehistoric track known as Mareham Lane, which was later used by the Romans as part of their road network.

The Domesday Book of 1086 recorded no less than 18 watermills along the River Slea, making this stretch of river one of the most valuable in the country. The Cogglesford mill was under the control of the Sheriff of Lincolnshire. The term Sheriff comes from a combination of 'shire' and 'reeve'. 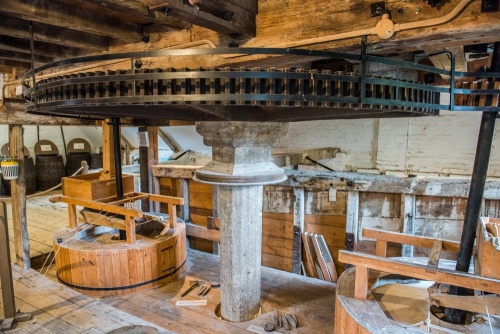 The Reeve was an official under the Lord of the Manor (or shire). Part of the Reeve's job was to collect fees from local residents who were required by law to have their grain ground at Cogglesford mill. The mill is thought to be the only surviving Sheriff's Watermill in Britain still in operation.

Most Saxon mills had a horizontal waterwheel. Both the waterwheel and the millstones were mounted on a single vertical wooden axle. Water was fed onto the wheel through a timber channel from the river, with the flow controlled by a sluice gate. The Saxons ground a wide variety of grain, including barley, rye, wheat and pulses. The poor also used acorns, hazel, and alder.

We do not know much about the medieval mills on this site, but we do know that the mill was known as The Sheriff's Mill and formed part of the Manor of Sleaford and Holdingham. The manor was held by the Bishop of Lincoln and his tenants were required to grind their grain at his mill.

Most of the mills along the River Slea were converted to other uses by the 18th century. Some were used in the fulling process, or for ropemaking or papermaking. 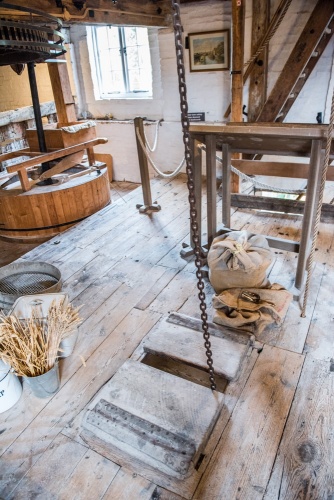 Cogglesford Watermill, however, remained a grain mill. The present mill building was erected sometime between 1750 and 1770 and had two waterwheels, each wheel driving a set of millstones. An upper floor was added in the 1840s to act as a grain store.

When the Sleaford Navigation was built in 1794 it allowed boats carrying grain to navigate into Sleaford and deliver their cargo direct to the mill. This allowed the processed flour and meal to be shipped in bulk quantities across the inland waterways network quickly and cheaply. Cogglesford Watermill had a large millpond, enabling boats to easily turnaround, so it gained in popularity compared to other mills on the river.

The mill's heyday was about to be abruptly ended, however. In 1849 the Corn Laws were repealed. These laws had restricted imports of foreign grain. Without this protection, cheaper grain from Europe flooded the market, replacing locally grown grain.

The situation changed again in 1857 when the railway arrived in Sleaford, and the importance of the inland waterways system waned. The mill owners tried to stem the tide of change by installing a steam engine to replace water power. It was not enough to stave off the inevitable, and the mill closed its doors in 1882. 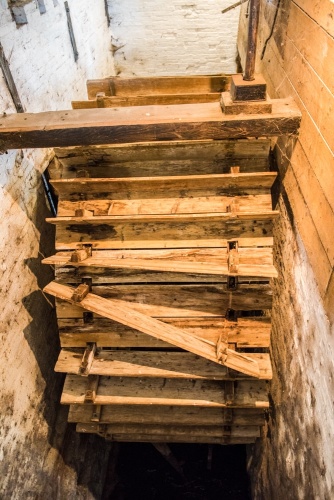 Over the next century, it gradually decayed. Rescue came in 1991 when the North Kesteven District Council stepped in, restored the mill to full working order and opened it to the public. When it was first restored the mill ground grain with one set of Derbyshire grit stones to produce wholemeal flour.

Following public demand for finer white flour, a set of French burr stones was installed. These stones come from the Marne region of northern France and have a high quartz content. The quartz creates a very fine hard-wearing surface suitable for grinding white flour. Both the wholemeal and white flour are available in the shop along with locally produced honey and fruit preserves.

Millers traditionally carved their names into the timber beams and door frames of the mill. This historical graffiti makes for fascinating reading. The oldest graffiti at Cogglesford Watermill dates to 1663. The millers also made tally marks on the mill exterior to keep track of the number of grain sacks being milled. 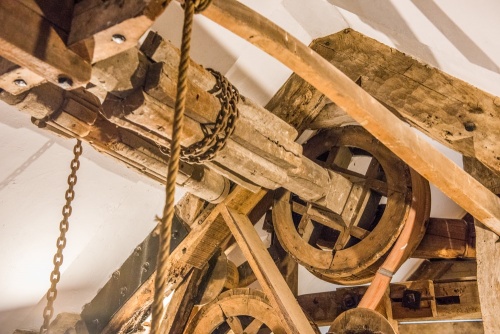 The mill features a restored low breast-shot waterwheel driving two sets of millstones. Even if the mill is not working on the day of your visit you can see videos of the milling process. Exhibits trace the long history of the mill from Saxon times to the present day.

Sacks of grain are lifted up to the top floor on a hoist system that passes up through the original wooden trapdoors. The trapdoors still have their original leather hinges.

You can easily reach Cogglesford Watermill by road. It is just off the B1517 (East Road), reached from the A17. An even better idea is to come on foot; simply follow the signposted footpath that leads from the town centre along the south bank of the River Slea. It takes about 10 minutes pleasant stroll to reach Cogglesford. 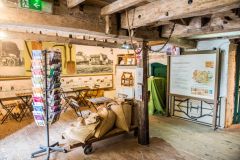 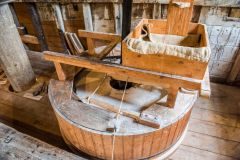 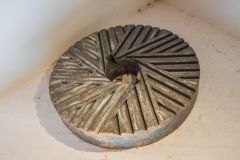 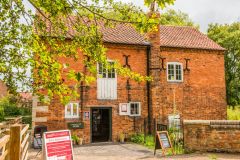 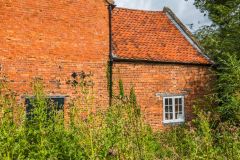