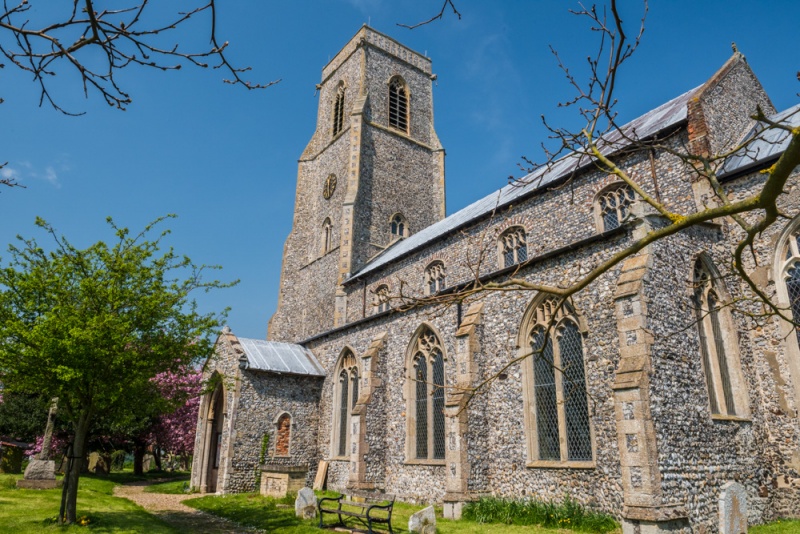 The large village of Trunch is located about 5 miles from the north Norfolk coast. In the centre of the village, surrounded by a lovely collection of cottages and the more modern Crossroads Inn, is St Botolph's church. Much of what you see of the church is early 15th century, built upon earlier foundations.

Upon entering the church the first feature you will see is the font, which dates to the mid 14th century. Though the font is attractive, it is the carved and painted font canopy that really makes a visit to Trunch worthwhile.

This is a quite remarkable piece of woodwork, one of only four such canopies surviving in the entire country (the others are at St Peter Mancroft in Norwich, Durham Cathedral, and Luton). The canopy is supported on six beautifully carved legs. The carving detail is exquisite; with fanciful animal figures and foliage and a bit of political commentary, in the shape of a pig wearing a bishop's mitre.

In addition to the font canopy, Trunch features a superb 15th-century hammer-beam roof, a feature of many churches in Norfolk and Suffolk. Here the carvings of angels are beautifully performed. It is worth bringing along a pair of binoculars or a telescope in order to see the carvings properly.

Much easier to see are the medieval misericords (mercy seats) in the chancel. Each carving is unique; some represent angels, and others are more grotesque in nature. In addition, there are some beautifully carved pew ends and a painted medieval rood screen that rivals many more famous churches in detail and colour.

There are 12 niches in the screen, each painted with a depiction of a single figure - 11 disciples plus St Paul. Much of the costume detail is well preserved, but the faces of the figures were destroyed during the upheavals of the Protestant Reformation in the 16th century.

The church is normally open daylight hours. I've visited on several occasions, and each time I've come away with a sense of awe at the skill of the medieval masons and woodworkers. Even in a county like Norfolk, which has so many examples of wonderful country churches, St Botolphs is an absolute delight to visit. 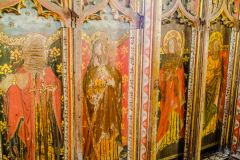 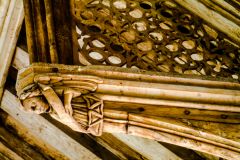 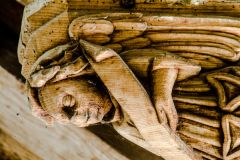 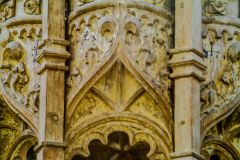 More self catering near Trunch

More bed and breakfasts near Trunch