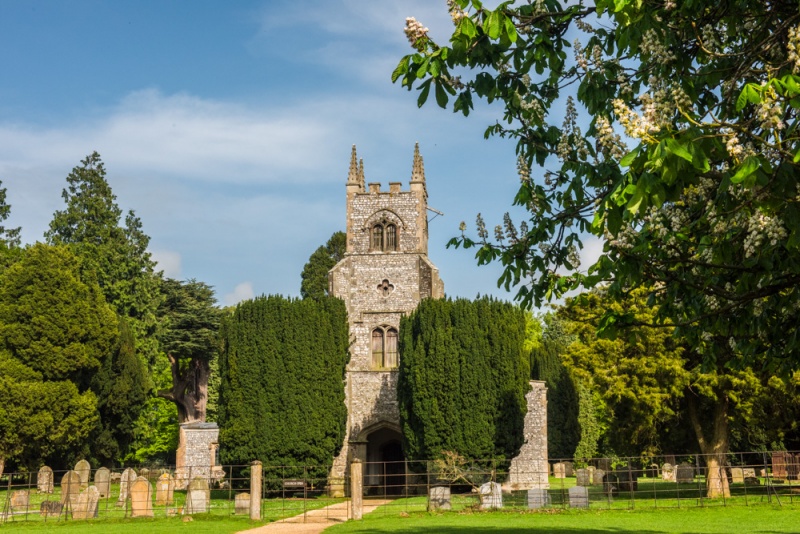 In the grounds of Houghton Hall, ancestral home of the Walpole family, stands the medieval church of St Martin of Tours. The Walpole's lived at Houghton from the 11th century until the 18th century, and counted among their numbers Sir Robert Walpole, the first official prime Minister of England. Sir Robert is buried at the east end of St Martin's church, near the high altar. He was partly responsible for restoring the medieval church and he built the striking Gothick west tower in 1726 as a memorial to his grandfather Sir Jeffery Burwell.

The church was restored at the same time that the entire village of Houghton was torn down and rebuilt as estate cottages outside the Hall grounds.

In the tower is a single bell, cast in 1426 and inscribed with the Latin phrase 'S Petre, ora pro nobis', which translates as 'St Peter, pray for me'.

As you enter the church through the west tower door the first thing you see is the elegant 18th century font. Near the font is an Easter Candle designed by Sir Charles Nicholson in 1926.

The nave arcades date to the late 13th century. The north aisle is original medieval construction, but the windows were inserted in the 1726 rebuilding. The south aisle dates to the early 16th century, and was rebuilt with a bequest from a donor who died in 1516. The flat-topped windows are characteristic of the Tudor period and contrast with the rounded 18th century windows in the north aisle. 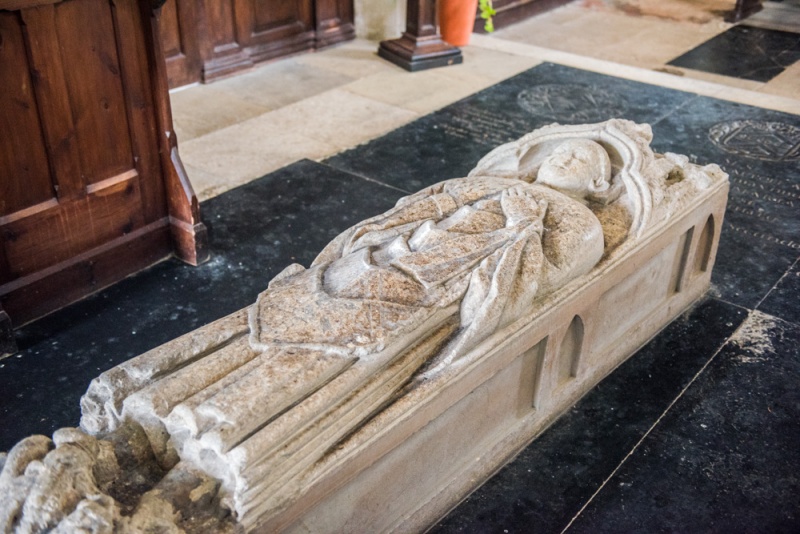 In the centre of the nave aisle is the most interesting historic feature in the church, a carved effigy of a Prior of Coxford Priory, who died in 1307. The effigy was brought to Houghton church in 1522, well before the Dissolution of the Monasteries. It shows the deceased wearing his vestments for the celebration of the Eucharist.

As a point of interest, the church has a silver chalice used at the eucharist which was given by Sir Robert Walpole's father in the late 17th century. It is still used, though not kept in the church for security reasons.

Most of the nave pews are 18th century, with a few earlier examples. Many have odd carvings on the bench ends and arm rests, including several grotesque figures.

The blue and gold altar cloth comes was made for the coronation of George VI in 1937.

On the walls are funeral hatchments to generations of the the Walpole family.

Another reminder of the close connection between the Walpole's and Houghton is the elegant west gallery, built by Horace Walpole of Strawberry Hill near London. Though not as exaggerated in style as Walpole's ebullient 'Strawberry Hill Gothick', the gallery is certainly in keeping with his fascination with medieval fantasy architecture. Horace Walpole is buried in the family vault here, and an ornately carved grave slab is set into the floor. The early 19th century pulpit is Gothic Revival in style.

I came to Houghton on a sunny day in May to visit the Hall. It took so long to explore the Hall and its superb grounds that it was just a few minutes before closing time when I had finished. I asked the person at the ticket kiosk if I had time to visit the church, and he peered at his watch, looked around, and admitted that he hadn't seen anyone walk down the path from the house to the church yet, so if I hurried I might have time. And hurry is what I did.

Thankfully, no one appeared to close the church and I had plenty of time to explore and photograph the interior. I was glad I did, for it is a fascinating church, a mixture of medieval and Georgian elegance, with historic features spanning the centuries. The medieval effigy and 15th-century bench ends are fascinating, especially when seen side by side with the Strawberry Hill Gothick west gallery and the 18th-century grave slabs of the Walpole family. 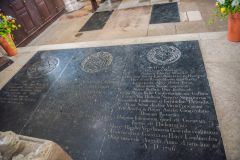 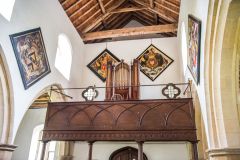