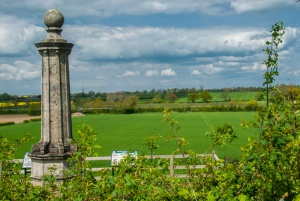 Naseby is a small village of about 500 inhabitants situated high in the rolling hills of the Northamptonshire uplands about 7 miles from Market Harborough.

The village is most well-known for its associations with the English Civil War. It was here on June 14, 1645, that one of the most important battles of the war was fought. A Parliamentary army under the command of Thomas Fairfax confronted Royal troops led by King Charles but commanded in the field by the king's nephew, Prince Rupert.

At first, the royal army had the upper hand, but Fairfax's cavalry, headed by one Oliver Cromwell, swung the tide of battle, and the royalists were routed. Parliament's total victory at Naseby effectively ended the Civil War, though the king dragged matters out until 1646. As a curious side-note, the parish register at Naseby makes no mention at all of the great battle which bears its name.

Today the battlefield can best be approached via the Sibbertoft road, where a Battlefield Monument marks the spot where Cromwell's cavalry began the engagement. Interpretive panels outline the course of the battle. A second monument stands on the Clipston road on the northern approaches to the village, with yet another interpretive panel explaining the battle and its consequences.

The name "Naseby" has its origins in the Dark Ages when it was known as "Hnaefes-Burh", or "fortified place of Hnaefe", Hnaefe being the name of a Saxon settler.

Naseby was a thriving market town in the early Middle Ages, with a market charter granted by King John in 1203. However, the Black Death of 1349 took a terrible toll on the town, and the population dwindled dramatically. Nearby fields still show traces of abandoned buildings from this period.

The community, now little more than a sleepy village, slumbered on into the 18th century, when several outstanding Georgian buildings were added, including Manor Farm (1720), and Old Vicarage (1785). But pride of place must go to Naseby house, built in 1818 for the Fitzgeralds, Lords of the Manor.

In the 20th century, the Hall hosted the Duke of York, later King George V, with his Duchess (The Queen Mother) and a very young future Queen Elizabeth. Naseby Hall was badly damaged by fire in 1948 and was rebuilt from the ground up.

In the 1870s a well-meaning Lord Clifton, then Lord of the Manor, demolished almost all the thatched cottages of Naseby in favour of red-brick cottages for his estate workers to live in. This gives the centre of Naseby a very pleasant Victorian aspect, although the loss of the medieval buildings is only partly alleviated by two remaining 17th century thatched cottages.

All Saints church at Naseby has roots dating all the way back to the Saxon period, and there may have been a Christian settlement here as early as 620. The present church dates from the early 13th century. The South aisle was added to the Saxon church in 1232, and the present nave and North aisle added over the next 75 years.

In the 15th century the walls of the church were raised and a clerestory, low tower, and spire added. A new spire was built in 1860, from which it is said that The Wash and the towers of 40 churches can be seen on a clear day!

A curious remnant of Naseby's history can be found leaning against the outer wall of the North Aisle. It is "Cromwell's Table", which originally graced Shuckborough House, just opposite the church.

The story goes that on the eve of the Battle of Naseby some of the king's lifeguards were sitting down to supper at the table when they were surprised by Cromwell's troops. Several of the royal soldiers were killed, and the rest captured. Their duty done, Cromwell's men sat down at the table and finished the meal!

In the grounds of Manor House on Newlands is the origin of the spring which gives rise to Shakespeare's River Avon. On Church Street is the remnant of the 13th-century market cross, a memento of those halcyon days before the Black Death came calling in Naseby.

Attractions near Naseby include the manor house of Kelmarsh Hall, a Palladian country house by James Gibbs surrounded by Serpentine style gardens. Lamport Hall is a fine 17th-century house by John Webb, built on the remains of a Tudor manor. Althorp, home of the Spencer family, is less than 10 miles away.

More self catering near Naseby

The Granary at Fawsley - 15.4 miles
Daventry, Northamptonshire
Stay from: £50.00

More bed and breakfasts near Naseby