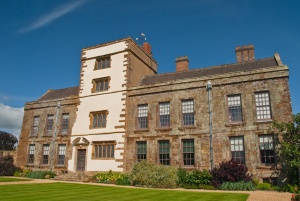 Canons Ashby is a gem of an Elizabethan manor house in peaceful Northamptonshire countryside. The manor was built using stone from a medieval Augustinian priory that was dissolved by Henry VIII and has been the home of the Dryden family for over 4 centuries.

The priory was established around 1147 and dissolved by Henry VIII in 1536. Long before then, the Priory gained an unpleasant reputation. Part of that reputation was due to the priory's popularity with Oxford students, who were accused of rowdy behaviour and poor comportment led to complaints.

Perhaps the students were a poor influence on the canons (or vice versa), for a 15th-century investigation found that monks skipped services in favour of the local pub, and the Prior had disappeared!

Immediately after the Dissolution, the former monastic buildings were granted by Henry VIII to a childhood friend named Sir Francis Bryan. Bryan was saddled with the charming nickname, 'the Vicar of Hell'. His main contribution at Canons Ashby was to rebuild the church on a smaller scale. He sold the estate to Sir John Cope of Banbury.

The estate then passed by marriage to the Drydens of Cumbria. John Dryden built a completely new Canons Ashby House on the site of the former village, incorporating part of a medieval farmhouse. 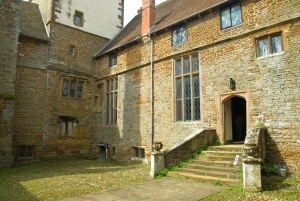 The first part of the new house was a staircase tower, followed by a manor in the shape of an H - a popular layout in the Elizabethan period. Work on the house was completed by John's son Erasmus, who created a court by linking his father's manor to the remains of a medieval farmhouse. The Elizabethan style of the house was altered considerably by Edward Dryden in the early 18th century.

Edward, the nephew of the famous poet John Dryden, refaced the south face of the house in dressed stone and inserted then-fashionable sash windows. Edward did not stop at the exterior of the house; he transformed the interiors in Palladian (neo-classical) style and called on his cousin Elizabeth Creed to decorate the Painted Parlour, one of the showpiece rooms of the current Canons Ashby house.

A later owner was Sir Henry Dryden, know as The Antiquary for his passionate interest in history and architecture, particularly as it concerned his own family and their estates. The Dryden family remained in residence until 1981 when the estate was gifted to the National Trust. 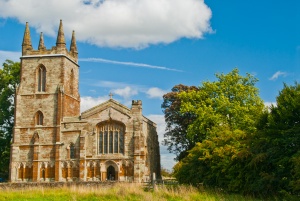 The only remaining feature of the monastery is St Mary's church, set in a lovely copse of trees a short stroll across the grounds from the manor. The church we see today was formed from the west end of the nave of the abbey church, which gives you some idea of how large and impressive the original priory church must have been.

The priory is one of only four private churches in England. Within the church are numerous memorials to Dryden family member, and 11 funerary hatchments set on the walls. The east window has been rather strikingly painted with 'curtains' on either side of the window opening. Look for the memorial brass of John Dryden, the builder of Canons Ashby house.

Another thing to look for is the 'Funeral achievement' of Sir Robert Dryden (d.1708). The 'achievement' consists of a heraldic banner, a tabard, shield, gauntlets, 2 pennons, a helmet and crest, wreath and mantling, spurs and a sword. As you can gather, it is quite impressive! 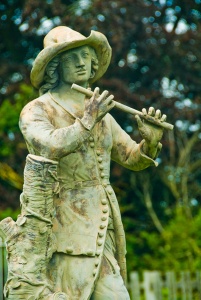 The house is set in wonderful gardens, laid out from 1708-1710 by Edward Dryden. These are in the form of four terraces linked by a central path. The original design called for formal parterres on the upper terraces nearest the house, with the lower terraces given over to kitchen gardens.

Close to the house is a small walled garden area known as The Green, mainly covered in lawns, which used to have two ponds and a bowling green.

In this garden is a famous statue called Shepherd Boy, by John Nost (Jan van Nost), created about 1710. This lovely sculpture shows a young boy playing a flute, a small dog at his feet, one arm resting on a tree stump.

The gardens had a strong influence on the early 20th century Arts and Crafts garden movement popularised by Gertrude Jekyll. They are now being restored to something approaching their original state with the aid of 19th-century records maintained by Sir Henry Dryden.

A path through the grounds leads to Castle Mound, a small earthen motte that may indicate the presence of a Norman motte and bailey castle buried under the ground. Lumps and bumps on the ground indicate the foundations of the medieval village of Canons Ashby, which lost much of its population in the Black Death of 1348.

Our family had a wonderful time visiting the house. The interior was fascinating, and really gave a sense of the Dryden family and how the house changed over the centuries. The gardens are lovely, and I must say that for a photographer the statue of the Shepherd Boy is like a magnet! I can recommend taking the walk over the fields to St Mary's church - though do take good footwear if there have been recent rains!

By the way, don't make the mistake of confusing Canons Ashby with Castle Ashby house and garden, also in Northamptonshire! 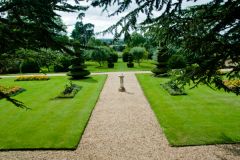 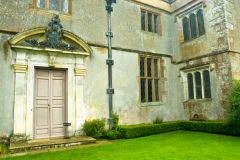 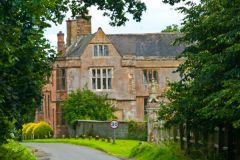 More self catering near Canons Ashby

The Granary at Fawsley - 4.3 miles
Daventry, Northamptonshire
Stay from: £50.00