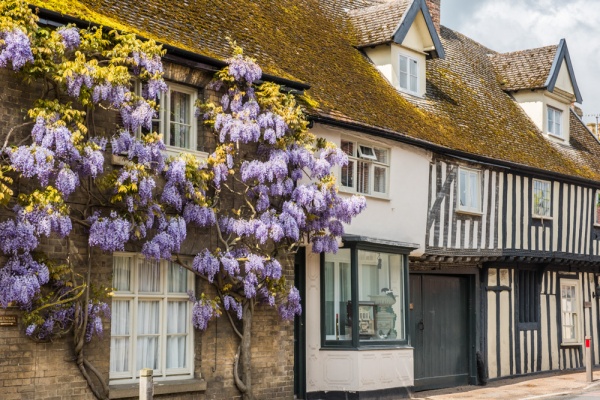 Timber-framed houses on The Street in Woolpit

Woolpit is a large village in northern Suffolk, roughly halfway between the towns of Stowmarket and Bury St Edmunds. The village dates to at least the 10th century. Its peculiar name has nothing to do with wool; it comes from the Old English 'wulf-pytt', meaning a pit for trapping wolves. According to legend, Woolpit is the place where the last wolf in England was trapped in the 12th century.

There are pits in Woolpit, but they have nothing to do with trapping wolves. In the 17th century the area was an important centre for manufacturing 'Suffolk White' bricks. The brick trade died out, but the quarry pits still remain.

From the late 12th century the manor of Woolpit was owned by the monks of Bury St Edmunds Abbey, who retained it until the Dissolution of the Monasteries under Henry VIII. 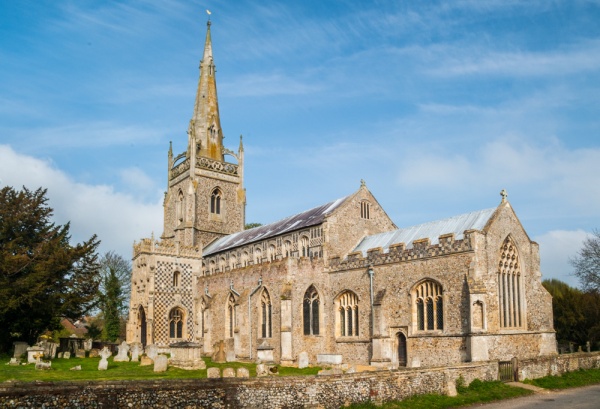 The parish church is dedicated to the Blessed Virgin Mary and dates to at least AD 1005. It was rebuilt around 1087 but only a single Romanesque doorway remains from the 11th-century building. The glory of St Mary's is a superb double hammer-beam roof, decorated with carved figures of angels. Other highlights include a 1520 brass eagle lectern, said to have been given by Elizabeth I. There is also an exceptional 15th century painted screen and carved medieval bench ends.

From the 13th century, St Mary's possessed a richly decorated statue of the Virgin Mary, known as Our Lady of Woopit. The statue was housed in a special chapel and became an object of veneration. Pilgrims travelled great distances to view 'Our Lady', and among those pilgrims was King Henry VI, that most devout monarch, who visited twice, in 1448 and 1449.

The statue was destroyed at the Reformation and the chapel was torn down in 1551. 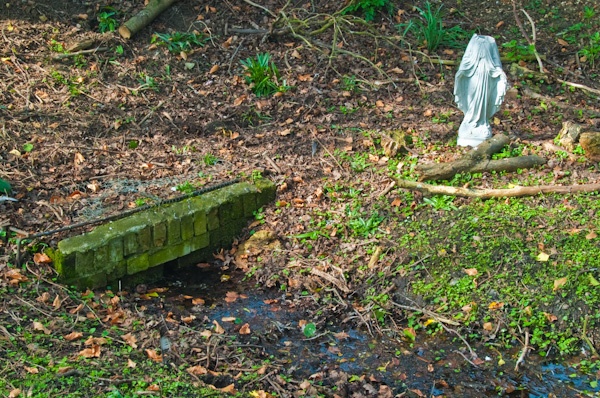 About 300 yards north-east of the churchyard is an ancient moated enclosure, its purpose and precise origin unknown. The enclosure is now a nature reserve, half-obscured by trees and undergrowth. The moat is partially filled by water emerging from an underground spring, now protected by an overhanging brick structure. The spring is known locally as Lady's Well, and is thought to been dedicated to the Virgin Mary, just like the church and Our Lady statue. The well may have also been a destination for pilgrims.

The first record of the 'well' comes from a document written around 1573, which suggests that the moated enclosure was the site of a manorial court gathering in 1557. 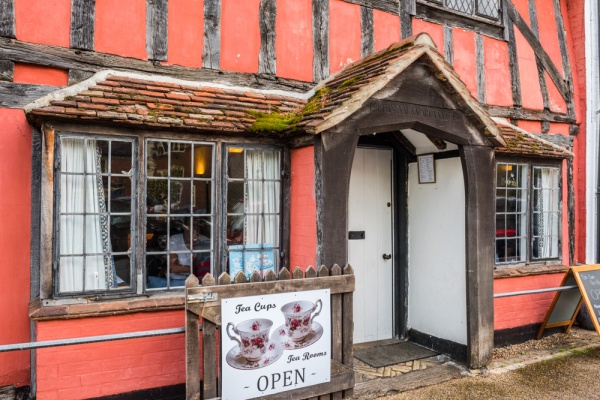 There may well have been some truth to the stories of healing waters, for a recent analysis of the water showed that it had a high sulphate content, which can sometimes be used to counteract eye infections.

When we visited the Lady's Well there was a trickle of clear water emerging from the ground, and someone had placed a small white statue nearby. The statue was headless, but probably depicted the Virgin Mary. The well clearly continues to be a place of veneration for modern pilgrims.

A pair of street names remind us that there were once two mills in the village. Windmill Avenue led to a mill that fell down in 1963, and Mill Lane once led past a post mill that was torn down in the 1920s.

There is a good range of amenities considering the size of the village. As of this writing, there are two pubs, both on The Street; the Swan and the Bull. The Swan dates to 1826, as evidenced by a pair of plaques. Look for the large arch made to allow passage for carriages.

There is also a village shop, two tea rooms, and a village bakery serving very tasty fresh bread, as we can attest.

The Woolpit Museum is the smallest in Suffolk and occupies the upper floor of a pretty 16th-century timber-framed cottage known as the Village Memorial Institute. There are two permanent displays; one focussing on the Woolpit Brickmaking Works, the other a recreation of a Victorian kitchen. There are also changing exhibits exploring the history of the village from the Saxon period to the present day. 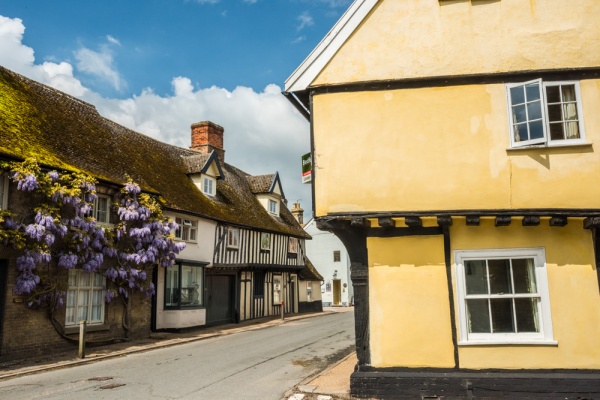 Looking down The Street

The Green Children of Woolpit

No description of Woolpit is complete without the story of the mysterious Green Children. The peculiar tale was first recorded by the medieval writers Ralph of Coggeshall and William of Newbridge. It has been told many times and in many forms, but the bare facts appear to be as follows.

Sometime in the 12th century, a pair of children appeared in Woolpit. They seemed to be brother and sister and were of normal appearance except that their skin was a striking green colour. They wore odd clothing and spoke an unrecognisable language. They appeared to be starving so the villagers offered to feed them, but they refused normal food.

They were brought to the house of Sir Richard de Caine, at Wilkes, where it was found that they would only eat raw beans.

Eventually they did learn to eat 'normal' food, and gradually lost the peculiar green tint to their skins. The pair were convinced to be baptised in St Mary's church. The boy child, however, sickened and died shortly afterwards.

As for the girl, she took to her new life and entered the service of Sir Richard. Her behaviour was considered unbecoming, and she was labelled 'loose and wanton in her conduct'.

The child was taught to speak English, and told a remarkable tale; that she and her brother came from an underground realm called St Martin's Land, where all the inhabitants are green. She said that she and her brother were herding their flocks one day when they came upon a cave. They followed the cave and began to explore. At length they emerged into the land of sunlight, where they were found by the villagers.

What truth is there in the legend of the Green Children? One interpretation is that the story is a mangled version of true events, perhaps an encounter with Flemish immigrants. As tempting as the explanation is, it does not explain the green skin. It is thought that skin discolouration like that described could be the result of dietary deficiency anaemia, which would be corrected with an improved diet. A local tradition is that there are people alive today who are descended from the Green Children.

The village sign incorporates likenesses of the Green Children, alongside the image of a wolf. 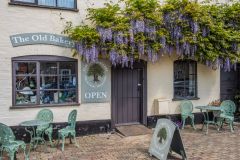 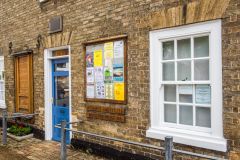 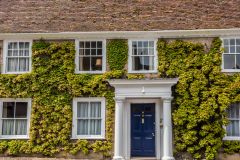 More self catering near Woolpit, Suffolk