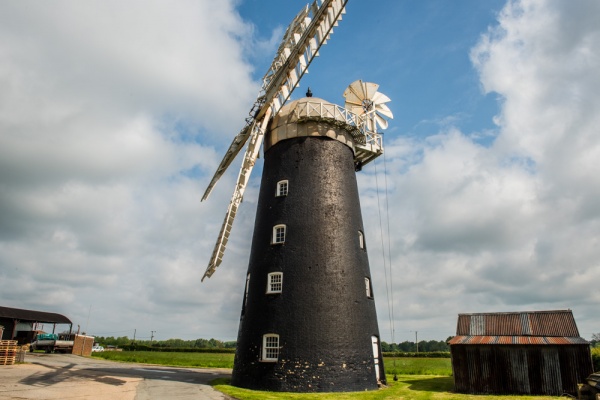 The Village of Two Mills

The village of Pakenham, Suffolk, is known as the Village of Two Mills and is unique in having both a working water mill and a working windmill. The first, and the most famous mill is the Pakenham Water Mill, built in the 18th century to replace a Tudor mill, itself built on the site of a mill recorded in the Domesday Book.

The second, and less well-known mill, is the Pakenham Windmill, which stands on the edge of a working farm well north of the village. In fact, it is much closer to Ixworth than it is to Pakenham.

The tarred brick mill stands 5 storeys high, with a domed cap and fantail and 4 patent sails driving two sets of millstones. A gallery was added to the cap during restoration work in the 1950s.

The mill is 80 feet high and requires 40 gallons of tar to keep the brick exterior covered, while 14 gallons of white paint is needed for the fantail and cap. One unusual feature is that governors for the millstones are driven by chains rather than a system of belts.

The mill was built in 1831 (some sources claim an even earlier date around 1820) and was in operation until 1970. It has been owned by the Bryant family since 1885. It was restored in 1961 with the aid of a grant from the Suffolk County Council. One condition of the grant was that the Bryant family continue to work the mill.

Disaster was avoided in 1971 when the mill was struck by lightning. The iron sack chain acted as a conductor for the lightning, giving it a path to earth. A stock was split and a sail damaged, but the chain saved the mill from fire damage. A lightning conductor was sensibly added when the mill was repaired.

Another restoration was needed in 2001 to keep the mill in working order.

The mill featured in a BBC short film used during interludes between broadcast programmes. It was also used for an episode of the Survivors TV programme in 1977.

The mill is open daily during working hours of by arrangement for groups, as well as for National Mills Weekend. There is a small office near the mill selling oats and freshly ground from the mill.

We actually ran across Pakenham Windmill by complete accident while looking for the Water Mill. We got lost and ended up turning onto Thieves Lane in error, only to find the striking windmill directly ahead of us. Well, naturally, we had to stop and investigate! 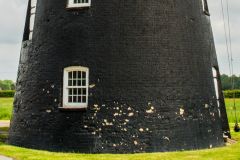 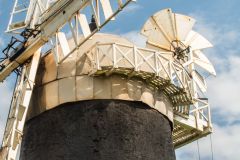 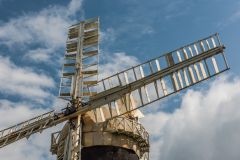 More self catering near Pakenham Windmill