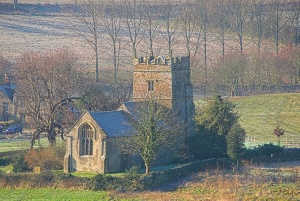 A minor road connecting Moreton in Marsh to Great Rollright runs along an outlying ridge of the Cotswold escarpment. About a mile from Great Rollright a quiet lane leads off to the south-east. The lane leads down the ridge before the view opens out to reveal a tiny valley, with a cluster of farm buildings tucked in the valley bottom.

In the midst of the farm a small church sits on a rise. This is what remains of the village of Little Rollright.

A permissive road leads through the farm to the little church dedicated to St Philip. The exterior is simple and plain; a square west tower of no great size, with a north aisle and small south porch. On the west wall of the tower, a memorial is set into the stone. 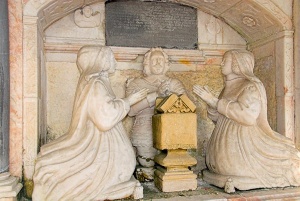 The Dixon memorial in the chancel

Within the church, you see a very simple, whitewashed nave, leading to an even smaller chancel. But this is where things get very interesting.

Set into the north wall of the chancel is a lovely Jacobean monument depicting three kneeling figures gathered around an altar, or lectern. A male figure is at the centre, flanked by two female figures. The inscription on the memorial shows that it is dedicated to Cecil Dixon (nee Whitelocke) who died in 1647, who is presumably one of the two female figures.

The man is undoubtedly her husband, Edward Dixon, (d. 1655). There is no indication as to the identity of the second woman; perhaps a second wife of Edward Dixon. The couple did have a daughter, but they also had a son, so if one is depicted on the tomb you would expect the second to be shown as well. The three figures are set within an arched niche supported on columns of black marble, topped with classical leaf motifs. 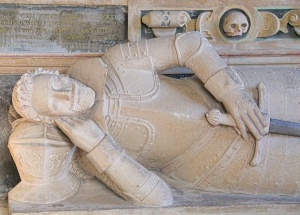 The 17th century Dixon memorial
beside the altar

Beyond this tomb is a second tomb, set beside the altar. The inscription is too faded to be read, but the carving is of a lying knight, his head on a helmet. The costume he is wearing would appear to be Jacobean. The carving is exceptional, and in an excellent state of repair.

The tomb is topped by a carved and painted coat of arms. On either side of the recumbent effigy are lozenges painted with symbols of mortality, such as an hourglass and skull.

All in all, St Philip is a lovely little country church, well worth a visit. The Rollright Stones stone circle is over the hill, and a signposted footpath leads to the circle from the centre of the village. 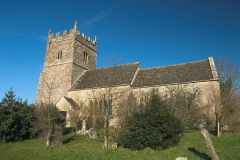 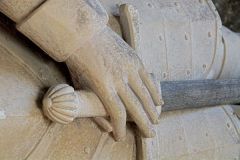 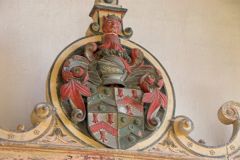 More self catering near Little Rollright