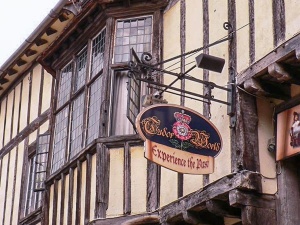 In the heart of historic Stratford-upon-Avon is an attractive timber-framed building, listed as Grade II* for historic interest. But what is inside this historic building will be just as fascinating for visitors to Shakespeare's Stratford. The house was once owned by William Rogers, the real-life person who inspired Shakespeare's comic Falstaff character.

Now 'Falstaff's House' has been transformed into an award-winning Tudor museum, offering visitors a glimpse into the world of the Tudors, from 1483 until the death of Queen Elizabeth I in 1603. All aspects of Tudor life are covered, from the life of Elizabeth to the devastating effects of the plague.

The museum is full of authentically themed recreations of daily life, revealed in a multi-sensory experience through sights, smells, sounds, and interactive displays. See what is was like to live in Tudor England, in perhaps the most historic house in Stratford.

Behind the main house is a courtyard theatre, where Shakespeare's plays are regularly performed. 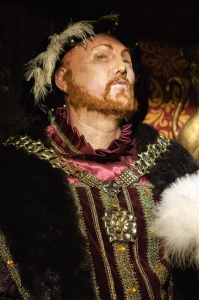 The building is named for William Shrieve, who served as an archer to Henry VIII and is the first recorded tenant of the property, taking up residence in 1536. It was later owned by Willliam Rogers, a tavern keeper thought to be the model for Shakespeare's Falstaff. Shakespeare's own daughter, Suzannah (Susanna), was known to have been close friends with Roger's daughter Elizabeth.

The foundations of Shrieve's House date back to 1196, but perhaps of even greater interest is a section of cobbled carriageway, the oldest in Stratford. William Shakespeare himself would have walked across these same cobbles.

Shrieve's House is thought to be the oldest lived-in house in Stratford upon Avon. A relative newcomer, by comparison, is a large 16th-century barn behind the main house. The facade of the house that faces onto Sheep Street dates from 1470, but the remainder of the house was heavily rebuilt after a large fire swept through Stratford in 1594.

During the Civil War, Parliamentary soldiers were billeted at Shrieve House during the Battle of Edgehill in 1642. After the war, the first mayor of Stratford, John Woolmer, lived in the house.

Shrieve House is reputed to be among the most haunted buildings in England, and Tudor World hosts regular ghost hunt evenings. Visitors can follow costumed guides as they lead the way by lantern light through the rambling corridors of this ancient house.

More self catering near Tudor World