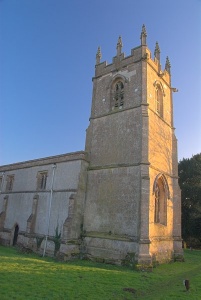 Summary
A wonderful little church, with a wonderfully carved Norman doorway, 14th-century tower and font, and the 16th-century 'Batersby Brass'.

Tucked away down a minor road off the A3400 between Shipston-on-Stour and Chipping Norton is the quiet village of Great Rollright. Set on a small rise at the eastern end of the village is this gem of a country church. The church is approached through an early 20th-century lych gate, inscribed with the names of nine Rendall sons who had the lych gate built in memory of their mother. 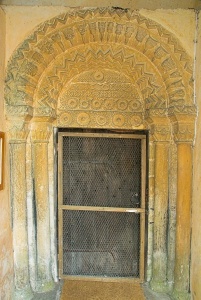 St Andrews consists of a central west tower, nave, chancel, north and south aisle, south porch, and chantry chapel. The south porch is 14th century, with a row of 47 carved heads around the roofline.

The heads are unique, with some rosettes, men, women, and animal figures. The stops on the westernmost window are quite wonderfully carved 'Green Man' and 'Green Woman' faces, peering out from a cluster of leaves. Above the door of the porch is a sundial dated to 1658.

The oldest part of the church is one of the first things that meets your eye on entering the south porch; a magnificently carve Norman door. The double columns are topped with two-story capitals, which then give way to a quite wonderful double arch.

The design of the arch is fascinating, with two levels of traditional Norman chevron patterns interspersed with elongated 'beakheads', each uniquely carved. But it is the tympanum that is the real eye-catcher.

Here the Norman craftsmen have excelled themselves; there is a roughness to the design that looks almost Celtic, or perhaps Arabic, with circular shield patterns and zigzag designs, in the midst of which lies a figure in a shroud. Above the figure a fish eats, or, as the church informational leaflet suggests, spits out, a human head. The overall effect of the door and tympanum is very striking. 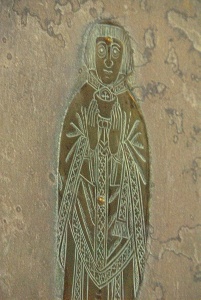 Inside, the 14th century font is lovely, and in very good repair. A painted rood screen separates the chancel and nave. The screen itself is probably medieval, but the paint was renewed in 1851, giving it a colour quite unlike some screens of a similar age that have not been 'touched up'. Beside the altar is a medieval canopied piscina with traces of pint still visible. To the north of the chancel is a medieval brass, leaning against the wall.

This is the 'Batersby Brass', a memorial to a James Batersby, rector of St Andrews, who died in 1522. The brass is in extremely good condition, with the result that you can clearly make out the design of the vestments worn by the tonsured figure of the departed rector.

All in all, St Andrews is a gem of a country church, well worth a visit. The Rollright Stones stone circle is just a mile or so down the road. 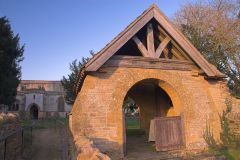 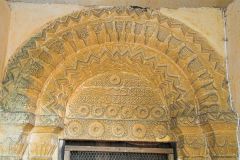 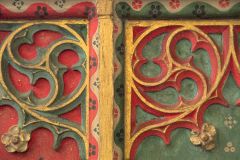 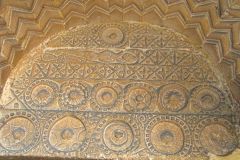 More self catering near Great Rollright