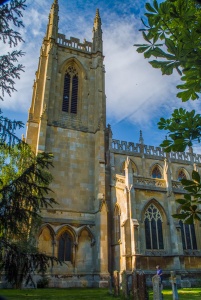 The attractive country church of Hampton Lucy has its roots in the 14th century, but this is very much a 19th-century church, and one of the best examples of Victorian Gothic style in Warwickshire. In 1826 the Lucy family of Charlecote Park decided to tear down the older church and completely rebuild it in the newly fashionable Gothic Revival style.

St Peters is one of the earliest examples of Victorian Gothic Revival, and one of the finest, due to the deep pockets of the Lucy patrons. The Lucys were not simply the patrons, though; the rector was also a Lucy, Sir John, who served the parish from 1815-1874.

The Lucys called in architect Thomas Rickman to design the tower and Henry Hutchinson to create the nave. Rickman is known as being the first to coin the three distinctive phases of English Gothic architecture; Early English, Decorated, and Perpendicular. 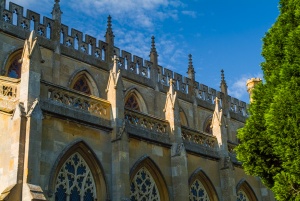 The clerestory and crenellated roofline

The layout is very traditional, with a nave lit by high clerestorey windows, a chancel, west tower, north and south aisles, and a north porch. In 1858 Sir Giles Gilbert Scott was called in to rebuild the chancel and add the apsidal end. Scott also completely refurbished the interior.

The result is a glorious testament to Victorian style, elegant opulence, beautifully furnished and using the finest materials throughout. The oak stalls are beautifully carved, and the east window is full of colourful glass by Thomas Willement.

Though much of what we see today is Victorian, there are several interesting older features worth mentioning. At the west end of the church is a 14th-century lead seal depicting Pope Innocent VI (1295 – 1362).

The seal was discovered buried in a churchyard grave in 1934. Where did it come from? One theory is that the seal was originally attached to a 1356 charter authorising the rector of Hampton Lucy, Simon de Gaynesburgh, to exchange livings with Thomas Mershton. 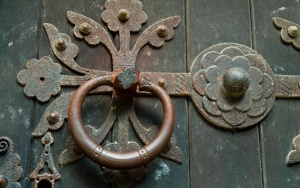 Also 14th century are two sections of medieval tiles in the south aisle. One section has heraldic symbols, with strange beasts and hounds chasing a hare. The other set has a quatrefoil and foliage design. Near the medieval tiles is a brass plate commemorating Richard Popham, (1730), who served as steward to the Lucys of Charlecote.

St Peter's is within sight of Charlecote Park (National Trust), the Lucy's family seat. It is well worth combining a trip to Charlecote with a short jaunt to Hampton Lucy. The church is open most days, and is well worth exploring, especially if you enjoy Victorian Revival architecture at its finest. ,/p> 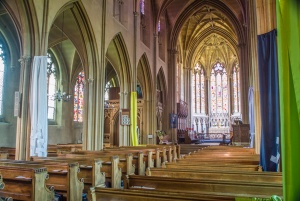 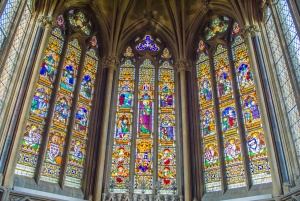 The east window by Willement 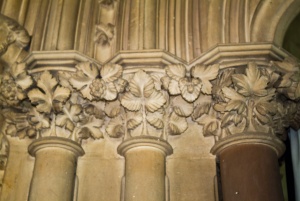 More self catering near Hampton Lucy