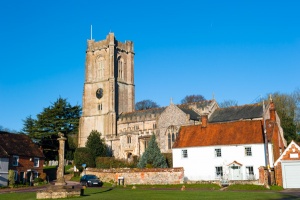 The 12th-century church of St Michael's stands on a low rise at one end of the elongated village green in Aldbourne, creating an almost perfect picture of an English countryside village idyll. Period cottages line the green, and a cosy pub looks out past an old preaching cross towards the church.

At first glance St Michael's seems almost too large for the village; it is a lovely building of some considerable size. Much of what we see today dates from the 13th to the 15th centuries and is very much in Gothic style, but there are parts of a Norman church incorporated in the current building.

We can reasonably suggest that there has been a church on this site since before the Domesday Book. There are bits of Norman decorative stonework in the south doorway arch and further stonework inside the church.

The Wiltshire Community History project suggests that there was a wooden church here as early as 966 AD, and a church is recorded in the Domesday Book of 1086. The National Monument Record goes even further and suggests that Aldbourne was a Saxon minster. We know that a stone church existed before 1150. That church had to be rebuilt following a fire around 1220, at which time it seems to have been dedicated to St Mary Magdalene.

In 1460 Richard Goddard financed a west tower, replacing an earlier central tower. Goddard also had the roof raised and a clerestory inserted and added the porch and chantry chapels. By the following century, a small school was established in a chamber over the south porch. 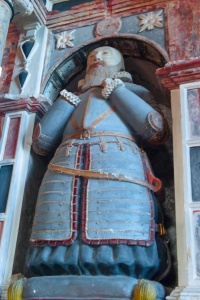 The nave and chancel make up the earliest part of the building, both erected in the 13th century when the earlier Norman church appears to have been almost completely rebuilt. The builders did not abandon the Norman stonework, however; Norman chevron decorations are set over the nave arches, an effect that doesn't always work aesthetically, but it does create an unusual and interesting appearance!

The chevrons were originally used in a traditional Norman rounded arch, and here they are applied to a pointed Gothic arch, with results that are startling at first glance. One of the arches on the north side of the nave terminates in a carved 'stop' in the shape of a dog's head.

Above the nave rises a 15th century clerestory, and there are 15th century transepts, Lady Chapel, porch, and tower. In the 1860s the church was restored by William Butterfield, one of the most prominent architects of the Victorian Gothic era.

The rather sparsely furnished chancel is lit by a 13th-century lancet in the south wall, but the three-light east window is a Victorian replacement of a Perpendicular Gothic window. These windows look down on a fascinating alabaster table tomb to the aptly named John Stone, vicar of Aldbourne from 1473-1510.

I've been fortunate enough to see a lot of alabaster tombs around the country and I've seldom seen one that has survived so beautifully; the carving is wonderfully clear and deeply etched into the alabaster surface of the table top. Though the top is cracked in several places you can see every fine detail of Vicar Stone's garments and features. 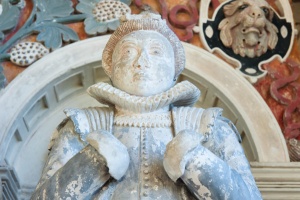 In the Lady Chapel, at the north east corner of the building, is a delightful early 17th-century wall monument to two Walrond brothers, who died in 1614 and 1617. This fascinating monument is in classical Renaissance style and features a painted statue of each brother, kneeling within a niche. The details of the period costumes are wonderfully preserved.

Set into the floor near the memorial are late medieval brasses to Richard and Elizabeth Goddard of Upham House. Richard Goddard is thought to be the man responsible for financing the 15th-century rebuilding of St Michael's.

One historical feature which you will probably miss if you didn't already know it was there is a medieval wallpainting, half hidden in the dark shadows above one of the south aisle arches. This is a simple decorative pattern of rosettes and curving lines.

Close by are the royal arms of Queen Anne. You will note that the arms feature the lion of Scotland, so we know it must have been painted after the Act of Union in 1707 and before Anne's death in 1714.

One unusual feature - or should I say two - is a pair of wooden fire engines, nicknamed Adam and Eve, kept in the church for safekeeping. These were purchased in 1778 after two damaging fires in the village. They were purchased from John Bristow Engine Maker in London. For many years they were lodged in a specially built Engine House close to the church.

The font is 17th century, and the finely carved pulpit is Jacobean, brought to Aldbourne from Speen church.

Aldbourne's parish church is an absolute delight. The location, for a start, is simply wonderful, and the combination of the long village green and historic cottages make a marvellous picture, with the church looking out across the green and the old cross.

The interior furnishings are splendid; the Goddard memorial is full of fanciful detail, the Stone tomb is one of the best examples I've ever seen, and the Walrond monument is beautifully preserved. All in all, Aldbourne is well worth making a detour to see. 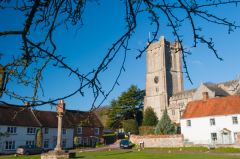 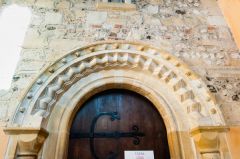 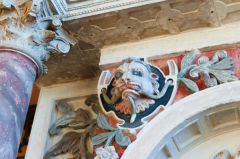 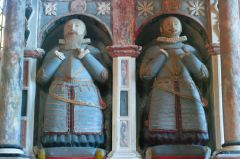 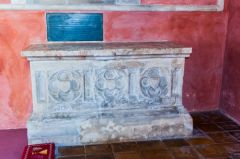 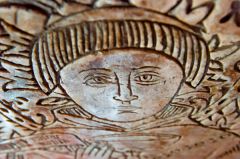 About Aldbourne, St Michael's
Address: Crooked Corner, Aldbourne, Wiltshire, England
Attraction Type: Historic Church
Location: The church is at the far end of the end of the village green. Parking around the green and on side roads.
Location map
OS: SU264758
Photo Credit: David Ross and Britain Express