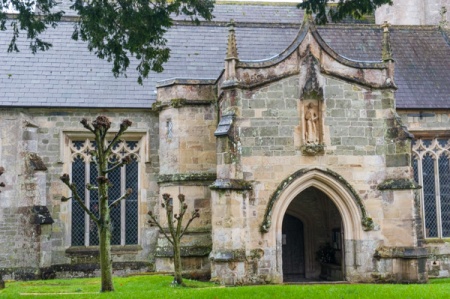 The church of St Michael in Mere is one of the finest parish churches in Wiltshire, with a wealth of historic features to delight even the most casual visitor. The narrow, high nave suggests a Saxon building stood here, and a church was recorded in 1091.

The oldest part of the building dates to the 13th century, and the striking 38-metre high tower is 15th century, with tall pinnacles that can be seen for miles around this pretty town. The north (St Matthew's) Chapel was built around 1325 and the south chapel added around 1350 by Sir John Bettesthorne, also known as John of Mere. Bettesthorne gave money for mass to be said daily for Queen Margaret, second wife of Edward I, and for himself and his wife.

Bettesthorne's wonderful memorial brass is set into the floor of the chapel he built. The brass dates to 1398 and has an unusually complete inscription with a code letter that enables us to determine that Sir John died on a Thursday. 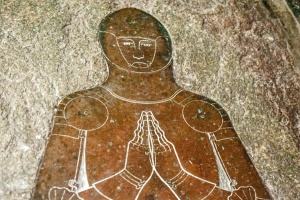 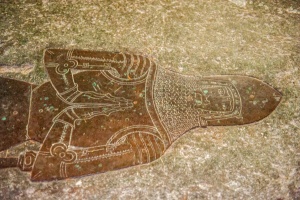 The Bettesthorne brass from the side 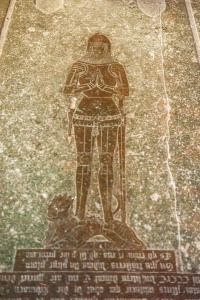 The brass and inscription

The church has fragments of magnificent 14th and 15th century painted glass. There would be much more, but in 1645 Cromwell's soldiers destroyed much of the original medieval glass. The best glass is gathered in the west window of the Bettesthorne Chapel, with four panels, including one depicting St Christopher. There are also very nice Victorian windows, including one by the famous Clayton and Bell company. 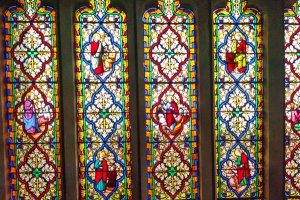 One of the highlights is a beautifully carved 15th-century parclose screen. There are lovely 17th-century pews with carved bench ends, built in 1640 by William Walter (see Maiden Bradley). In 1856 the interior was heavily restored, the roof renewed, and the Jacobean box pews cut down 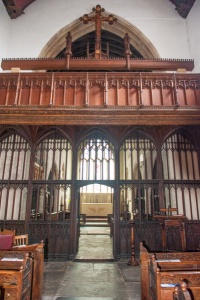 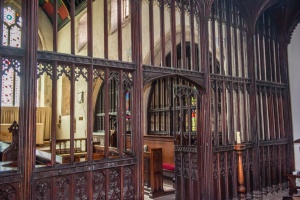 The wooden rood screen is 15th century at the base with a modern gallery and rood above. Of a similar 15th century period are wooden screens to the two chantry chapels. In the south chapel is a 15th-century altar tomb and a wall monument in baroque style to William Chafin (d. 1712). 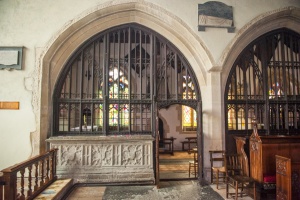 Entrance to the Bettesthorne Chapel 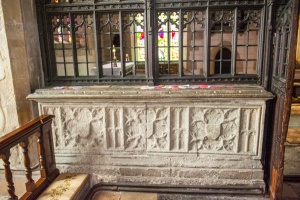 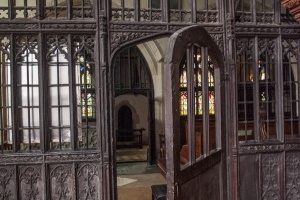 The chancel stalls have a lovely collection of misericords. Those on the south side date to the 14th century while those on the north side are 16th century. Subjects include a Green Man, angels, a Tudor rose, foliage, and a winged dragon. Just inside the communion rail, top the south of the altar, is a heart-wrenching small coffin-shaped memorial to an infant who died in 1829.

There is a royal coat of arms to James I, erected in March 1685, and thought to be the first arms set up in James' short reign. The font is 15th century, set on a Victorian base.

Look up as you enter the porch; over the entrance, set into a niche, is a statue of St Michael, dating to 1160. Near the porch is the stump of an Elizabethan cross, erected in 1556.

Among those buried in the walled churchyard are the parents of author Rudyard Kipling.

We came to Mere on a rainy day in February, not the best weather for enjoying the church exterior! But as for the interior, well, prepare to be impressed! The combination of the beautifully carved wooden screens, memorial brasses, colourful Victorian stained glass, and spacious nave arcades makes for a superb historic church. To say that I was impressed is an understatement; Mere's church is one of the most enjoyable I visited in Wiltshire. Well worth a detour to see. 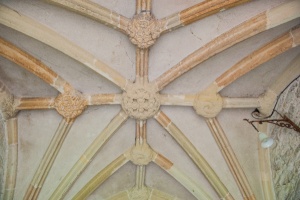 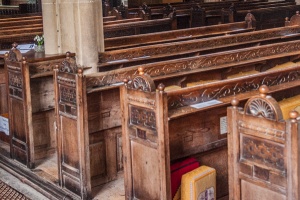 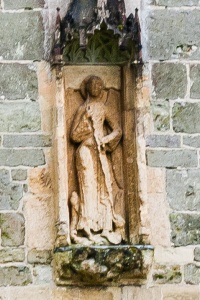 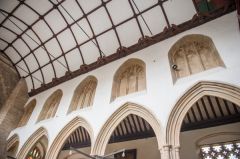 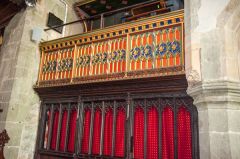 More self catering near Mere

More bed and breakfasts near Mere

Self Catering near Mere