It is difficult to know which is more enjoyable to visit - the interior of Castle Howard, or the quite lovely gardens and grounds! Here we take a look at the major areas of the house that are open to visitors. 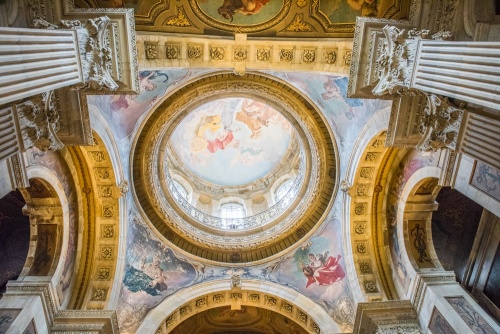 The Dome is probably the most easily recognizable landmark of the house at Castle Howard. Impressive from the outside, it is only when standing beneath this extraordinarily airy and light baroque showpiece that you begin to appreciate what a remarkable architectural achievement it is. The dome was completed in 1706, and stands today as a testament to architect John Vanbrugh's vision.

The Dome is 70 feet in height, a fact which cannot give a true impression of the remarkable sense of spaciousness and light that it brings to the Great Hall below. The four large painted figures at the meeting of the columns that support the Dome represent the four elements; Earth, Fire, Air, and Water. They are by Giovanni Pellegrini, who worked at Castle Howard from 1709 - 1712. The lavishly painted Dome tells the allegorical tale of Phaeton, son of Apollo, who falls to earth from his father's chariot. 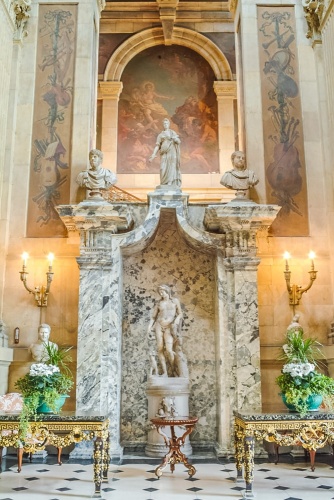 The Niche of Bacchus

The Dome was badly damaged by fire in 1940, a blaze which also destroyed some twenty rooms of the house. It was over 20 years before the damage was repaired and the dome restored.

Take note of the fireplace surround and the imposing niche of Bacchus opposite. They were built by Italian workmen in 1711-1712 of scagliola, a blend of plaster and marble. This represents one of the earliest known examples in England of this technique, which was to later prove so popular in the Palladian designs of Robert Adam. 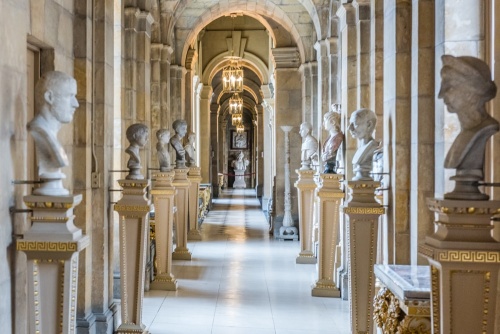 One of the first places reached by visitors touring the house is the Antique Passage, a corridor lined with classical antique statuary, primarily Roman. At the head of the Antique Passage stands a large statue of the Roman goddess Fortuna.

As you progress down the dimly lit passage, you pass busts and statues of classical figures, most of them gathered by the 4th Earl on a trip to Italy (1738-1739). Most of the antiques are originals, dating to as early as the 2nd century AD, but there are also several copies of original antique statuary.

One of the two formal bedrooms on display to visitors, Lady Georgiana's Bedroom and the lovely dressing room beside it, evoke the life and times of Lady Georgiana Howard (nee Cavendish). Lady Georgiana, the daughter of the 5th Duke and Duchess of Devonshire, married George Howard, later the 6th Earl of Carlisle, in 1801.

In the 1830s these rooms were part of the Earl and Countess' private apartments. Much of the furniture pre-dates Lady Georgiana's arrival at Castle Howard, though most of the Howard family portraits that encircle the room are contemporary to her life here. 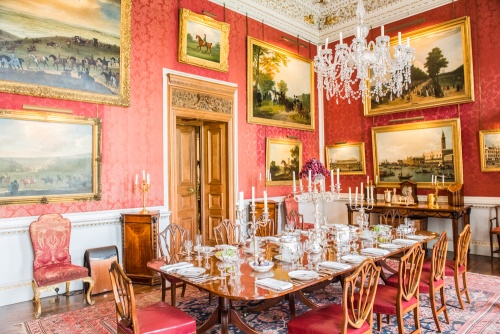 The passage from Lady Georgiana's Bedroom and dressing room leads to another dressing room and bedroom, this called simply The Castle Howard Bedroom. Where Lady Georgiana's Bedroom is feminine in both furnishings, and feel, the Castle Howard Bedroom is decidedly male. A deliciously ornate set of ornate toiletries sits upon a sideboard, and the writing table is drawn up as if the resident of this room was about to sit down and pen a missive.

The bedroom furniture (1777-1789), was specially commissioned by the 5th Earl. It was made by John Linnell of a type of sandalwood imported from Brazil. The four lamps that shed a little modern electric light on the older furnishings were built in the same style as the earlier furniture.

Queen Victoria is known to have slept in the bed that graces the dressing room when she visited Castle Howard in 1850. The wallpaper was added in 1884 as part of a redecorating scheme by the 9th Countess.

The enduring popularity of the television production, Brideshead Revisited, is recalled in this small exhibition. The room is decorated as a dressing room for actors, with makeup, costumes, and camera equipment such as that used during the filming of the series, which took place in 1981. 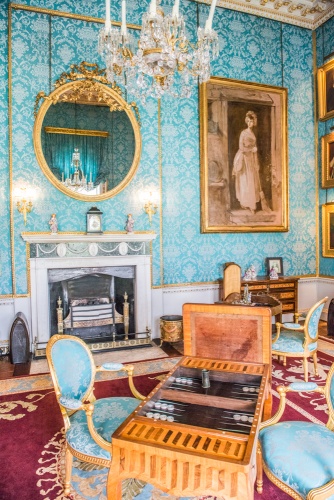 The Crimson Dining Room leads into this lovely room, filled with portraits by notable artists such as Gainsborough and Joshua Reynolds. The settees and chairs are by John Linnell, who also made much of the furniture in the Castle Howard Bedroom.

Not a museum in the formal sense of the word, the Museum Room contains an eclectic mixture of objets d'art, furniture, and furnishings collected over the centuries by the Howard family. Here you will find objects as disparate as a child's wheelbarrow and an ornate table topped with precious Blue John stone. 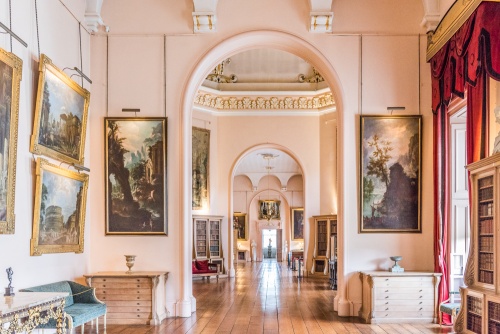 Leading from the Museum Room is the Long Gallery, a delightfully spacious corridor stretching 160 feet, and lined with books, musical instruments, and fine furniture from across the globe. The Long Gallery was built to a design by Charles Tatham, and has always been used as a space to display some of the finest larger pieces of art and furnishings in the Howard collection, as well as providing a place for indoor recreation in inclement weather. There are some fine large landscape paintings, and numerous smaller family portraits.

The Howard family chapel, reached from the end of the Long Gallery, has been in use since the late 18th century, but the chapel as it exists today is largely the work of Lord Lanerton, brother of the 8th Earl.

Though small, the chapel is quite lovely and evocative, with richly coloured stained glass windows by Edward Burne-Jones shedding a soft light upon the interior furnishings. Much of those furnishings are gilt, and colour is everywhere. For a quick look at the chapel furnishings, see the Castle Howard Photo Gallery. 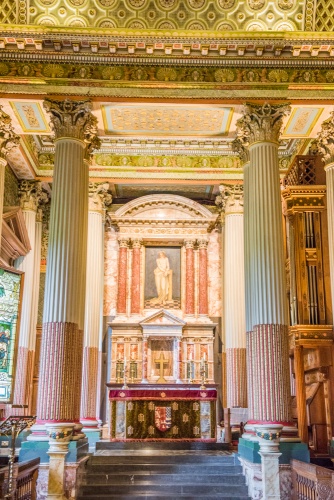