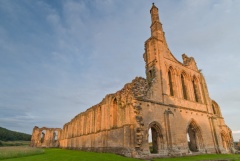 Byland Abbey
Byland Abbey - A ruined medieval abbey best known for its rose window and lovely geometric floor tiles.
Duncombe Park - An Italianate baroque house begun 1711, set amid garden temples by Vanbrugh and William Robinson
North York Moors - The smallest of the National Parks, the North York Moors comprise a high plateau bounded on the north by the Plain of Cleveland and on the south by the vales of Pickering and York. The park is at its scenic best in August and September, when the purple heather is in bloom. On the north and south the moors are etched by deep valleys, or dales, and the eastern boundary of the park ends in a spectacular coastline.
Rievaulx Abbey - Once the largest and most important monastery in England. Rievaulx is an atmospheric ruin set in beautiful woodlands.
York - Exploring York's historic city centre is like taking a trip back in time. The city's rich cultural heritage dates back to Roman times, but the flavour of Viking Jorvik is still preserved, and the medieval architecture of the city is outstanding.
Castle Howard Guide:
History of Castle Howard
The House
Gardens and Grounds
Photo Gallery
Visiting Castle Howard
Best of Britain Express Art Prints