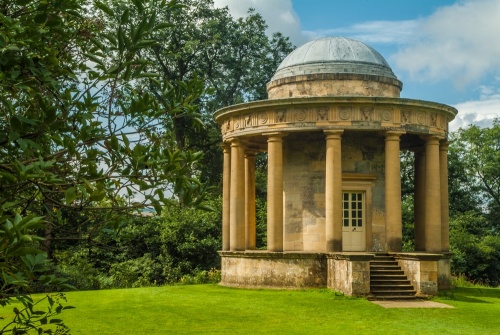 Rievaulx Terrace is a small Georgian landscape garden in lovely Ryedale, featuring a long, grassy terrace with a classical Ionic temple facing a Tuscan temple at the other end. The Ionic Temple has a superb painted ceiling depicting scenes from Greek myths. Rievaulx Terrace overlooks the remains of medieval Rievaulx Abbey on the floor of the valley below.

Rievaulx Terrace and Temples was begun around 1747 by Thomas Duncombe II, owner of the Helmsley estate.

Like most of his contemporaries, Duncombe went on a Grand Tour of Europe as a young man. And like many, he came home inspired by the great works of architecture he had seen abroad and looked for an opportunity to implement those same ideals on his own estate.

Duncombe was particularly inspired by the 'picturesque' philosophy expressed by artists such as Nicolas Poussin, a French painter who specialised in works of art full of religious and mythological symbolism. The Picturesque movement tried to recreate those symbolic paintings in nature, using the landscape as a vast canvas, while attempting to keep the carefully-arranged landscape looking natural. 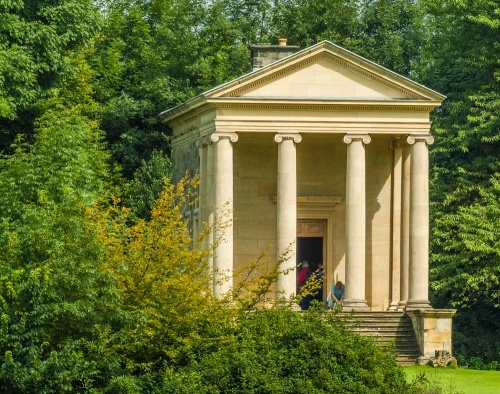 Duncombe's 'canvas' was a relatively flat terrace of land on a hill overlooking the ruins of Rievaulx Abbey, a 12th-century Cistercian monastery. The terrace is roughly 1/2 mile long. He placed neoclassical temples at each end of the terrace and created a dozen eye-catching views of the abbey ruins by carefully planting trees and shrubs to offer sudden glimpses of the historic building below.

He modelled his Tuscan temple (sometimes called the Doric Temple) on the dome of Castle Howard, near York, which was owned by his father-in-law the Earl of Carlisle. The tiled floor of the temple was scavenged from the ruins of Rievaulx Abbey. The underside of the dome was decorated with richly-detailed plasterwork, perhaps designed by Giuseppe Cortese. In the centre of the fresco is Ganymede, cupbearer to Zeus.

The Ionic Temple was modelled after the Temple of Fortuna Virilis in Rome. The temple boasts a ceiling fresco by the Italian artist Giuseppe Mattia Borgnis. Duncombe used the Ionic Temple as a banqueting house and furnished it with beautifully-crafted Georgian furniture.

The kitchens were located in the small basement below the banqueting room. Today, the kitchens house an exhibition on the landscape gardening movement in England. 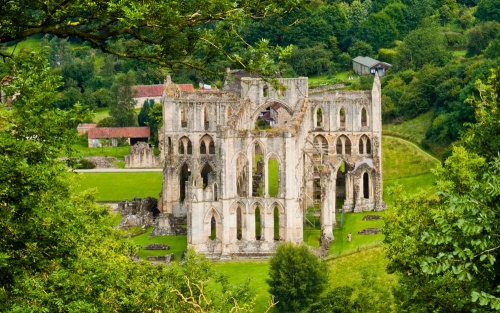 Rievaulx Abbey ruins from the Terrace

We do not know who designed the temples themselves but it may have been Sir Thomas Robinson, who was responsible for the west wing at Castle Howard. The Tuscan Temple furnishings are magnificent, with gilded mirrors and settees, and a finely carved fireplace. By contrast, the Ionic Temple interior is sparsely furnished, with a marble-topped table in the centre and Palladian-style windows.

The garden has a lovely display of flowers in the Spring, and enjoyable walks through the beech woodlands.

It is worth noting that there is no direct access from Rievaulx Terrace to Rievaulx Abbey, due to the steep nature of the terrain. To access the abbey you have to drive out of the Rievaulx Terrace parking lot and turn left on the road down to the abbey. 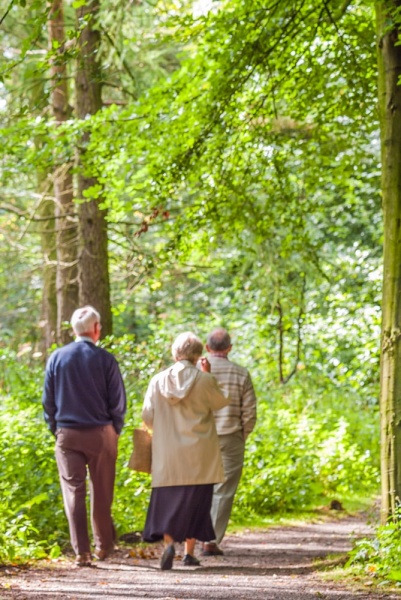 Rievaulx Terrace is off the B1257 north of Helmsley. Follow the signs for Rievaulx Abbey to the Rievaulx Bank turnoff, and take the first left onto the lane for the Terrace. Do NOT take Rievaulx Bank downhill towards the abbey and village.

More self catering near Rievaulx Terrace and Temples >>

More bed and breakfasts near Rievaulx Terrace and Temples >>