This is a 60-mile long coast of startling, rugged cliffs pounded by the Atlantic waves which make the area so popular with surfers. The coast begins on the sandy beaches just north of Bude, where sunbathers gather in force. Before you head for the beach, however, spare some time to visit the Heritage Coast Exhibition at the Visitor Centre in Bude.

The National Trust beach at Sandymouth is also a popular surfing area, but be aware that the tide can come in quickly and leave unwary walkers stranded.

At Morwenstow you can see the graves of shipwrecked sailors in the churchyard, where they were buried by the eccentric poet, Parson Hawker.

The stately home of Hartland Abbey was once an Augustinian priory. The 300 foot high jagged cliffs at nearby Hartland Quay are spectacular, and a short walk away brings you to Speke's Mill Mouth, a dramatic waterfall splitting the cliffs.

North of Hartland Point, which gives the coastline its name, lies the picture-postcard village of Clovelly, one of the most visited destinations in Devon. The white-washed 16th-century cottages of Clovelly hover on a clifftop above the harbour. So steep is the High Street that winds through Clovelly that cars are banned. Instead, donkeys carry visitors up and down the hillside. Or, if you prefer less adventurous transport, a Landrover service ferries visitors via backroads. 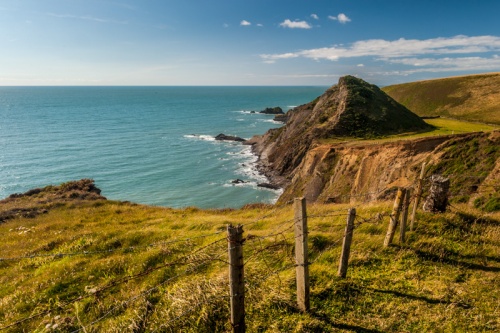 The South West Coast Path
Easily the longest and, in places, the most arduous, of England's National Trails. The path is actually the amalgamation of four paths; the Somerset & North Devon, Cornwall, South Devon, and Dorset Coastal paths. The route is quite popular, and it can be crowded in the summer months, though there are always long stretches where your only company will be a chorus of sea birds. More ...

North Devon AONB
This Area of Outstanding Natural Beauty takes in the Devon portion of the Hartland Heritage Coast, and extends inland to include the plateau around Hartland itself. In contrast to the rugged coast of the Hartland Point area, the AONB also covers the extensive sand dunes of the Braunton Burrows, and the beaches around Westward Ho!