This heritage coast runs from Brixham to Wembury, a distance of some 50 miles. Along the way, it takes in several nature reserves and popular sailing centres, and passes one of the finest gardens in England.

The area spanned by the coast coincides roughly with the South Hams region of South Devon. The name "hams" is an old Anglo-Saxon word meaning "sheltered place". The Gulf Stream ensures a mild climate for South Hams, with early springs and long summers. Five rivers flow down to the coast from the heights of Dartmoor, creating excellent harbours and sailing centres at Dartmouth, Salcombe, and Kingsbridge, among others.

There are a large number of beaches along the coast, including the broad sweep of Slapton Sands, with its freshwater lagoon, and more private sandy coves, like Blackpool and Thurlestone. The reed beds and marsh around Slapton Ley provide habitat for a large number of bird species.

Just a few miles from the coast at Ashburton the River Dart Country Park is set in 90 acres of a former Victorian estate. The park offers woodland walks along the Dart, family leisure facilities, and a variety of accommodation and camping options.

On the coast at Coleton is The National Trust garden of Coleton Fishacre. The garden was only begun in 1925, but the mild Devon climate makes it ideal for plants that like it wet, such as bamboos, mimosa, and subtropicals. There are rare trees, walled and terraced gardens, a circular pool and stream gardens, scented plants and herbs. 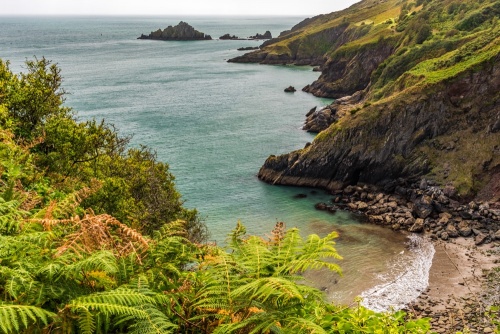 Rame Head Heritage Coast
This heritage coast takes in a low promontory housing an old Iron Age fort, a coastguard lookout, and a medieval chapel. On either side of the headland are isolated beaches, and the area is rich in birdlife. More ...

Dartmoor National Park
The landscape of Dartmoor is extraordinary; tall granite "tors" stand out atop two high plateaus split by the valley of the River Dart. On those plateaus, the famous Dartmoor ponies still graze. Dartmoor is also blessed with an abundance of prehistoric remains. More ...