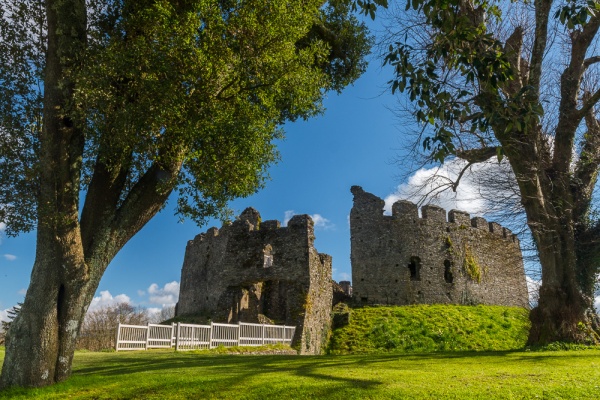 A massive circular shell keep built atop an early Norman motte and bailey castle, one of the most complete remaining examples in the West Country. The domestic buildings within the circular curtain walls are largely intact, as is the high wall. There was an outer bailey enclosing the site, but most traces of that are gone, leaving only the striking ruin of the stone-walled shell keep atop concentric earthworks, surrounded by a dry ditch and banks.,/p>

Sometime around 1100 the Norman Sheriff of Cornwall, Baldwin Fitz Turstin, erected a fortification on a spur of land above the River Fowey. Though I've described this as a 'motte and bailey' castle, in fact there is not a motte, or mound, simply raised earthwork banks. When the curtain wall was built in stone, the inner earthwork bank was removed.

We know very little about the earliest castle, which was built of wood, and the first time that Restormel enters the written historical record is in 1264, when the leader of the Baron's War, Simon de Montfort, seized the castle. Though the initial fortifications were in wood, the square stone gatehouse tower (now largely ruinous) was soon added.

The circular stone curtain which is Restormel's most unique feature was probably built by Robert de Cardinham, who was lord of the manor here from 1192-1225. Robert's curtain wall enclosed an area roughly 40 metres across, within the earlier earthworks. The curtain wall is over 2.5 metres thick (about 8 feet) and stands to the height of an inner wall walk protected by a parapet. 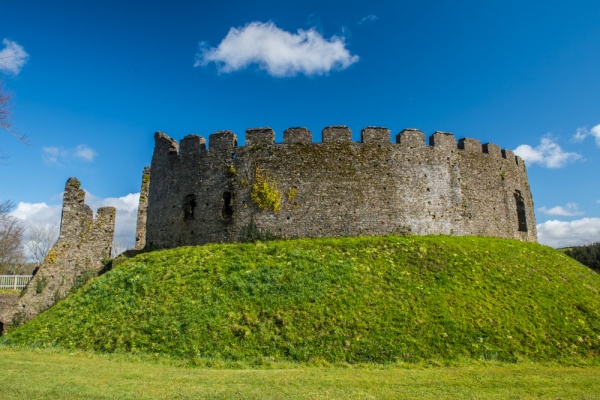 The castle from the south west

Around 1270 Restormel passed into the hands of the powerful Earls of Cornwall. When Earl Edmund chose to make the administrative centre of his estates at nearby Lostwithiel, Restormel became his major residence.

It was Earl Edmund who added the curious set of curving chambers backing onto the curtain wall, effectively creating a concentric castle with kitchens, hall, guest accommodation, and private solar inside the castle walls. See my rather simplified illustration of this layout below.

All the main chambers except the kitchens were built atop storage cellars. The chapel, reached through a small ante-chapel, projects through the curtain wall. The castle was surrounded by a large deer park covering 300 acres.

When Earl Edmund died in 1299 the Earldom of Cornwall reverted to the crown, and Restormel lost its importance. After the Duchy of Cornwall was formed the castle was essentially ignored and left to decay, save for a short period in 1354 when Edward, The Black Prince, son of Edward III, held court here as the first Duke of Cornwall. But when Edward died in 1376 the castle was left unused again.

There was a brief moment on the historical stage for Restormel in 1644 when Royalist forces under Sir Richard Grenville briefly occupied it, ousting a Parliamentarian garrison, but after this brief interlude, it was left to slumber once more, falling into complete disrepair until taken into state care in 1925. It is now officially owned by the Duchy of Cornwall, but cared for by English Heritage. 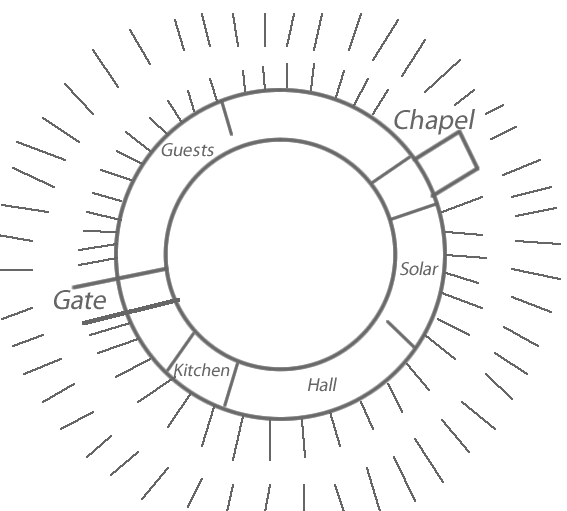 A stylised plan of Restormel Castle
The most interesting feature is the way the entire suite of chambers, including kitchens, great hall, private solar, and guest accommodation, are all arranged within the same concentric shape of the outer castle walls.

The only break from the circular layout is the gatehouse, with an attached drawbridge over the surrounding ditch, and the projecting chapel in the opposite wall. Note that the ditch is sometimes described as a moat, but to the best of my knowledge, it was never filled with water and was simply a dry ditch, whose effectiveness as a defensive structure was emphasised by the steep sides of the earthwork banks.

Visiting Restormel
The castle is set in a lovely wooded location above the river. The views are fabulous, and the grounds are popular for their display of daffodils and bluebells in the Spring. We visited with our young children, and they had a wonderful time exploring the ruins. We thoroughly enjoyed ourselves and can highly recommend a visit.

There is only a small parking lot, but to be honest, even on a nice summer day there were only a few people about. It seems that Restormel is not as well-known among visitors as other Cornish castles, but it should be; its an externally perfect example of a medieval shell keep, and should be better known! 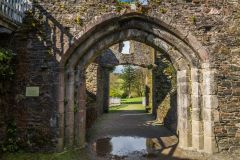 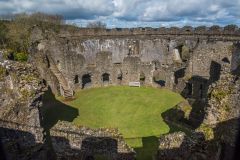 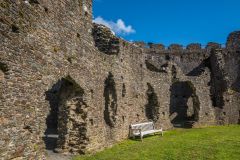 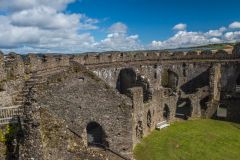 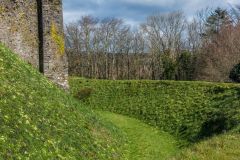 More self catering near Restormel Castle

Self Catering near Lostwithiel