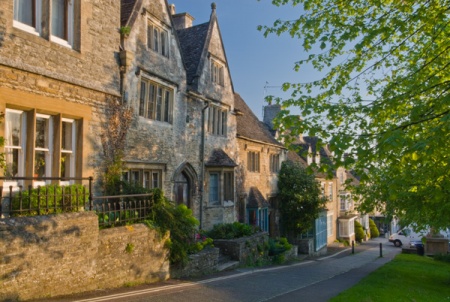 "The Gateway to the Cotswolds"

The lovely town of Burford occupies a position on the meandering River Windrush. Burford is built on a fairly steep hill, and the view from the top of the hill looking down the High Street to the river is one of the classic panoramas of the Cotswolds.

A lovely 4-arched medieval bridge, widened in the 18th century, crosses the Windrush, and though Burford itself does not occupy the northern bank, a walk across the bridge is rewarded by wonderful views across watermeadows to the spire of St. John the Baptist parish church.

The name of the town gives a clue as to its past. It comes from a union of the words "burh", meaning a defended town, and "ford" meaning a river crossing. Though we are not sure when the area was first settled, we know that there was a small community of 200 here at the time of the Domesday Book in 1086.

Shortly after, Burford became the first Cotswold town to be granted a market charter - the exact year is uncertain, but it was prior to 1107. 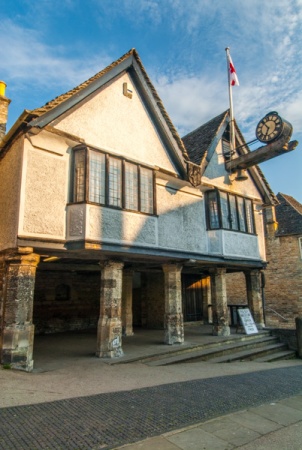 Burford offers much more variety of styles and periods than most Cotswold towns. The most striking example of this being the number of half-timbered buildings to be seen. One of the most striking is The Tolsey, roughly halfway along the High Street. This is a striking medieval building raised on timbers, with an open space beneath, where once wool merchants gathered and collected tolls. It now houses a small local museum.

The heyday of Burford's prosperity stretched from the 14th to the 17th century, when the wool trade was at its height. Many of the most interesting buildings along the High Street date from this period.

A short walk down Priory Lane leads to the old priory, now a private Benedictine monastery. The priory has a chequered past; it was here that Nell Gwynn and Charles II met in secret. Their son was later created Earl of Burford.

Turn off High Street at Lawrence Street, where a very short walk leads past the old Burford Grammar School, founded in 1571, to Church Green, a surprisingly open space before the gates of St John the Baptist church. Across Church Green is a lovely row of almshouses, erected in 1457 by Richard Neville, Earl of Warwick ("The Kingmaker").

Turn off High Street onto Sheep Street, which leads past a lovely terrace of cottages to The Lamb Inn, thought to be the oldest inn in Burford.

Burford's parish church is one of my personal favourites in this region. The slender spire is very striking, and the setting beside the Windrush is lovely. The best of St John the Baptist is to be found inside; the nave and aisles give a wonderful impression of height and light. The church was begun c. 1175, though much of what can be seen today dates from major restoration in the late medieval period.

HERITAGE FOOTNOTE
Designer William Morris was moved to found the Society for the Preservation of Ancient Buildings after visiting Burford in 1876. He found the vicar of the day busily scraping off medieval wall-paintings. When Morris protested at this disregard for historic work, the vicar famously replied, "This church, sir, is mine, and if I choose to, I shall stand on my head in it."

Despite the truculent vicar's efforts, sizeable areas of medieval wall-paintings remain. Even more interesting is the small carving high on the side of the tower; this is thought to be pre-Christian in origin, and dated to c.100 AD. 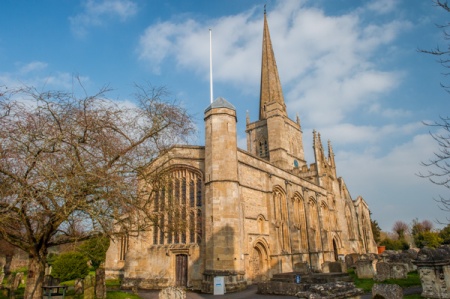 The most notable aspect of the church is the memorial to Sir Lawrence and Lady Tanfield (1628), to found in St. Catherine's Chapel. I use the word "notable" with care, as the Tanfield monument is something you will either love or hate.

Sir Lawrence was Lord of the Manor in Burford, and Chief Baron of the Exchequer to Elizabeth I. He was reviled locally for his high-handed interference in local affairs and had a reputation for greed and corrupt practices in office. Indeed, for two centuries after his death, Burford residents gleefully burned an effigy of Lord Tanfield each year.

Suffice it to say that only his wife would have thought a memorial necessary. To accomplish this, she peremptorily took over St Catherine's Chapel and erected there a quite astonishing memorial structure that is equal parts ostentatious, overwhelming, and garish.

That said, the carving is wonderful, and there is no doubting the craftsmanship of those responsible for carrying out Lady Tanfield's orders. Stoop down to look under the monument and you will see a representation of a gaunt skeleton, a reminder, one presumes, of the fate that awaits us all, even those as rich as Sir Lawrence.

On the north side of the north aisle look for the memorial of Edmund Harman (1569). On the front of the memorial is a carving thought to be the earliest example in the UK depicting South American Indians.

Burford in the Civil War

In May 1649, troops in the Parliamentary army mutinied at Salisbury. They marched north, hoping to join up with other discontented soldiers. They rested the night of May 14 at Burford, were army leaders Oliver Cromwell and Sir Thomas Fairfax caught up with them. After a brief skirmish, 340 of these "Levellers" were incarcerated in the church. Carvings made by the prisoners can be seen inside the church.

Most notable of these is preserved inside the font, where visitors can read the inscription, "Anthony Sedley 1649 Prisner". A plaque on the exterior of the south wall of the church recalls the execution of three Levellers, who were shot against a nearby wall, while their fellows were forced to watch from the church roof.

Burford can be very busy. Finding a parking space along the High Street is a hit and miss business. Instead, follow the signs to the free parking lot located east of the High Street. 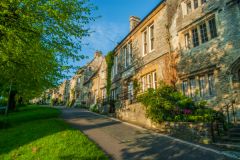 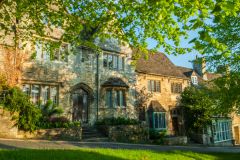 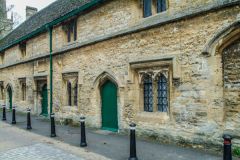 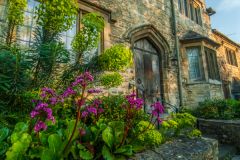 More self catering near Burford

More bed and breakfasts near Burford

Self Catering near Burford