One of the major features in the development of early medieval Scotland, and one that would have a profound effect on Scottish history, was the influence of English customs, law, and culture. After the Norman invasion of England in 1066 many Saxon nobles fled north to Scotland and settled in the Lowlands. The most famous of these was St Margaret, who introduced many English customs after her marriage to King Malcolm Canmore. But the Anglicisation of Scotland went much further than that.

Margaret helped reorganise the Scottish church to bring it more in line with Roman Catholic practice, and brought in priests from England. These moves did not win her any popularity; quite the opposite! Her sons fled the country after her death to avoid reprisals. There was strong feeling against the influx of English customs and settlers.

A succession of weak Scottish rulers allowed Normans to begin to exert control in Lowland Scotland. William II of England helped Edgar, nephew of Edgar the Atheling, establish himself as king. Edgar responded by acknowledging William as his feudal lord.

When Edgar died in 1107 he divided his lands into two parts. The southern Lowlands were held by his brother David as a vassal of the English king. The Highlands was held by another brother, Alexander, in his own right. Between them Alexander and, especially, David, helped spread the Norman ideals of feudalism, based on the concept of direct ties of obligation between a lord and vassal rather than to the king. When Alexander died, David ruled both parts of the kingdom, thereby uniting Highlands and Lowlands into one entity.

Royal Burghs
This period of 'Normanisation' coincided with the growth of royal burghs. These were new towns, based on trade, built around royal castles or river mouths where ships could easily dock. The king encouraged foreign merchants to set up business in the burghs. Many of these merchants came from England, Normandy, Flanders, and Denmark. He granted these 'burgesses' many trading rights, such as the right to hold markets, annual fairs, and charge tolls.

In exchange, the burgesses paid taxes and other fees directly to the king. The king protected burghs from normal feudal obligations; burgesses did not owe normal feudal dues nor were they required to give feudal service to an overlord. 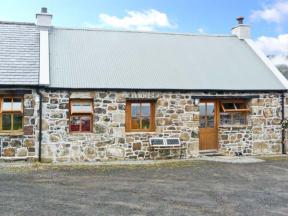 This semi detached cottage is located in the village of Staffin on the Isle of Skye and can sleep three people in one bedroom.
Sleeps 3