Abbeys and Monasteries in Carmarthenshire 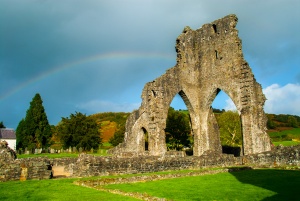 A rainbow over Talley Abbey

Talley Abbey
Cadw
A Premonstratensian house founded by Rhys ap Grufudd in 1184. The nave of the church was never finished, perhaps due to lack of funds, and the church was ceded to the crown in 1381. The old presbytery was used for the parish church until late in the 18th century.

Whitland Abbey
near Whitland
The first Cistercian house of Whitland was founded in 1140 near Carmarthen, though in 1151 the monastery moved to its present location. There are very few remains to be seen, and the legacy of Whitland must be that it helped establish so many other monastic houses throughout Wales.