Carmarthen Castle
Carmarthen, Carmarthenshire
There was a Norman castle here as early as 1094, though perhaps in a different location. By 1105 the current castle occupied its perch on an outcrop above the River Tywi. The original motte was augmented by stone defences in the early 13th century. The curtain wall was added later in that century, and a gatehouse and south-west tower in the 14th century. Carmarthen was sacked by Owain Glyndwr in 1405, and later passed to Edmund Tewdwr, father of the future Henry VII. In the late 18th century the castle was converted to use as a prison. 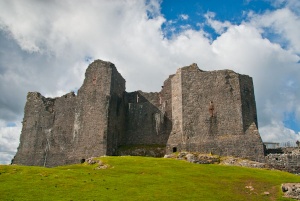 Carreg Cennen Castle
In Trapp, near Llandeilo, Dyfed
A 13th-century ruin atop a sheer cliff, Carreg Cennen is one of the most dramatically sited of Welsh castles. It's a stiff climb, but worth it just for the atmosphere. The site may well have been used by the Romans, as finds of Roman coins and even earlier skeletons have been made here. Lord Rhys (Rhys of Deheubarth) built a more permanent castle here in the late 12th century, though it was later taken by Edward I of England in 1277.

The Welsh castle was rebuilt in impressive style by John Giffard. Several towers and portions of the curtain wall still stand, albeit in a crumbling state. much of the interior buildings have been badly damaged, a result of military action in the Wars of the Roses. One unusual feature of Carreg Cennen is the natural limestone cave beneath the castle, reached by walled passage.

Castell Du (Sennybridge Castle)
At Sennybridge, Carmarthenshire, A40, on private land.
Native Welsh castle built c1260 has only fragments surviving: a tower and a curtain wall.

Dinefwr Castle
1 mile west of Llandeilo, Carmarthenshire
The castle is sited on a hilltop overlooking the Tywi valley, providing wonderful views. Legend tells that the first castle at Dinefwr was built by Rhodri Mawr in the 9th century. That early fortress may have been dismantled at the orders of Llewelyn the Great and the present stone castle built in the early 13th century.

Dinefwr passed to the English crown in 1276. A large round keep stands within a curtain wall, and a round tower in the north-west of the inner ward also survives relatively intact, while some of the residential buildings within the inner ward have been partly restored.

Dryslwyn Castle
Five miles west of Llandeilo, B4297 from A40 or B4300. Cadw. Open site.
Built c1250 by Welsh lords on a steep hill. Scant remains of a hall and keep walls survive of the castle besieged and undermined by Edward I. 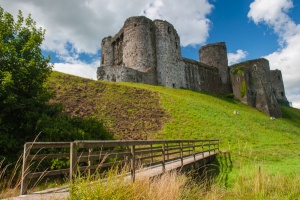 Kidwelly Castle
Kidwelly Castle is under the care of Cadw.
In the town of Kidwelly on the A484.
Kidwelly Castle has an inner ward with four round towers that provided domestic rooms. Later it was added onto and become a concentric castle with walls within walls. A hall block, chapel and outer stone curtain wall were added. A twin-towered gatehouse guarded the entrance. Guardrooms, a dungeon and other rooms were located here. In the 1500's more rooms were added in both the inner and outer wards. The castle fell into decay less than a hundred years later.

Laugharne Castle
At Laugharne, Carmarthenshire sited on the Taf River estuary. Access from A4066 St Clears. Cadw.
This is a medieval castle that was transformed into an Elizabethan mansion. The outer ward has a large diamond-shaped curtain wall. A gatehouse is on the north side. The inner ward has two large round towers, connected by a Tudor hall. There is a small garden.

Llandovery Castle
In the town of Llandovery, A40, overlooking the River Bran. Open access.
Small ruin on the hill of a motte, built c 1100. It changed hands a number of times between the Welsh and English.

Llangadog
At Llangadog, A4069. Cadw. May be viewed from road or footpath.
Motte and bailey earthworks with a modern house in the centre.

Llansteffan Castle
In Llansteffan, Dyfed
Perched on a headland overlooking Carmarthen Bay, this ruined 12th-century castle shares the history of its site with an Iron Age fort built in approximately 600 BC. Much is in ruins, but the twin towered gatehouse still looms large.

Newcastle Emlyn
On A484, southeast of Cardigan.
Castle remains consist of some walls and a gatehouse that was an administrative, rather than defensive, building. It was blown up during the Civil War.