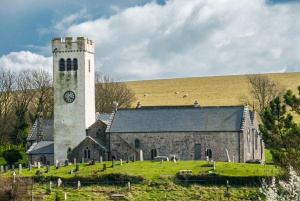 Sometime in the 6th century, a Celtic monastery was established by St Pyr on a hillside site at Manorbier. The saint gave his name to the location, for Manorbier evolved from the Welsh for 'belonging to Pyr'. You can see evidence of the Celtic monastery in the circular shape of the churchyard.

St Pyr was also the first abbot of the monastery on Caldey Island. The Welsh name for Caldey is 'Ynys Byr', or 'Pyr's island'. Pyr is said to have died after falling down a well while drunk, though it isn't clear from historical accounts whether that well was on Caldey Island or at Manorbier. It seems plausible that the saint was buried at the monastery he established at Manorbier, which would place his grave under or near the present church.

In the middle of the 12th century a Norman church was built on part of the earlier monastic site. By that time Manorbier Castle had been built on the opposite hillside by the De Barri family, and the De Barri's probably had a hand in establishing a new church here.

The most famous member of the De Barri family was Gerald, fourth son of Odo de Barri who built the first castle. Gerald became famous as Gerald of Wales, known for his scholarship and historical writings. Gerald recounts taking shelter from a storm inside St James' church in 1153, when he was 7 years old. 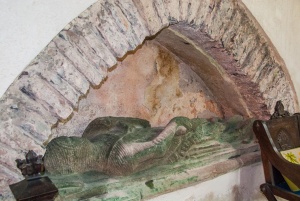 In 1301 Sir John de Barri gave St James' church to Monkton Priory in Pembroke. That priory was itself granted to the Abbey of Seez in Normandy, making it an 'alien house'. During the Hundred Years War all alien houses lost their rights to tithes, so Manorbier would have been an independent church.

The oldest part of the present building is the striking west tower, which dates to the middle of the 12th century. The nave may be 12th century as well, but the chancel is mostly 13th and 14th century, and the entire church was remodelled in the Victorian period. The most interesting historic feature is the exceptional nave arcade vaulting, which will have architectural historians in raptures.

In the chancel is a 14th-century effigy of a De Barri family member, possibly John de Barri, who died in 1324. On the north wall are the royal coat of arms to William IV, painted on wooden boards and looking rather the worse for wear.

There are 2 fonts, one small octagonal one, set on a modern base, and another possibly Norman font with scalloped edges to the bowl. In the vaulted porch you can still make out remnants of medieval paintings on the ceiling.

Restoration work during the Victorian and Edwardian periods brought St James church one of its great treasures; a series of excellent stained glass windows by some of the finest craftsmen of the time. There are several windows by the Joseph Bell company of Bristol, and a WWI memorial window by the Burlison & Grylls firm.

The location is utterly superb, with views across to the castle and out over Manorbier beach. If you follow the coastal path east from the church you come to the King's Quoit cromlech. 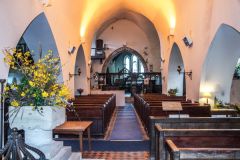 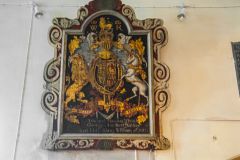 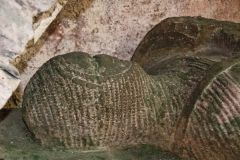 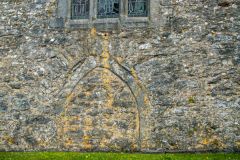