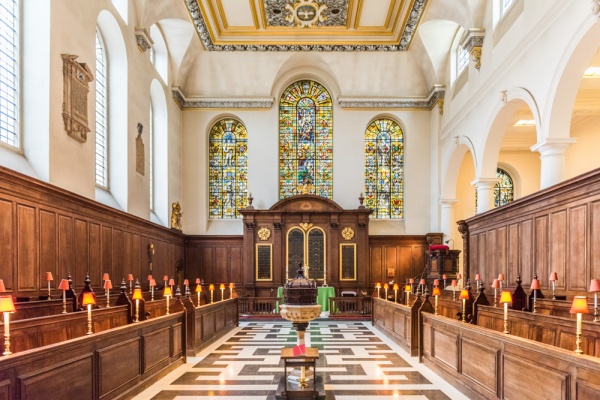 Just a few steps from St Paul's Cathedral stands the historic church of St Vedast-alias-Foster. The unusual hyphenated dedication deserves some explanation. Vedast was a 6th-century bishop of Arras in northern Gaul, who converted the Frankish king Clovis to Christianity and acted as the royal tutor.

Vedast was known as St Vaast in Normandy and St Gaston in France. His name was gradually anglicised into St Foster in England; from Vastes to Fastes, Faster, Fauster, and finally Foster. So the dedication is quite practically showing that Vedast is an alias of Foster.

The first church on this spot was built before AD 1170. It was rebuilt in the early 16th century when Henry Coot, Sheriff of London, built a chapel dedicated to St Dunstan here It was extended in 1612 and remodelled in 1643, when the interior walls were inscribed with Biblical texts.

It was badly damaged by the Great Fire of London in 1666, but not so badly that it needed to rebuilt as so many other London churches did. It was quite quickly repaired by the parishioners and reopened, but perhaps those repairs were a little too speedy, for it soon became obvious that the church needed a more thorough rebuilding. Sir Christopher Wren was called in to completely rebuild the church, a process that he completed by 1673 at a cost of £1,853, 15 shillings, and 6 pence.

Wren removed most of the medieval structure, though a section of medieval stonework incorporated into the south wall was revealed during cleaning in 1992. 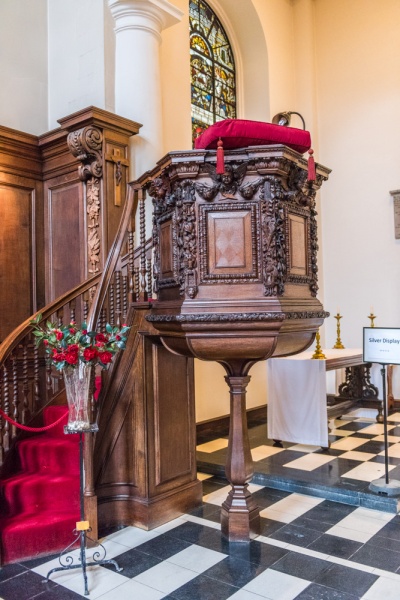 The 17th-century pulpit by Grinling Gibbons

The exterior highlight of St Vedast is the striking spire, which rises in three stages of diminishing size. The spire was almost an afterthought, added in 1712, after the church restoration was already complete. It is thought to be the design of Wren's assistant, Nicholas Hawksmoor, who would go on to become one of the great architects in English history.

Wren's elegant church was badly damaged during the Blitz. On the night of 29 December 1940 the church was hit by bombs and left a roofless shell. Only the walls, tower, and steeple survived the devastation.

A proposal by Sir Hugh Casson would have left St Vedast and several other London churches as was memorial ruins, but the proposal was rejected. The church was rebuilt within the 17th-century walls under the direction of architect Stephen Bower. The process was overseen by a parochial council which included the poet John Betjeman.

Bower designed the interior in the style of a collegiate church, with rows of benches facing each other across what was originally the south aisle. He also furnished the church with an array of historic 17th and 18th-century furniture from other churches damaged during the war. Look for the 17th-century swordrest used by the Lord Mayor of London when he visited the church of St Anne and St Agnes on Gresham Street.

You enter through early 17th-century oak doors that have remarkably survived both the Great Fire and the Blitz. Inside the doors is a small foyer with a war memorial and information about the church. Beyond the foyer you find yourself facing the font and its beautifully carved wooden cover. They were brought here from St Anne and Agnes. The font was designed by Sir Christopher Wren and the cover was carved by Wren's frequent collaborator, Grinling Gibbons. 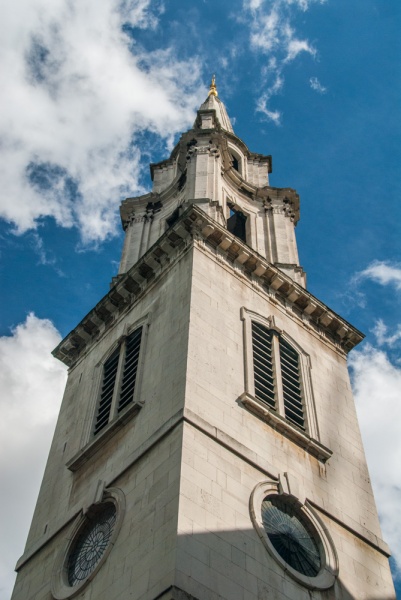 Behind the altar is a painted 17th-century wood reredos from St Christopher-le-Stock church in Threadneedle Street. Above the reredos is the 'Vedast Window', with stained glass depicting scenes from the life of Vedast. Look for the saint chasing a bear from its cave and destroying the beer barrels of invading pagan warriors. The south-east window shows St Remigius, Bishop of Rheims, who baptised King Clovis in AD 496. The north-east window shows Queen Clotilde, Clovis' widow.

Over the vestry door is a gilded royal coat of arms. Look up and you see the magnificent ceiling, with gold leaf gilded carvings enlivened with modern aluminium detailing. The effect is breathtaking.

The exquisite 17th-century wineglass pulpit was made for All Hallows, Bread Street. It was carved by Grinling Gibbons, and if you look closely you can spot Gibbons' trademark open pea pod. Gibbons' original carvings have been supplemented by modern carvings depicting the church bells falling during the Blitz, a phoenix rising from the flames, and the church doors mentioned earlier.

Over the entrance is a magnificent 1731 organ, originally made for St Bartholomew-by-the-Exchange. The organ was restored in 1962, re-using some of the original stops and all of the original pipes.

In the Lady Chapel is an altar made from pieces brought from All Hallows, Bread Street after the Blitz. Behind the altar is a 16th-century tabernacle and the chapel window above it is filled with glass made by the famous London firm of Clayton and Bell. It was salvaged from the ashes of the church after the Blitz bombing. 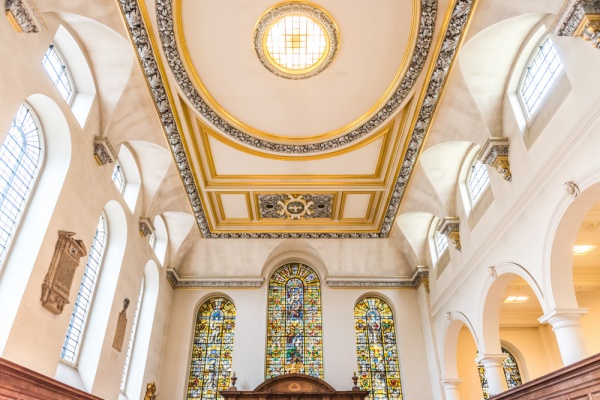 Over the chapel's west door is a 17th-century gilded sculpture of the Dove and Glory. Also in the chapel is a display case exhibit the church's collection of silver plate.

In the cloister outside the church is a section of Roman mosaic flooring discovered when St Matthew Friday Street church was torn down in 1884. Near the Roman pavement is an inscribed stone given to Canon Mortlock by the government of Syria. It was found by Sir Max Mallowan, husband of author Agatha Christie, at Kalhu, on the border of Iraq.

It seems a rather odd bit of archaeology in a London church, but then St Vedast-alias-Foster is not your ordinary church, even by London standards; it is an exceptional historic building made up of bits and pieces of other historic buildings. The church is open regularly to visitors and is well worth a visit, especially for the exceptional interior and its carvings by Grinling Gibbons. 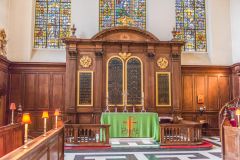 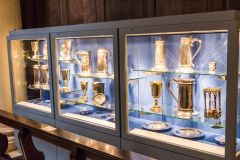 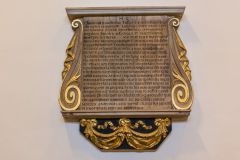 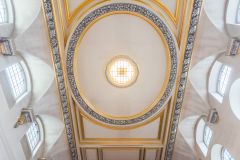