Palladianism is, loosely, a philosophy of design based on the writings and work of Andreas Palladio, an Italian architect of the 16th century who tried to recreate the style and proportions of the buildings of ancient Rome. 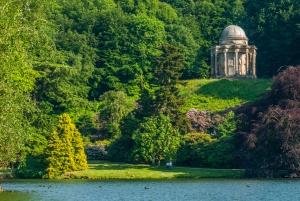 Stourhead Gardens, Wiltshire
Palladio himself was heavily influenced by the writings of the Roman architect, Vitruvius. He also made several erroneous assumptions about Roman domestic architecture based on partial remains of classical temples, but his ideas and philosophy were widely imitated throughout Europe, and particularly in 18th century England. The first popularizer of Palladian style was Inigo Jones, Surveyor-General under James I. Jones was responsible for several very early classical buildings, notably Queen's House, Greenwich, and the Banqueting House at Whitehall. In many ways, Jones was ahead of his time, for it was not until well into the 18th century that adherence to the classical ideals of Palladio became truly widespread in England.

What characterizes English Palladian architecture? In a nutshell, grace, understated decorative elements, and use of classical orders. At its most rigid, Palladianism simply copied designs made popular in Italy by Palladio. Thus Colen Campbell (1676-1729) produced the square symmetrical block of Mereworth Castle, Kent, in imitation of Palladio's own Villa Capra.

Unfortunately, this design, and others like it, ignored the fact that Palladio was designing for the sunny climes of his native Italy, and not for the grey skies of England. These Italianate buildings tend to be among the least appealing of the classical movement in England, and physically, as well as artistically, cold.

But better was on the way, led by Richard Boyle, Lord Burlington (1694-1753), the foremost patron of the arts during the mid-18th century. More than any other person, Burlington was responsible for the popular success of Palladianism and the classical style in general in 18th century England. 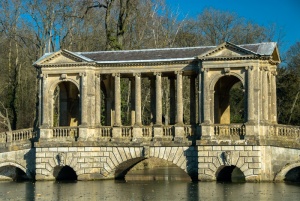 Palladian bridge at
Stowe Landscape Garden
Palladianism paid a great deal of attention to the alliterative, or symbolic nature of architectural elements. Thus, a mock temple of Ares (the Greek god of War) was not simply a building but might symbolize war in the English world. The relationship of that temple to other architectural elements made a statement of the builder's philosophy. Nothing was "just" a decorative element.

Perhaps the most striking examples of the use of architectural elements to make a philosophical statement can be seen at Stowe (Buckinghamshire) and Stourhead (Wiltshire).

The 18th century saw a huge growth in the number of ostentatious country houses such as Stowe and Stourhead. A whole new class of wealthy merchants and landed nobility vied to outdo one another in the building of lavish countryside estates and gardens. It is in the design of these country house estates that Palladian principles are most evident today. 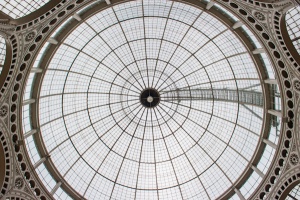 One of the names most associated with Palladianism is that of Robert Adam. Adam, though a Scot, was based in London, where he became the most sought-after architect of his day. Although he was heavily influenced by Roman classicism, Adam baulked at the slavish adherence to Roman style and proportions advocated by his peers. Instead, he used Roman style as a starting point for his own style, which can best be called "neo-classical". Adams designs are seen at their best at Syon House, Kedleston Hall, Harewood House, Osterley, and Kenwood House.

Palladian ideas and examples were widely disseminated through several influential books. Volumes such as Colen Campbell's Vitruvius Britannicus and William Kent's Designs of Inigo Jones were lavishly illustrated, and many Palladian architects took their inspiration from the detailed drawings in these "design manuals".

Bronte is best known for the novel Wuthering Heights

This king was only nine months old when he became king


His inheirited the throne in 1422

His father was Henry V, his mother Catherine of France