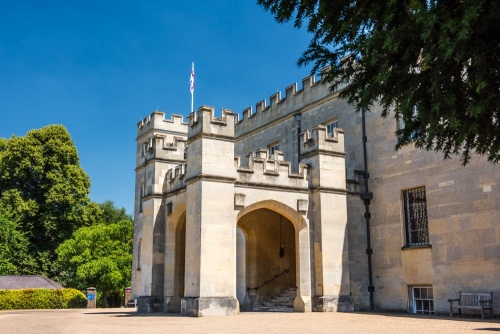 Syon House
The London home of the Percy family, Dukes of Northumberland, Syon House is set in wonderful parkland on the banks of the River Thames, opposite Kew Gardens. The plain exterior of the house hides a superlative Robert Adam interior begun in 1762 on much older foundations. 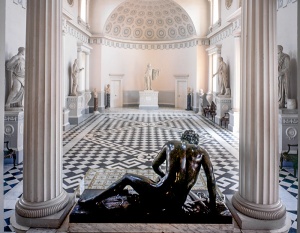 The Dying Gaul and the Great Hall

In 1415 the Brigittine, or Bridgettine, order of nuns established an abbey beside the Thames, under the patronage of Henry V. They named their abbey Syon, after Mount Zion in the Holy Land. They quickly realised that the low-lying site was unsuitable, and in 1431 they moved their abbey to what is now Brentford, on the north bank of the river.

Over the next century, Syon Abbey became widely known as a centre for learning, with a renowned library. Not only scholars and clerics visited Syon; Catherine of Aragon, first wife of Henry VIII, came here, but that did not stop Henry VIII from dissolving the abbey in the English Reformation.

In 1535 the Father Confessor of Syon, Richard Reynolds, refused to accept the king's supremacy as head of the church in England. As a result, he was executed and his body placed for all to see atop the abbey gateway. Reynolds was later canonised as a Catholic martyr. 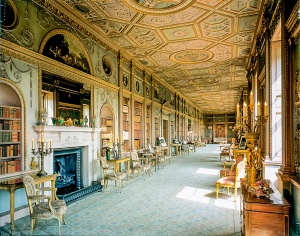 In a curious twist of fate, Henry's body rested overnight at Syon as his coffin was being taken to Windsor for burial. The coffin burst asunder in the night, and the royal retinue awoke to find dogs feeding on the dead king's remains. This rather gruesome fate was considered by some as an act of divine retribution for Henry's dissolution of Syon.

When the abbey was dissolved, the monastic estate was seized by the crown, and eventually passed to the 1st Duke of Somerset. After Henry's death, the Duke was named Lord Protector on behalf of the young prince, Edward VI. Somerset was the virtual ruler of the kingdom, and a man of immense wealth and influence. He transformed the former abbey into a glorious new house in Italian Renaissance style. 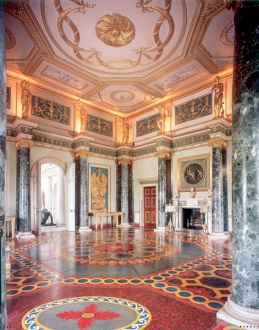 But for all his wealth, Somerset could not hold power, and he was toppled from his position in 1552 and executed for treason. His great rival John Dudley, Duke of Northumberland acquired the new mansion, and it was here at Syon that he offered the crown of England to his niece, Lady Jane Grey, after Edward's death.

From Syon, the 'Nine Days Queen' was taken to London and proclaimed queen, but Dudley's plans collapsed, and he was executed when Queen Mary I took the throne.

Mary, a staunch Catholic, invited the nuns to re-establish the abbey in 1557, but when Mary died the following year the nuns left once more. Finally, in 1594 Henry Percy, the 9th Earl of Northumberland, acquired Syon by marriage, and the house has been in the Percy family from that day to this.

The 10th Earl was known for his impartial stance during the Civil War, and as a result, he was named Governor to the Duke of York, the future James II. Charles's youngest children stayed at Syon during the king's imprisonment in 1646. Charles was allowed to visit them here, and it was probably on one of these visits that Sir Peter Lely painted a famous painting of the king with the Duke of York, which now hangs in the Red Drawing Room. 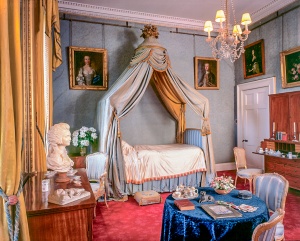 In 1766 the 1st Duke and Duchess of Northumberland decided to completely rebuild the earlier house. They called in Robert Adam, the most fashionable architect of the day, to redesign the interiors of Syon, and Lancelot 'Capability' Brown to lay out the parkland in the new English Landscape Garden style.

Syon is one of Adam's masterpieces, a stunning neo-classical arrangement of rooms built off an awe-inspiring entrance hall. Syon set the standard for Adam's architecture, which was to dominate English stately homes for the rest of the 18th century. 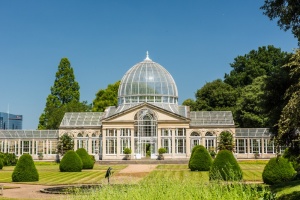 A masterpiece of neo-classical style, the hall was intended by Robert Adam to recreate the splendour of a Greco-Roman palace. The effect is simply stunning, with decorative stucco and a striking chequerboard pattern of black and white tile.

At one end of the hall is Syon's most famous piece of art, a statue known, quite descriptively, as 'The Dying Gaul', showing a wounded warrior breathing his last.

That's just the taster, for the Great Hall leads to the Ante Room, an amazing chamber with columns arranged around the walls of an open, faux-marble floor evoking the glory of ancient Rome. It is hard to overstate just how colourful and ornate these interiors are; you simply have to experience them for yourself!

Capability Brown laid out 200 acres of parkland at Syon, including 40 acres of gardens and an ornamental lake. Within the gardens are over 200 varieties of rare trees. This 'Pleasure Ground' is dominated by a slender column topped by a statue of Flora. Within the garden is an icehouse built in 1760. 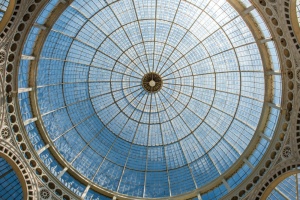 In 1831 the 3rd Duchess was named Governess to Princess Victoria, later Queen Victoria. The bedroom used by Victoria during her 6 years at Syon, and that used by her mother the Duchess of Kent, are just as they left them and still retain their beds.

Just before Victoria first came to Syon, the Great Conservatory was built a short distance from the house. This astonishing conservatory was the very first large building of metal and glass in the country and is a forerunner of the Crystal Palace built 20 years later for the Great Exhibition of 1851.

The conservatory is an amazing building, so full of light it seems ready to float away. It must have made an indelible impression on 19th-century visitors.

The architect was Charles Fowler, who used gunmetal, Bath stone, and glass to create a vast, domed space, designed to show off the Duke's collection of exotic plants. 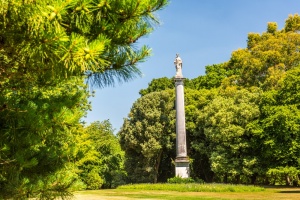 Beyond the Great Conservatory lie the gardens, centred on The Lake, a serpentine waterway crossed by picturesque bridges at each end. North of the lake is Flora's Column, a late 18th-century column in neo-classical style. The column is 60 feet high and is topped by a statue of the Roman goddess Flora, the goddess of flowers and of spring.

One other historic feature at Syon is easy to overlook. The modern - and very popular - garden centre is built around the oldest building at Syon, a 14th-century monastic barn, all that survives from the original monastery.

In 2003 the archaeologists of Channel Four's Time Team excavated at Syon in search of the original abbey church, which they discovered inside their allotted 3 days. Since the discovery an annual excavation has taken place on the site and continues to unearth new historic objects. 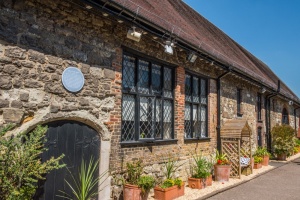 Syon Park is very much a family home, albeit on a very grand scale. This point really came home to me during my last visit, a dreary, wet day in August. A room steward, glancing out the windows, spied some loose masonry. 'Oh, dear,' she sighed, 'the Duchess will be annoyed. We've only just had that area rebuilt'. Any homeowner can sympathise.

Syon Park is a truly outstanding historic house, an amazing Palladian vision with a rich and turbulent history that has involved some of the most fascinating people and events in English history.

I daresay Syon Park would probably receive more visitors if it was easier to reach by public transport. The nearest tube station is Gunnersbury, then you have to take the 237 or 267 bus to Brentlea Gate stop. Much easier is to take the overground rail service to Brentford from Waterloo.

From the rail station exit turn left on Boston Manor Road and follow it to Brentford High Street. Turn right and follow the High Street to the Syon Park entrance on your left. From the station to the house entrance it takes roughly 15-20 minutes.

If you come by car there is a parking area at the garden centre beside the main house gates. Syon Park is outside the London congestion charge area and can be reached off the M4/A4 or via Twickenham Road from the south.

Garden: Across the Thames from Kew Gardens. 40 acres of gardens begun by Capability Brown surround the mansion home of the Dukes of Northumberland. See a woodland garden, rose garden (separate admission), and lakeside walks. Best in: June for the roses.

More self catering near Syon Park >>