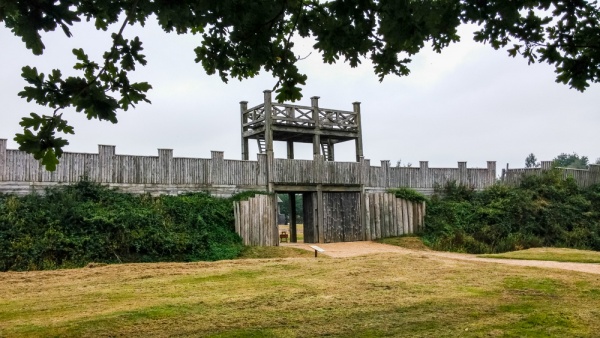 Lunt Roman Fort is a partially reconstructed turf and timber Roman fort dated to AD 60, with a unique 'gyrus', or circular training area for horses, a rebuilt granary, timber gateway and fort ramparts. 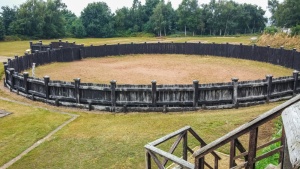 The Gyrus, or cavalry training ring

The fort at Lunt was built at the time of Queen Boudicca's revolt against the Romans in Britain, possibly as a supply depot and army headquarters. The location makes sense, as Lunt stands close to the junction of two major Roman roads; Watling Street and the Fosse Way, and overlooks a crossing of the River Sowe.

There were three phases of occupation; the first fort was occupied by a legion. After four years the garrison was downsized to a cohort, possibly indicating that the turmoil of Boudicca's rebellion had subsided. Several earlier buildings were torn down to make room for a gyrus, or circular enclosure for training horses. This gyrus is thought to be unique in the entire Roman Empire. After 20 years the fort fell out of use, and for a century it was left untouched until being briefly put back into service as a temporary fortification.

What makes the fort at Lunt so intriguing is that it has been partially reconstructed by the Royal Engineers, using traditional tools and techniques that the Romans would have employed, so that visitors can get a sense of what it might have looked like when new. The Engineers built an imposing timber gateway with adjoining ramparts, one of the granary buildings, and the gyrus.

Not only did this project enable visitors to get a more realistic idea of a Roman fort, it helped historians discover what techniques the Romans used in the building. The very grand gatehouse was modelled after images of Trajan's Column in Rome. 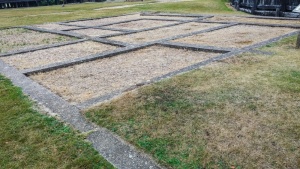 Foundations of the Valitudinarium,
or wash-house

It is the gyrus that really stands out; not only is it the only example of such a structure in Europe, its design meant that the typical rectangular fort pattern had to be altered. So at Lunt, the traditional fort outline is followed only on three sides, with a large bulge in the east side of the design to accommodate the gyrus.

To allow for this extra feature a huge amount of engineering work had to be done. Not only did the perimeter fort wall have to accommodate the gyrus, the presence of the circular enclosure meant that the traditional grid layout of buildings and streets within the fort had to be altered. This makes Lunt completely unique in the Roman Empire.

Excavations have revealed that the site was occupied again in the Saxon period, and once more in the Middle Ages.

Lunt is frequently used for school groups and educational visits and is a great place to give children a taste of life in Roman Britain. There is a small entrance fee charged. Be aware that public opening times are limited to the summer months and school holidays, so it's a good idea to check with the official website first. We were lucky enough to visit in summer, and found the fort a fascinating experience. The site manager gave us an enthusiastic potted history of the fort and its operation, which really helped make Lunt come alive.

The fort is located just outside Baginton village and is well signposted from the southern Coventry bypass roads. It lies just south of the A45/A444 junction.

The Granary at Fawsley - 17.2 miles
Daventry, Northamptonshire
Stay from: £50.00