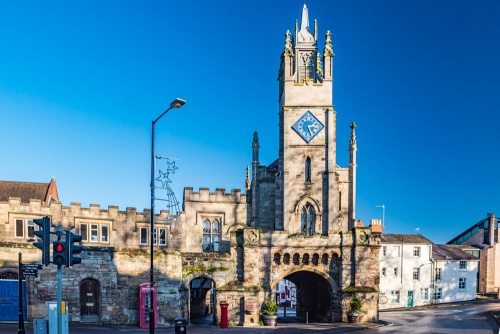 East Gate is a Warwick landmark; a 14th-century gateway topped by a 15th-century chapel standing at the junction of four major roads. It was built to allow access through the medieval town walls of Warwick. The gate consists of a twin-arched gateway topped by a chapel dedicated to St Peter, and adjoins a section of surviving medieval wall.

East Gate stands at the meeting place of Smith Street, Castle Hill, The Butts, and Jury Street. It has a large central arch for vehicles and a smaller arch for pedestrians. Adjoining the gateway is a 13m section of the town walls, standing up to 3.2m high and roughly 1.5m thick. 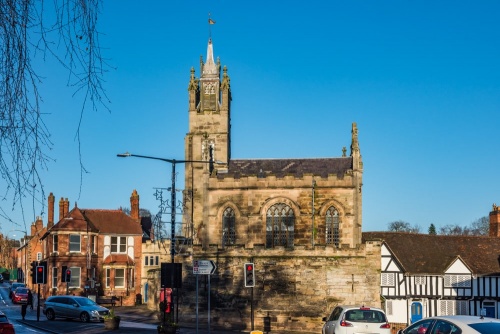 East Gate is one of two remaining medieval town gates in Warwick, the other being West Gate. There were originally three gates, but the North Gate was pulled down in the early Tudor period.

The gateway was probably built in the 14th century, and around 1426 the chapel was added over the arch. The chapel was under the care of the Guild of Warwick.

By 1576 the chapel was falling into decay. The Corporation of Warwick acquired it for educational purposes and repaired the decrepit medieval structure. Until 1590 it was occupied by the King's Grammar School, but when the school moved the building was converted for use as living quarters. In 1700 it was re-converted for use as a school. 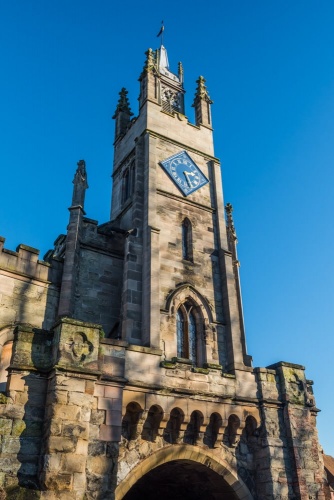 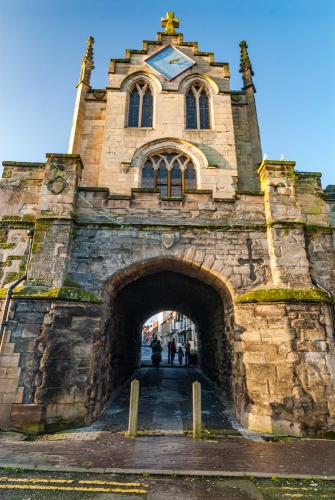 The ground floor was divided into schoolrooms, with the schoolmaster and mistress living on the upper floors. For many years the gateway was used by King's High School for Girls, but in 2009 the school let the lease lapse and the gateway and chapel were converted into a unique holiday cottage.

For that reason, it is not generally open to the public but it is well worth the short stroll from central Warwick to view the exterior and walk through the medieval arch.

The East Gate archway was rebuilt in 1774-76 by Francis Hiorn, a successful architect and three times Mayor of Warwick. It was perhaps Hiorn who added the striking crenellations and pinnacles that make the gateway such an eye-catching structure. Around 1790 the roadway was diverted to the south of the gate. 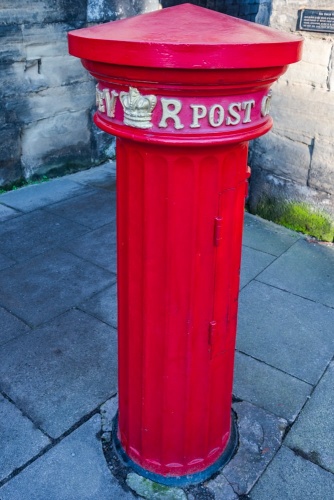 In front of the inner (west) face of the gateway is a 19th-century Grade II listed pillar box bearing the royal monogram of Queen Victoria. The pillar box is made of cast iron, with a conical top section, and is painted the traditional red.

A cast-iron memorial plaque is set into the gateway wall. It reads:

The Pillar Box
Cast in 1856 in the shape of a Doric column at the Eagle Foundry of Messers Smith and Hawkes, Broad Street, Birmingham, is one of a pair installed at the east and west gates of Warwick.

Built onto the gateway near the pillar box is a water fountain with a pink granite bowl given in 1859 by Richard Greaves. 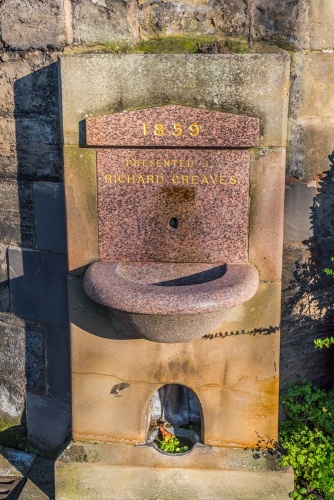 East Gate is at the eastern end of Jury Street, a very short walk from Warwick Castle to the south and the tourist information centre to the west. It is well worth exploring Smith Street, to the east, where many of the shop buildings have retained their original frontages.