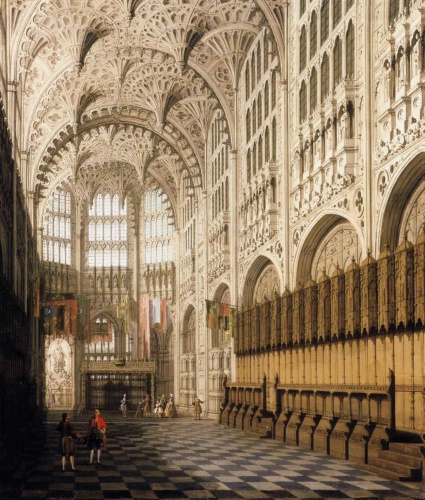 In this series of articles, we're taking a look at the most famous necropolis (burial place) in Britain - Westminster Abbey. The Abbey has such a long history that we've broken things up a bit into edible chunks - history is easier to digest that way. The first part dealt with the origins of the Abbey, part 2 looked at the Abbey from the Middle Ages to the present day. In this final article, we'll go on a virtual tour of the abbey. Click here to open a separate browser window with a floor plan of the abbey you can follow while reading the article.

Standing inside the West entrance to the abbey you can look down the nave over a golden Gothic Revival choir screen (1834). Notice the chandeliers in the nave. They were donated by the Guinness family (of beer fame) in 1965 to mark the abbey's 900th anniversary.

Beside you is a portrait of Richard II, painted in 1390, and the oldest contemporary portrait of a British monarch in existence.

From this viewpoint, you can see the proliferation of funeral monuments that choke the abbey's interior. After the monastery at Westminster was closed by Henry VIII in 1540 the abbey was in dire need of funds, so they made the building available as a burial place - for a price!

The well-to-do could buy the right to be buried in the abbey, a practice which continued until the mid-19th century. So the memorials you see before you do not necessarily denote the final resting place of a British subject of great renown - they are just as likely to showcase the vanity of a rich merchant or lord! 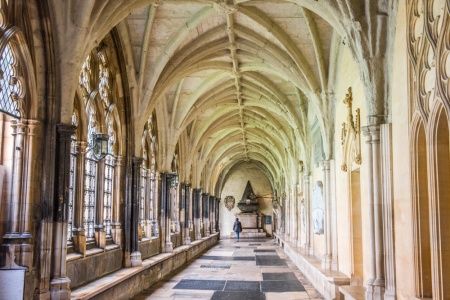 Among the monuments in the nave are those of Winston Churchill and the Tomb of the Unknown Warrior, from WW1. Take a close look at this memorial. The unidentified soldier who lies beneath it is buried in imported French soil, and covered by Belgian marble, as a tribute to the British alliance with those countries during the war. This burial marks the last full-body interment in the abbey.

In the screen itself is the tomb of Sir Isaac Newton. Also within the screen, originally there to divide the monks from the lay worshippers in the nave, is the 13th-century pulpit. In the choir stalls there is a special seat reserved for the reigning monarch.

The cloister spans the reigns of Henry III to Edward III and is thus a glorious mix of architectural styles. The south walk provides good views of the amazingly complex system of Gothic buttresses which support the abbey walls.

From the cloister, you can enter the octagonal Chapter House, one of the earliest parts of the abbey built under the energetic support of Henry III. Technically Westminster should not have a chapter house at all; it is not a regular cathedral, being basically the private church of the ruling monarch, and thus has no canons of the diocese to administer it. But because of that very status as a royal church, it needed an imposing meeting place.

The Chapter House was modelled after Beverley and Lincoln but far outshines those houses. There is a central pier of black Purbeck marble which soars upwards to form an umbrella shape high above. The mood is enhanced by the surviving medieval tiles, wall paintings, and by the sensitive Victorian restoration work of Sir Gilbert Scott.

Of the transepts, the more interesting is the south, where the original rose window remains, and there is excellent medieval sculpture on the end wall. On the east side here is Poet's Corner, named for the proliferation of monuments to literary giants. The earliest memorial is to Geoffrey Chaucer (erected centuries after his death, in 1556). Here also lies Ben Jonson (1574-1637). The friends of Jonson cut costs by burying the Poet Laureate standing upright, thus taking up less costly floor space.

The crossing (where the transepts meet the line of the nave and chancel) is where coronations take place. The sanctuary boasts magnificent floor tiles, which carry on into the Confessor's Chapel.

This part of the abbey is the place of royal memorials. Among the most interesting, at least from an artistic point of view, are the bronze effigies of Henry III and Eleanor of Castile. The piece de resistance is now upon you. For at the end of the apse is Henry VII's amazing chapel. The first Tudor intended the chapel as a fitting place to bury Henry VI (and thus cement his own dubious claims to the throne), but pride of place now goes to the tombs of Henry VII himself and his mother, Margaret Beaufort. 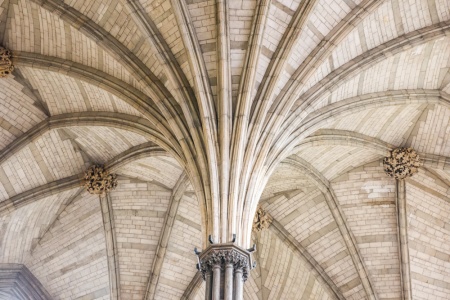 Henry VII's tomb is the work of the Italian Torrigiano, whose other claim to fame lies in the fact that when he was an art pupil he gave a fellow pupil by the name of Michelangelo a bloody nose. Nearby is the joint tomb of sisters Elizabeth I and Mary I. They are buried together, though only Elizabeth's effigy graces the memorial.

Look up. Over your head soars the most remarkably ornate sight in the Abbey. The vaulting of Henry VII's chapel is unique. It is, perhaps, the final flowering of medieval Gothic. So ornate had the style become that there was little other expression left for the architect. You wonder how the extravagant pendant vaults could ever support the roof.

They don't. They are indeed ornamental. The actual supporting ribs are hidden above in the thickness of the ceiling.

Close by is Innocents Corner, so named for the touching monument to the two young daughters of James I buried there, and the urn bearing the supposed remains of the murdered Princes in the Tower.

There is much more to see in the abbey - enough to fill a book. Please remember that despite its status as a tourist attraction, Westminster Abbey is a church, and as such parts may be closed for services or for official functions.