In this series of articles, we're taking a look at the most famous necropolis (burial place) in Britain - Westminster Abbey. The Abbey has such a long history that we've broken things up a bit into edible chunks - history is easier to digest that way. The first part dealt with the origins of the Abbey, now we'll take a look at the Abbey in the Middle Ages. To open a separate browser window with a floor plan of the abbey, click here. 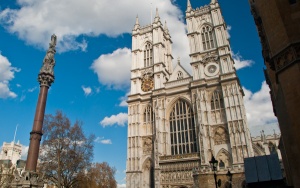 The first great contributor to the abbey in the Middle Ages was Henry III (1216-1272). The abbey we see today is largely Henry's work, though at the time few of his subjects appreciated his efforts; Henry diverted huge amounts of money meant for running the kingdom into his building plans at Westminster.

In 1245 Henry began rebuilding the entire church in the new Gothic style, intending it as a shrine to the memory of Edward the Confessor, whom Henry idolized. Henry's master builder in this new French style was a man named Henry de Reyns, who, despite his Gallic name, was most likely English.

Under the direction of Master Henry, the rebuilding of the eastern end of the abbey sped along, taking just 14 years to complete. By the time Henry III died in 1272 the choir and 5 bays of the 103-foot high nave were finished, but there the work halted for a full century. It took until 1532 before the abbey, apart from the West Towers, was finished.

The West Towers were eventually designed by another master architect, this one considerably better known to us; Sir Christopher Wren, builder of St. Paul's Cathedral. The towers were finished in 1745, well after Wren's death. In the meantime one of the prime jewels of English architecture had been added; the divine Lady Chapel of Henry VII.

The Lady Chapel is worth an article all to itself, but for now let's just say that it is an amazingly elaborate exercise in fan vaulting, with delicate vaults like a network of lace leading your eye aloft. It is almost too pretty, and in a sense, it marked the end of the medieval style of building. When you have elaborated to this extent, where else is there to go but to evolve new styles entirely (rhetorical question)?

Ah, but the monks of Westminster had little time to enjoy their finally completed church. When Henry VIII began his Dissolution of the Monasteries the rich prize of Westminster was one of the first to catch his eye. The Abbey was taken over by the crown in 1534 and closed in 1540. The church then was briefly a cathedral.

It was during this time of turmoil that Westminster played its part in the creation of the expression 'robbing Peter to pay Paul' when money meant for the abbey (dedicated to St Peter) was diverted to the coffers of St Paul's Cathedral.

There you have an all-too-brief run-through of the origins and history of the Abbey at Westminster.