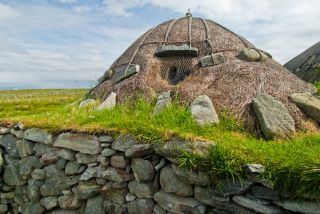 Number 42 Arnol is a traditional thatched crofting house of a style once ubiquitous throughout Lewis. The cottage, built around 1880, has been restored, along with its internal byre, barn, and stackyard, to present a glimpse into the bygone world of traditional Hebridean life.
Until about 1900 almost all cottages on Lewis would have been constructed with double drystone walls and roofed with thatch and turf. More significantly, the dwelling area was connected internally with a byre for livestock. You might think that the proximity of the animals might be unsanitary, but there were hidden benefits; the closeness of the animals actually helped heat the cottage throughout the long winter months. And the peat smoke helped kill bacteria, as well as turning the thatch into rich fertiliser for crops.

The house at number 42 Arnol was inhabited until 1966, and it has been preserved to represent how island people lived for centuries. There is a peat fire on a central hearth, with smoke rising up through a hole in the thatch above. The blackhouse consists of a living area, bedroom, byre, and barn.

The traditional atmosphere at Arnol is more than skin deep. Breathe deeply and you will smell the unmistakable odour of a peat fire. Just like a 'real' crofting cottage, the peat fire at Arnol Blackhouse is never allowed to go out.

Across the road from the blackhouse is a good example of a 'white house', the type of cottage that replaced the traditional blackhouse throughout Lewis in the early 20th century. Why the change? Well, in the 20th century new housing regulations decreed that the main living area had to be separated from the byre, ostensibly for health reasons. So the byre had to be walled off from the family living quarters, and the walls sealed, with no passage from dwelling to byre. On the surface, the white house differs little from the earlier form of dwelling, but it is made with a single, rather than a double wall, cemented with lime mortar. The white house has several features that characterise modern houses, such as pitched roofs, solid walls, chimneys, and windows that open.

About Arnol Black House
Address: Arnol, Isle of Lewis, Lewis, Western Isles, Scotland, HS2 9DB
Attraction Type: Museum
Location: On the A858 between Shawbost and Barvas, on the west coast of Lewis

Nearby accommodation is calculated 'as the crow flies' from Arnol Black House. 'Nearest' may involve a long drive up and down glens or, if you are near the coast, may include a ferry ride! Please check the property map to make sure the location is right for you.