HERITAGE HIGHLIGHTS:   The only working traditional mill in the Western Isles 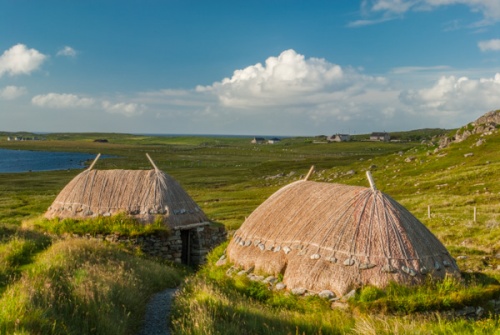 On the western coast of the Isle of Lewis, just west of Shawbost, stand a pair of thatched mill buildings set between Loch Roinavat and Loch na Muilne.

There were a mill and kiln here during the Iron Age, used for drying and grinding barley into meal, and the mill was powered by a stream flowing out of Loch Roinavat.

The two buildings are on an oval plan, with thatched roofs weighed down with large stones. The mill mechanism is fascinating; there are no geared wheels here, as you might see in a more modern water-driven mill. Instead, the millwheel, in a lower chamber, connects via an upright driveshaft to a fixed millstone above it.

Corn and barley were staple crops on Lewis, and there were similar mills scattered throughout the islands. By the 1840s there were hundreds of similar mills in operation, but they gradually fell out of use. The Shawbost mill is now the only working example of this traditional type of mill anywhere in the Western Isles.

The mill buildings are reached by a short path - about 500 yards - past the east end of Loch Roinavat. It is a little difficult to make out the details of the mill mechanism as there are no windows in the thatched roofs; just an open doorway to admit light. As a result, the interior can be very dim on a dull day.

The process of rebuilding the two thatched buildings was begun by local schoolchildren, and completed by The Norse Mill Society. The result offers a glimpse in the Scandinavian history of life on Lewis. The location is picturesque, and the traditional thatched buildings really offer an appealing glimpse into a way of life that was essentially unchanged on Lewis for hundreds of years.

This is an open site - at least it was when we visited! 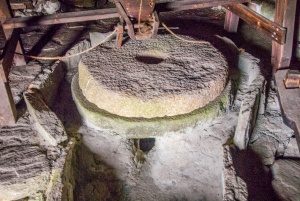 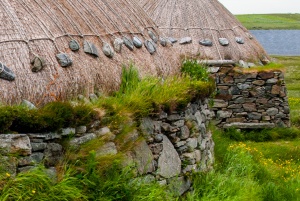 Detail of the thatch construction 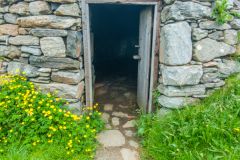 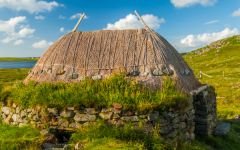 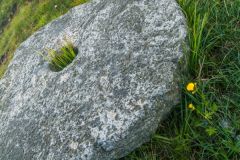 About Shawbost Norse Mill
Address: A858, Shawbost, Western Isles, Scotland, HS2 9BJ
Attraction Type: Museum
Location: There is a parking area on the north side of the A858 just west of Shawbost, five miles north-west of Carloway. The buildings were open when we visited.
Location map
OS: NB244463
Photo Credit: David Ross and Britain Express

Nearby accommodation is calculated 'as the crow flies' from Shawbost Norse Mill and Kiln. 'Nearest' may involve a long drive up and down glens or, if you are near the coast, may include a ferry ride! Please check the property map to make sure the location is right for you.