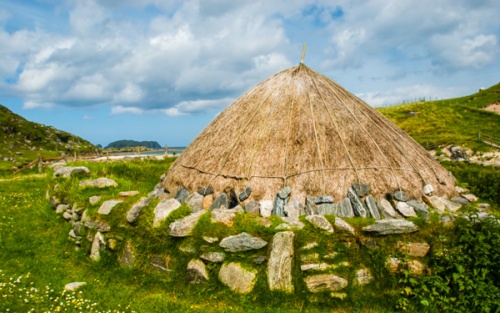 In 1993 a storm uncovered something intriguing at the northwestern tip of Great Bernera island, in Scotland's Western Isles. Great Bernera is a small island, linked to the Isle of Lewis by a road bridge, and the settlement of Bostadh lies at the northern tip of the island. There is a small beach, a semi-circle of clean white sand surrounded by jagged rock.

The storm laid bare a section of the dunes that encroached on the coast and exposed evidence of stone buildings buried beneath the sand. Archaeologists excavated the site in 1996. Just under the surface they discovered a Norse settlement, but it was what lay buried still deeper, under the Norse buildings, that was really exciting. 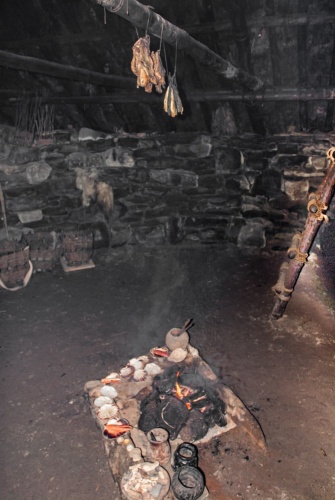 A peat fire on the hearth

The Norse buildings had been erected on top of eight Pictish, or Iron Age houses. These houses were in a distinctive figure of eight shape, with a large circular structure linked to a smaller circular projection by an internal doorway. This type of hut is sometimes called a 'jelly-bean' house due to its shape. The large area was the main living area, while the small end of the 'jelly bean' was probably used for storage.

Each hut was connected to its neighbours by tunnels. In many ways, the discovery at Bostadh is very similar to the famous stone village at Skara Brae on Orkney, although the latter was built several thousand years earlier.

What was truly remarkable about the Bostadh village is that the hut contents had been perfectly preserved by the sand, up to the top of the walls. The houses are thought to date to 500-700 AD (probably closer to the latter end of that time frame). 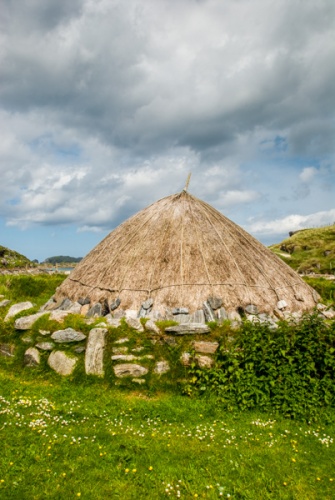 The hut exterior, looking towards the beach

When the huts were excavated an array of interesting finds came to light. There were bones of deer, sheep, cattle, and pigs, plus vast amounts of shellfish and fish. The presence of red deer bones suggests that there was a large area of forest in the region, something that may be hard to imagine when you visit the largely treeless Isles today. Aside from meat and seafood, deposits of grain suggest that inhabitants ate a varied diet.

Other finds help us piece together what type of life these people led. Several pieces of bone combs were found, held together with iron rivets.

The houses were created by digging down below ground level to create an earthen foundation, then strengthening the hut perimeter with a dual layer of drystone walling. The space between the stone 'skins' was then filled with rubble, clay, turf, and sand, rather like a modern cavity wall insulation process.

After a full archaeological investigation had been carried out, the huts were covered over with sand once more, to preserve the structures. Finds from the huts were then put on display in the small museum in Breaclete, the main settlement on Great Bernera. 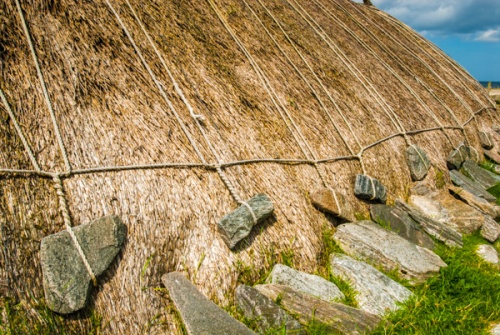 In 1998 a replica hut was built, slightly inland from the actual village location. This hut is as close to a perfect reconstruction of an original dwelling as we can get. Unfortunately, the archaeological investigation of the huts could not tell us how the houses were roofed, or with what material.

So the replica hut is made with a thatched roof, in a style known to have been used throughout the Western Isles, such as at the Arnol Blackhouse and Garenin Iron Age village on Lewis. It seemed unlikely that each of the circular parts of the figure eight would have a separate roof, so the replica is made with a single roof covering both parts of the structure.

Since our visit, the replica hut has been re-roofed in turf, rather than thatch. This replicates archaeologists best guess as to the original style of construction.

The floor is set well below the ground level, reinforced with drystone walls, and a timber frame built to support the roof. The roof covering is held down by heavy stones tied to the end of ropes, in a way that can still be seen at traditional thatched crofting cottages throughout the western Isles. There is a small central hearth, and smoke escapes straight up through a small hole at the top of the roof. 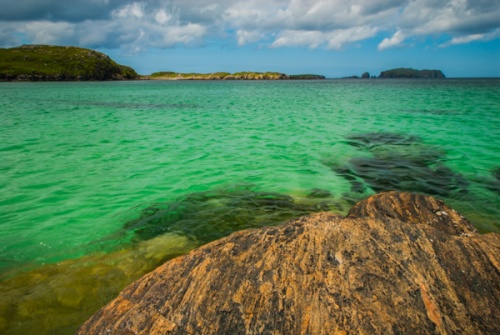 The village site is accessible at any time, and there is a small parking area and an interpretive panel to explain the site. It is interesting, but in truth, there is little to see beyond an expanse of sand and the glorious Western Isles scenery.

A path leads over the dunes to the southern end of the bay, across a footbridge, to the replica hut. You can view the hut exterior at any time, but it is actually open to visitors several days a week in the summer months only, and there is a small charge.

When I visited there was a solitary guide 'holding the fort' inside the hut, warmed by a pungent peat fire burning at the small central hearth. She was very helpful and seemed genuinely interested in the history of the site, and explained how people would have lived here.

The interior of the hut had everyday items scattered about, including cooking pots, a rope-making kit, baskets, meat-drying frame, and various kinds of clay pots. At one end was a raised platform, probably used as a sleeping area for children.

The hut really is in a fabulously scenic location, and it is fascinating to imagine what life must have been like here over 1300 years ago.

Nearby accommodation is calculated 'as the crow flies' from Bostadh Iron Age House. 'Nearest' may involve a long drive up and down glens or, if you are near the coast, may include a ferry ride! Please check the property map to make sure the location is right for you.