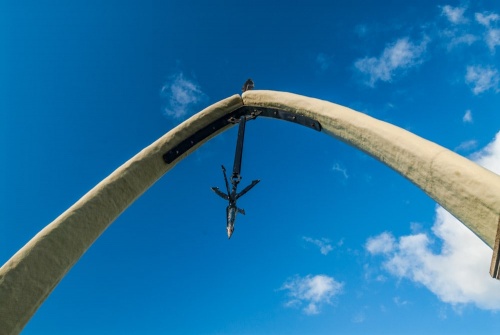 One of the most peculiar tourist attractions in Scotland can be found in the small village of Bragar on the west coast of the beautiful Isle of Lewis. Here, standing over a gate between two cottages, is a huge arch formed by the jawbone of a blue whale. Hanging from the centre of the arch is a metal harpoon.

The story of the Whalebone Arch goes back to September 1920, when the rotting corpse of an 80-foot-long blue whale floated into a nearby inlet named Geodha Nam Muc. Muc-mhara is Gaelic for whale, suggesting that this wasn't the first time a whale had become trapped in this spot.

The whale had a harpoon embedded in its back, with a length of long, thick rope trailing from the harpoon. The harpoon head had an explosive charge which was supposed to have detonated on contact, killing the whale instantly, but for whatever reason, the charge did not fire and the whale escaped, the harpoon embedded in its back, until it eventually lost strength and died. The mystery of who had been hunting the whale remains unsolved to this day. 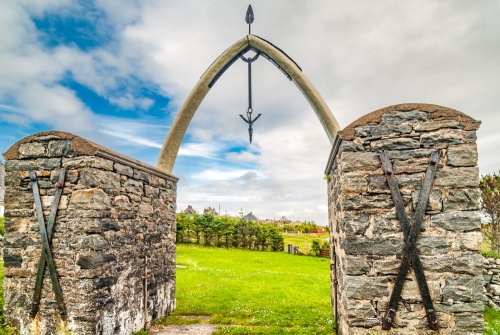 Looking through The Whalebone Arch

A group of local fishermen decided to tow the whale around the headland and into the relative safety of Bragar Bay, where they hauled the gigantic carcass onto the foreshore. The villagers contacted the government but, perhaps unsurprisingly, the authorities took too long deciding what to do, while the whale corpse putrified.

The smell became so bad that the villagers finally pleaded with the authorities to let them dispose of the corpse. Permission was finally granted and entrepreneurial villagers tried to preserve the fleshy bits of the corpse by hauling it to the nearby freshwater loch of Loch an Duine. A potential buyer came from the mainland to inspect the carcass, but by that time it had become too badly rotted.

The villagers saved all the blubber oil that they could. Accounts tell of local residents sticking a knife into the blubber and holding a bottle under the incision until it became filled with oil. 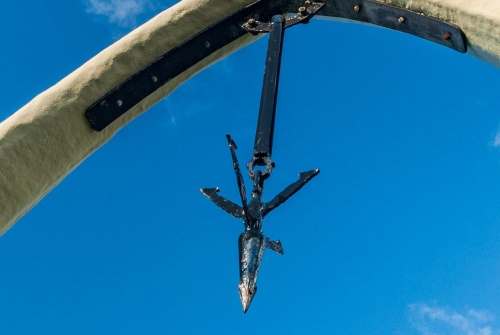 Throughout the process of dealing with government authorities the village postmaster, Murdo Morrison, had acted as a spokesman for the residents. Now Morrison was determined to salvage a memento for himself. The had the lower mandible (the jawbone) cut away and hauled to his cottage at Lakeside in Bragar. It took a team of strong horses and two men to transport the jawbone, tied to a sledge.

The jawbones had to be joined together with iron studs to strengthen the arch. An ironworker from Stornoway crafted an iron droplet from which the harpoon could be suspended over the centre of the archway.

The harpoon was brought into Morrison's garage to be cleaned and painted, when it suddenly exploded, blowing a hole in the side of the building. Thankfully, no one was hurt in the explosion. 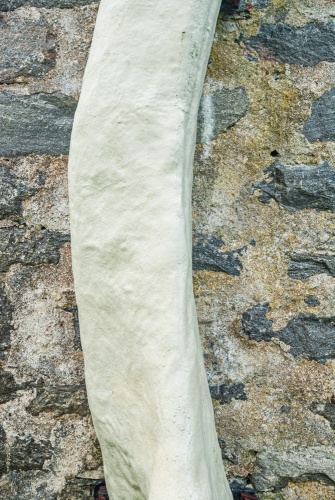 Morrison erected two stone pillars to support the whalebone arch and had wrought-iron gates made for the passage beneath.

Lord Leverhulme, who owned the Lewis estate at the time of the whale's discovery, offered to buy the Whalebone Arch, but Morrison refused to sell.

After a century of weathering, the whalebones are dry and brittle. They have also suffered from souvenir-hunters chipping off bits to take away. 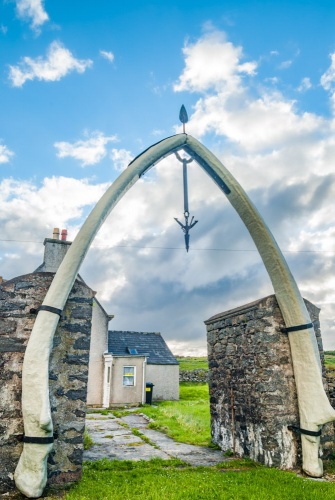 Another view through the arch

Where did the whale come from?

This remains a mystery. According to local residents, the harpoon had what appeared to be Oriental markings, though these have long since weathered away.. It seems possible that the wounded whale made its way from the Antarctic whaling grounds, an extraordinary journey with a harpoon embedded in its flesh.

The Whalebone Arch is to the left of the A858 as you pass through Bragar from the south (i.e. from Carloway). It is set back from the road at an angle, but it is so tall that it is easy to spot. There is a large lay-by on the opposite side of the road. Go through a wooden gate marked 'Whalebone Arch'.

Note: Many of the details in the above account were based on a history of the events by Mary Macauley, the eldest daughter of Murdo Morrison, the Bragar postmaster who created the Whalebone Arch.

Nearby accommodation is calculated 'as the crow flies' from The Whalebone Arch. 'Nearest' may involve a long drive up and down glens or, if you are near the coast, may include a ferry ride! Please check the property map to make sure the location is right for you.