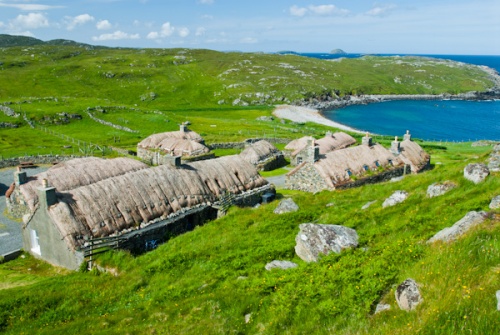 Garenin (or Gearrannan as it is spelled in Gaelic) is a coastal crofting village on the west coast of the Isle of Lewis, north of Carloway. The area has been settled since ancient times, but the village at Gearrannan dates to the 17th century. Gearrannan inhabitants lived in a type of thatched cottage known as a 'blackhouse', built of stone and turf, with walls of double thickness.

The traditional cottages at Gearrannan are a vestige of an earlier age, a reminder of Hebridean heritage that is almost lost. Nine cottages have been preserved, and turned into a combination of a heritage museum and traditional accommodation, using traditional building methods and tools.

The blackhouses were inhabited until 1974 when the last inhabitants moved into modern housing. For a time the cottages stood empty and began to fall into decay. But a local group stepped in to restore the blackhouses and preserve the heritage of a way of life that was in danger of disappearing forever.

You might be forgiven for thinking that the cottages at Gearrannan are medieval - indeed, they look as if they could be - but in fact, they date to the late 19th century. Within several cottages are examples of the sort of activities the inhabitants would have turned their hand to, including weaving looms.

As you might expect, the interiors are simply furnished, especially by modern standards, but they give a wonderful glimpse into a way of island life that must have changed very little over centuries of settlement here. 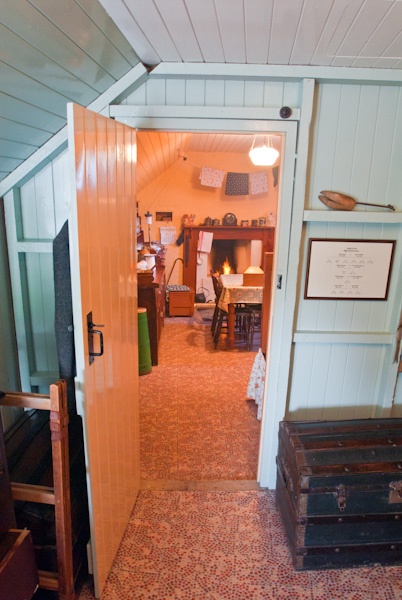 An inner passage in a blackhouse

There is a useful museum on site, and a cafe and shop. There are frequent demonstrations of traditional skills, including weaving, butter making, spinning, baking, and other crofting skills.

From Gearrannan there are coastal walks in both directions, and leaflets detailing the routes are available in the onsite shop. As of this writing, Gearrannan is open 6 days a week from April through September. If you fancy a longer stay you can book self-catering or hostel-style accommodation.

The location is truly magnificent, with marvellous coastal views, and the blackhouse cottages are really intriguing. For a different look at traditional Hebridean life, visit the Arnol Black House, also on Lewis.

Nearby accommodation is calculated 'as the crow flies' from Gearrannan Blackhouse Village. 'Nearest' may involve a long drive up and down glens or, if you are near the coast, may include a ferry ride! Please check the property map to make sure the location is right for you.