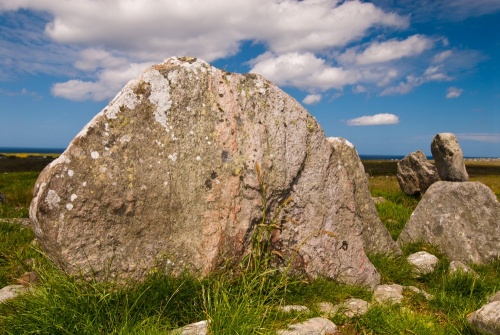 Steinacleit Stone Circle is a small stone circle set upon a low hill overlooking a mere, with a central structure within the circle. The exact nature of the central structure is a bit of a mystery; it has been variously described as a chambered cairn and a prehistoric homestead. Most of the stones have fallen; only five or so remain upright.

One theory is that the 'stone circle' is actually a domestic building created from an earlier prehistoric structure. The RCAHMS national monument record describes it as a homestead and field system and Historic Environment Scotland suggests that it may be the remains of a prehistoric farmstead with an enclosed area, or yard.

If you are expecting a dramatic stone circle like Callanish you will be disappointed, but Steinacleit is an intriguing site, perhaps more interesting because we can only guess at its original purpose.

The Historic Scotland sign tells us 'Neolithic burial cairn (c. 1800-1500 BCE). The circle of large stones, some 50 ft in diameter, formed the kerb which enclosed the cairn. An outer setting of stones, oval on plan and of unknown purpose, runs at varying distances from the cairn'.

It seems that the Steinacleit stones were buried beneath the peat for thousands of years and were only rediscovered in the 1920s when crofters digging for peat uncovered evidence of a circular building and a walled enclosure in a roughly oval shape.

An area of peat was left intact, showing that the stones had been buried up to one metre beneath the ground surface.

So, what was Steinacleit? A stone circle? A homestead? The site has never been excavated, but similar sites have been explored throughout the Western Isles and proven to be homesteads built about 2000 BC that formed part of larger settlements, so that seems to be the most likely answer. 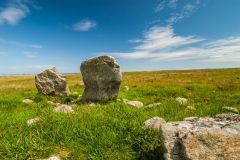 Nearby accommodation is calculated 'as the crow flies' from Steinacleit Stone Circle. 'Nearest' may involve a long drive up and down glens or, if you are near the coast, may include a ferry ride! Please check the property map to make sure the location is right for you.