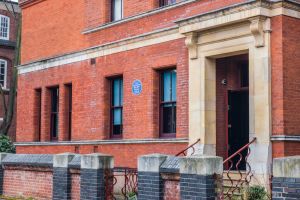 The former studio of Victorian artist Frederic, Lord Leighton, is now a museum dedicated to his life and works. The house, on the edge of Holland Park, is overflowing with artwork by Leighton and his contemporaries Burne-Jones, Watt, and Millais.

Frederick Leighton, 1st Baron Leighton, was born into a well-to-do merchant family in Scarborough in 1830. He studied art in Europe and lived for several years in Italy and France. In 1860 Leighton moved to London, where he met and mixed with the leading lights of the Pre-Raphaelite movement.

His first major commission after moving to Britain was the memorial to Elizabeth-Barrett Browning erected by her husband, poet Robert Browning, in Florence. He was elected to the Royal Academy in 1864 and was named President of the Academy in 1878. Just a year prior, his sculpture of Athlete Wrestling with a Python caused a sensation and is credited with reinvigorating British sculpture and launching the movement known as New Sculpture.

Leighton's rise to the top of the art world was recognised when he was knighted in 1878, and in 1896 he was the very first painter to be given a peerage, making him Baron Leighton of Stretton. The honour came just one day before Leighton's death from a heart condition on 25 January 1896. The baronage died with him, and the 1-day extent of his peerage is a record in Britain. 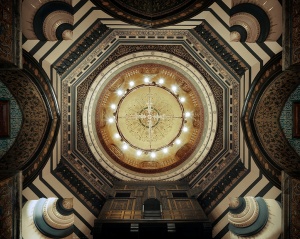 When Leighton died the contents of Leighton House were sold, including over 1000 drawings. Many of these were purchased by the Fine Art Society.

Leighton's London residence in Holland Park was turned into a museum after his death, opening in 1929. The house and museum are now cared for by the Royal Borough of Kensington and Chelsea. The house was designed by architect George Aitchison specifically for Lord Leighton and features an opulent Oriental interior blended with rooms in the Aesthetic style (i.e. designed with artistic beauty in mind).

The house was extended several times during Leighton's lifetime, including the 2-storey addition of the Arab Hall in 1877, made to display a collection of Middle Eastern tiles. The Arab Hall design was based on the Italianate palace of La Zisa in Florence and acts as a setting for tiles as old as the 14th century as well as 16th-century Turkish tiles.

The elegant interior houses period furniture and over 700 of Leighton's drawings, 81 oil paintings, 27 watercolours, 54 prints, as well as sketches, albums, and notebooks. There are also sculptures including the famous Athlete Strangling a Python. In addition to works by Lord Leighton himself, the gallery features Pre-Raphaelite art by such artists as Edward Burne-Jones, George Frederick Watts, and John Everett Millais.

The Islamic-style interiors and court have been used for several films and TV series including Nicholas Nickleby, Terry Gilliam's Brazil, and Spooks.

Leighton House is located in a quiet street of terraced houses just off Kensington High Street. There are no tourist signs (at least we didn't see any on our visit), but the house itself is signposted and impossible to miss, with its bright reddish-orange brick exterior and domed tower.

The subdued exterior does not prepare you for the absolutely stunning interiors. The ground floor in particular, with its Arabic-themed rooms, is exquisite. You feel as if you have been transported into an Oriental palace, with richly coloured tiles and exotic detailed carvings.

The first floor is marginally more sedate, but again Lord Leighton's fascination with the Arabic world shines through. It really is impossible to overstate just how impressive the interiors are. There are numerous examples of Leighton's paintings on the walls, but also works by other artists. I was particularly struck by several of Millais' paintings.

I highly recommend combining a visit to the Leighton House Museum with a trip to 18 Stafford Terrace (Linley Sambourne House) which is just a few blocks east of the museum and is also run by the borough council.

Unfortunately we were not allowed to take our own photos inside the museum. All interior photos here are (c) Leighton House Museum. 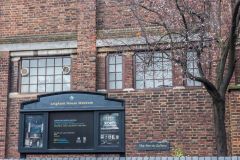 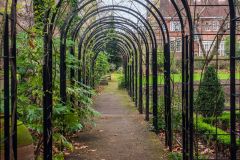 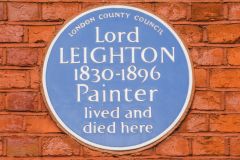