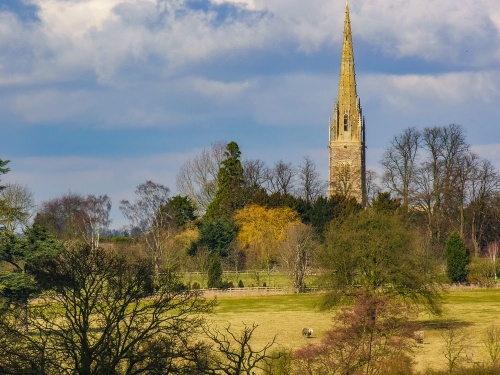 'Bloxham for height, Middleton Cheney for might, and King's Sutton for beauty'. So says an old rhyme highlighting the attractions of three neighbouring historic churches in the Cherwell Valley, on the border of Oxfordshire and Northamptonshire.

The rhyme is right; the church of St Peter and St Paul, King's Sutton, is a staggeringly beautiful building, visible for miles due to its slender spire, one of the tallest in the UK at 60m (198 feet). The spire was erected around 1370 and is said to be the work of Edward III's own architect. 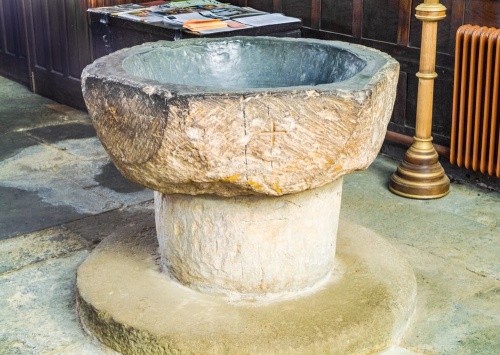 The church itself dates to at least the Norman era, and it retains some 12th-century stonework. The medieval building was heavily restored in 1866 by the famous Victorian architect Sir George Gilbert Scott. It is made of limestone rubble under a roof of stone slate.

The church consists of an aisled nave and clerestory, a chancel with a vestry and organ chamber, and a west tower with a slender octagonal spire. A corbel table of carved 12th-century heads runs around the north and south chancel walls. 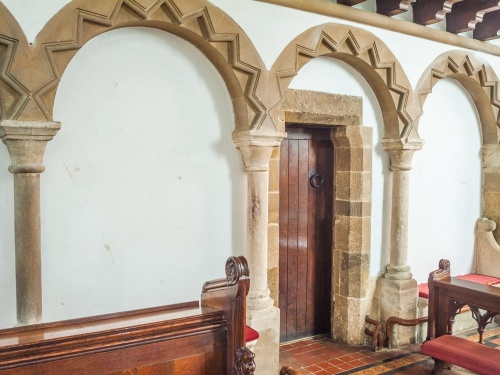 12th-century arcading in the chancel

The interior features very well-preserved Norman blind arcading in the chancel. The sedilia and piscina in the south chancel wall are 19th-century features, though the piscina incorporates 12th-century mouldings. The chancel arch dates to the 14th century but the responds are part of the 1866 restoration.

The south arcade in the nave is Norman, while the north arcade is from the 14th century. The nave's timber roof dates to the late medieval period, sometime around 1500, and features carved and gilded bosses, while the aisle roofs are from the same period. The north aisle roof has bosses in the shape of heraldic shields. 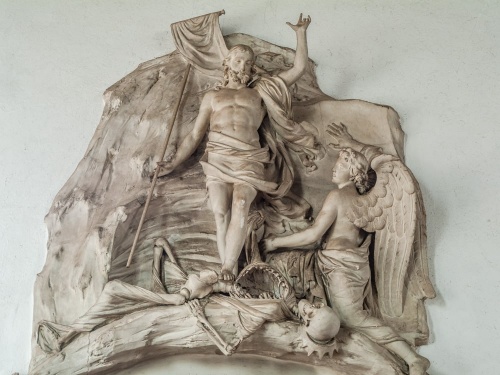 Plaster relief carving of The Resurrection

The font is a very roughly carved bowl and stem, probably dating to the 12th century. In the north aisle is a carved wooden panel crafted around 1500, depicting three pairs of figures. Also on the wall is a plaster relief carving of The Resurrection with the figure of Christ trampling a skeleton underfoot, watched by an angel, while in the chancel is a wall monument in memory of Thomas Freke, who died in 1769.

The pews date to 1842 and feature finely carved bench ends. The beautiful wooden screen was installed by Gilbert Scott in 1866. At the rear of the church is the mechanism of a 17th-century turret clock, restored in 1968. 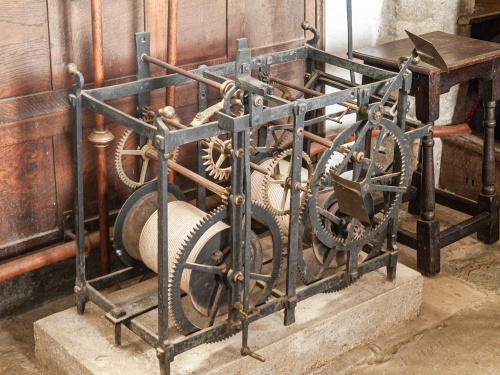 The church follows the Anglo-Catholic tradition and has colourful Stations of the Cross around the interior walls.

The church was in the news in 2019 when parishioners polarised over the question of whether to allow a woman priest to serve the parish. The temporary vicar's wife decided to boycott services after the parochial parish council voted against inviting a female vicar to apply for the post.

King's Sutton's parish church is a delight; a mix of medieval and Victorian features set in a lovely historic building. The church is usually open daylight hours and was open both times we visited. 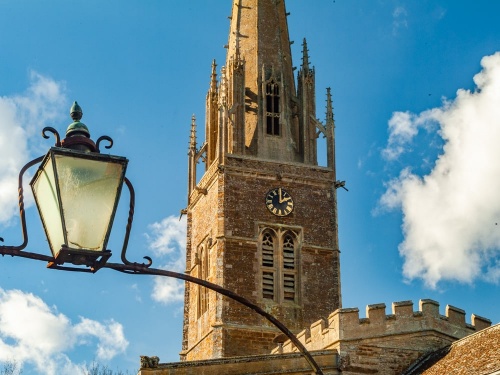 The striking tower and spire

St Peter and St Paul's Church stands on the north side of The Square, on the western edge of the village. It can be reached from either Junction 10 or Junction 11 of the M40.

More self catering near King's Sutton