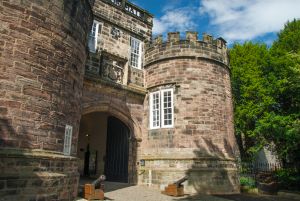 Skipton Castle
A market town to the south-east of the Yorkshire Dales National Park, Skipton dates back at least to the time of the Domesday Book of 1086. Sometimes called Skipton-in-Craven, the town is home to High Corn Mill, built in 1310 and one of the oldest surviving mills in England.

High Corn Mill stands beside the Eller Beck, and is now restored as a unique shopping area. Records show that in 1310 it was owned by Robert de Clifford, 1st Baron de Clifford, and the Clifford connection with Skipton was to last more than 4 centuries.

By the time the mill was built, Skipton Caste was already 220 years old. The caste was begun in 1090 by Robert de Romille. That early Norman fortress was built of timber and earth, but in the 12th century, it was rebuilt in stone by William le Gros.

The medieval castle was comprehensively rebuilt by Lady Anne Clifford in the middle of the 17th century. Lady Anne was responsible for the castle's striking cobbled courtyard, with a 350-year-old tree as the centrepiece.

Skipton Castle is one of the best-preserved medieval castles in the country, and well worth a visit. 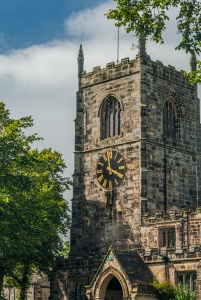 The town grew up around the castle, and became a thriving market centre during the Middle Ages, with a prosperous wool market. The name reflects the town's connection to wool, for it translates loosely as 'sheep town'. The reliance on wool waned in the 16th and 17th centuries, but in the 19th century, Skipton became known as a centre for milling, linked by canal to major industrial cities like Leeds.

Near the castle is Holy Trinity church. The first church on this spot was built in the early 12th century, but around 1300 it was rebuilt and enlarged. From the 1650s it was rebuilt again, by Lady Anne Clifford who owned the castle.

The tomb of Lady Anne's father is one of the highlights inside Holy Trinity, along with an early 16th century carved screen and a medieval font with a Jacobean cover. A more modern attraction is a richly coloured stained glass window by the Victorian designer CE Kempe.

The historic Leeds Liverpool canal, the longest inland waterway in England, runs through the centre of Skipton, and there are pleasant walks along the banks. A new Millennium Walk town trail links many of Skipton's most interesting visitor attractions.

In the town hall is the Craven Museum and Gallery, with exhibits on local history, geology, archaeology, art, and fashion. The most popular exhibit is a rare first folio of works by Shakespeare. Only 230 First Folio's are known to exist in the world, but only 4, including this one, are on permanent display. This edition was published in 1623, seven years after the Bard of Avon's death.

Just outside Skipton is Embsay, home to the Embsay and Bolton Abbey Steam Railway, a heritage rail line that carries visitors on steam-driven journeys through attractive countryside, ending near historic Bolton Abbey.

A 2014 poll by the Daily Mail newspaper named Skipton the best place to live in Britain, in part for its vibrant shopping and cultural life, but also for its proximity to the Yorkshire Dales.

More self catering near Skipton >>

More bed and breakfasts near Skipton >>