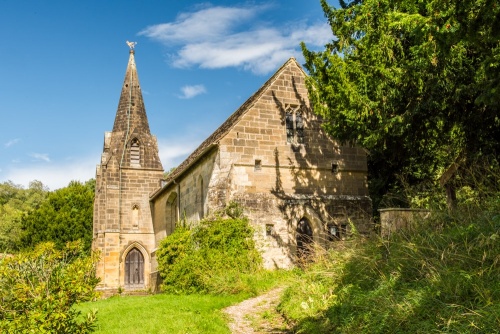 On a hill overlooking the ruins of Rievaulx Abbey in the heart of Ryedale stands the small parish church of St Mary, which began in the 13th century as the abbey's slipper chapel (a wayside chapel for pilgrims built into the abbey gates and sometimes called a 'gate chapel'). Visitors removed their boots here and put on slippers, hence the name. Pilgrims came to Rievaulx to visit the shrine of St William, the abbey's first abbot.

After the abbey was suppressed by Henry VIII in 1538 the slipper chapel and a one-acre garth was granted to the Duke of Rutland. In 1641 it passed to the Duke of Buckingham and was purchased by Sir Charles Duncombe in 1694 when he bought the Rievaulx estate. 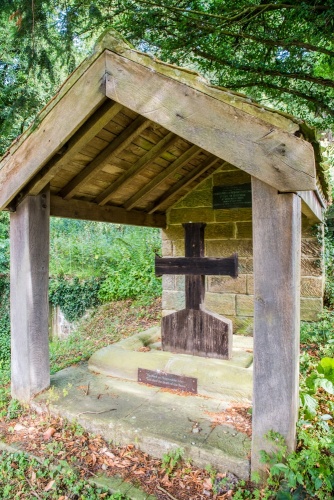 The chapel was rebuilt as the parish church of Rievaulx in 1906-7 by the architect Temple Moore, a pupil of Sir George Gilbert Scott. Moore doubled the size of the original medieval building and added the present chancel, vestry, and tower. The church was dedicated to St Mary, as were all Cistercian monasteries, including Rievaulx Abbey.

The base of the north and south nave walls and most of the west gable survive from that 13th-century chapel.

The stone is similar to that used for the abbey's choir and refectory. It was quarried locally in the late 12th century. On the north side of the external buttress is a medieval stone carved with the letters RIEVALLENS, which was part of the longer inscription MONASTICA RIEVALLENSIS (Rievaulx Abbey) that appeared over the abbey gateway. 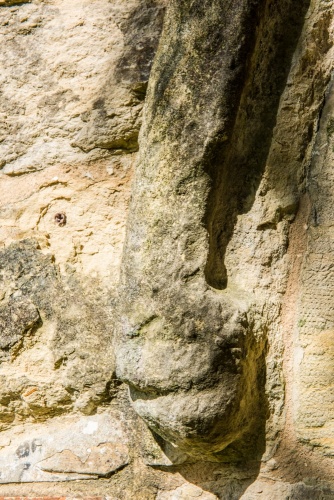 The former east window is now in the north wall. The north and south windows are in Early English style, as is the west doorway.

You can still see an arch that once formed part of the abbey gatehouse near the churchyard gate and across the lane are the base of pillars from the gatehouse.

The Earl of Feversham Memorial

Outside the west door is a memorial marked by a large wooden cross to Charles Duncombe, the 2nd Earl of Feversham. Duncombe was a Colonel of Yeoman Rifles in the 21st King's Royal Rifle Corps. He died on 15 September 1915 at Flers, during the Battle of the Somme.

He was first buried at Flers under a cross made from a nearby farmhouse. His body and the cross were brought home to England by his wife Frances and his son the 3rd Earl Feversham. The very touching epitaph refers to Charles and Frances with the simple phrase, 'They were happy here'. 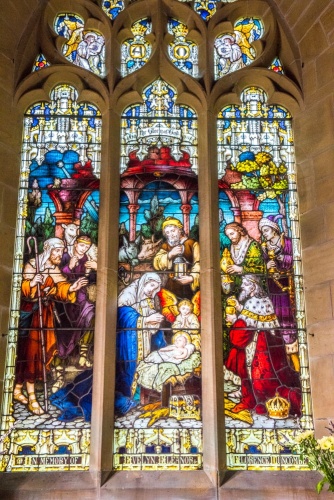 Set into the wall is a single lancet with a stained glass window in memory of Rev Rawdon, who also died in the Great War. The colourful east window was given in memory of Evelyn Eleanor Duncombe of Duncombe Park.

One oddity is an extremely small square window, no more than a square porthole, set into the west wall near the door. This is presumably a feature of the medieval chapel, perhaps intended as a leper window, allowing a view of the high altar from outside the church for those who were not allowed to enter the building.

St Mary's is a very simple country church. Its main interest lies in the fact that is was formerly the slipper chapel for Rievaulx Abbey and incorporates stonework from the abbey gatehouse. It has very good early 20th century windows and a touching memorial to the 2nd Earl of Feversham. 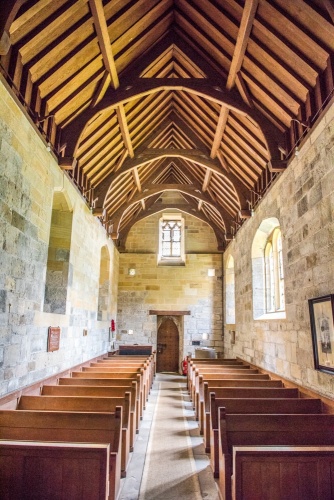 The church is on the lane leading down into the village and the entrance to Rievaulx Abbey. There is no easy place to park along the lane but it is a relatively easy uphill walk of about five minutes from the abbey parking area. The church was open when we visited. 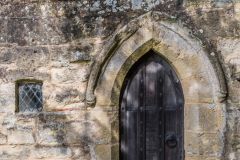 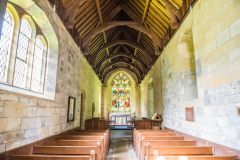 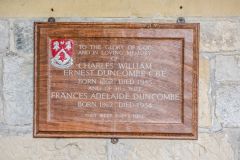 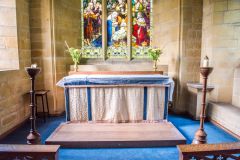 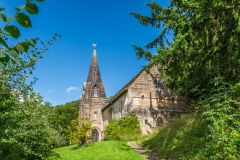