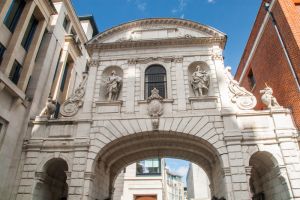 Temple Bar is the last surviving gateway to the City of London. It used to stand across Fleet Street but is now at the entry to Paternoster Square, behind St Paul's Cathedral. The Bar dates to at least 1293, when it gave access to the area now known as 'Temple', the home of legal London.

That early Bar was likely no more than a chain across the road, but around 1400 this was replaced by a timber gatehouse topped by a prison.

Temple Bar is historically important as the point where major processions enter the city. On one such occasion, a procession celebrating the defeat of the Spanish Armada, Queen Elizabeth I was met at Temple Bar by the Lord Mayor of London, who presented her with the keys to the City.

The Queen, in return, gave the Lord Mayor a bejewelled sword. This ceremony has been repeated down through the centuries on important state occasions when the monarch halts at Temple Bar and asks the Lord Mayor for permission to enter the City. The Lord Mayor, in exchange, offers the monarch a Sword of State as a sign of loyalty.

By the time of the Great Fire of London in 1666, the Bar was in a dire state of disrepair. It was badly damaged in the fire, and a new Temple Bar was built. Tradition says that the rebuilt Bar was designed by Sir Christopher Wren, though there is some doubt as to the truth of this. The material for the new Temple Bar was Portland stone, quarried from royal quarries in Dorset.

The new design for the Bar called for niches on either flank of the opening on both sides. These niches were filled with statues of Queen Anne of Denmark and James I on one side and Charles I and II on the other.

A row of iron spikes stood out atop the main arch. These spikes were used to display the heads of traitors throughout the 18th century.

In 1878 the Bar was removed to make room for the new Royal Courts of Justice and to allow easier traffic flow. It was taken down, brick by brick, and eventually re-erected at Theobalds Park in Hertfordshire. Lady Meux of Theobalds Park was known to have entertained luminaries such as Edward VII and Winston Churchill in the chamber above the arch.

Temple Bar was eventually dismantled once more and returned to London, where it was erected at the entrance to Paternoster Square, behind St Paul's Cathedral. 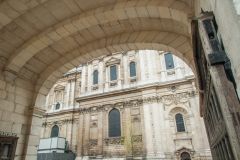 More self catering near Temple Bar >>