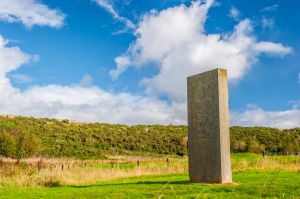 The scanty remains of a small rectangular chapel stand in a field at Hilton of Chadboll, on the Tarbat peninsula near Invergordon. Beside the chapel stands a full-scale replica of the Hilton of Cadboll Pictish cross slab, one of the finest carved Pictish stones in Scotland.

In the 19th century, the upper section of the cross-slab was found near the chapel foundations. The stone was removed to Invergordon Castle, then moved to the British Museum, and finally transferred to the National Museum of Scotland in Edinburgh.

The lower section of the slab was discovered in 2001 during excavations by Historic Scotland and the Glasgow University Archaeological Research Division. This lower section is on display in the village hall at Hilton of Cadboll.

As for the stone, it is extraordinary; one side is carved with a Christian cross, while the other shows traditional Pictish symbols such as a Z-rod, V-rod, double disc, hunting scene, and crescent. What makes the Hilton of Cadboll Stone remarkable in Pictish art is that a likeness of a woman is the central figure on the reverse face of the stone. The carving shows a woman mounted on a horse, with a hunting dog, a pair of trumpeters, and two male attendants.

The chapel site is well signposted from the roads surrounding Hilton of Chadboll. Though the main signs direct you to the road that runs through the village and along the shore, a better way to visit is to park on the minor road from Balintore that runs above the village. There is a signed layby and an information panel, with excellent views over the chapel site.

From the information panel, a path leads down the hill to the chapel. But it is not really the chapel that draws your eye, it is the remarkable replica cross slab. Obviously it is a replica, but the carving closely follows the style of the original, and the effect is stunning. Both faces are carved, but the sides of the slab have been left rough. The cross face is exquisitely detailed, with intricate interlace patterns and figures of serpents and Pictish beasts, as well as a man wrestling with a lion.

By contrast with the replica cross slab, the chapel itself is a bit of a disappointment. It is very hard to make out the outline of the foundations, as the site is well covered with earth. You can go through a gate in the retaining fence and wander about the chapel, but there are no information panels and it is rather difficult to get a sense of what the building looked like.

As noted above, the base of the cross slab is held in the village hall, about 1 mile south-west of the chapel site, along the shore road. Unfortunately, the hall appears to only allow regular access for limited hours during the week. We tried to visit on a Saturday and to our surprise, the hall was locked up tight, so we weren't able to see the base. 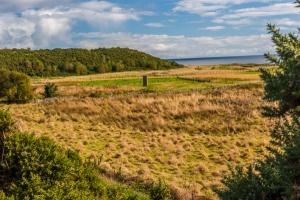 The Chapel site from above 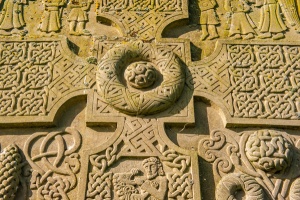 The central boss of the replica cross 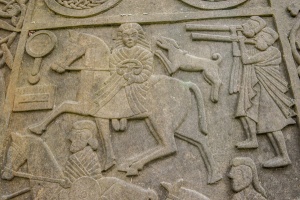 Female figure on the landward face 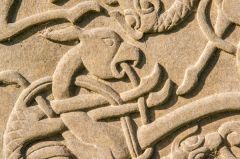 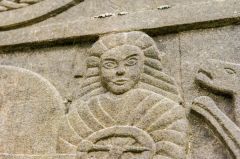 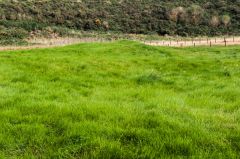 Nearby accommodation is calculated 'as the crow flies' from Hilton of Cadboll Chapel. 'Nearest' may involve a long drive up and down glens or, if you are near the coast, may include a ferry ride! Please check the property map to make sure the location is right for you.

More self catering near Hilton of Cadboll Chapel >>

More bed and breakfasts near Hilton of Cadboll Chapel >>