HERITAGE HIGHLIGHTS:   The church stands on the site of the earliest Pictish monastery in Scotland 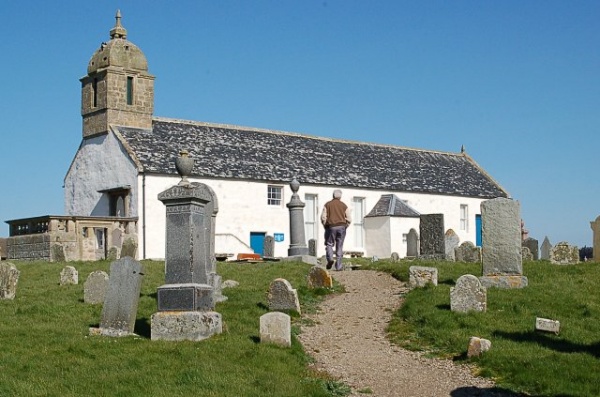 Portmahomack is a small village on the north coast of the Tarbat Peninsula, east of Tain. The area was settled at least as early as 2000 BC, and the Romans may have erected a fort at nearby Port a Chaistell, but its importance during the Pictish period is what has drawn archaeologists to the area.

Around AD 550 the Picts established a monastery at Portmahomack, and the monastic site was occupied until it was destroyed by fire around AD 800. Over 200 pieces of carved stonework were discovered, some showing signs of burning. One possibility is that the monastery was destroyed in a Viking raid. 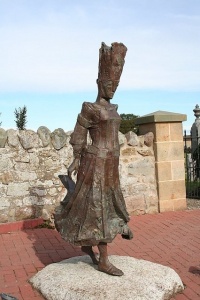 Bronze sculpture of a Pictish
Princess outside the church

Remains from the Pictish period include cist burials and stone crosses. The monastery precinct has also revealed signs of habitation ranging from AD 140 to AD 590, suggesting a small settlement was here before the monastery was founded.

Archaeologists also discovered signs that the Picts made vellum for creating early Christian books, which suggests that the monastery became an important centre of learning. It is the earliest known Pictish monastery and was pivotal in establishing Christianity in what is now Scotland.

Perhaps more importantly, they discovered remains of a stone church. Sometime in the 8th century the remains of the Pictish church were rebuilt as a new stone church dedicated to St Colmoc. We are not exactly sure who Colmoc was; the name may refer to St Columba, or to the Celtic holy man Colman of Lindisfarne.

The east wall of the crypt is the best-preserved part of this 9th-century building. Stone steps lead into the earth, to a barrel-vaulted chamber with small openings in the wall to admit light. Within the wall is a stone cupboard, or aumbry. The crypt as we see it today was rebuilt around 1560. The crypt walls must have been built into an existing Pictish cemetery, for early Pictish memorial stones are embedded in the walls. Among these is a figure of a dragon, now on display in the Treasury.

The church was partly rebuilt in 1756 and features a distinctive stone bell turret.

Death in the Crypt

If you examine the crypt walls you can see signs of a fire. In the 15th-century clan warfare broke out between the Rosses and the Mackays of Sutherland. Angus Mackay led a band of his men on a raid into Ross territory. The Rosses pursued the Mackays, who took refuge in the church crypt. The Rosses set fire to the church and Angus Mackay and several of his men were burned alive.

After lying empty for several years Tarbat Old Church was restored to serve as the Tarbat Discovery Centre, housing a museum of local heritage. The Discovery Centre includes exhibits of finds from archaeological excavations within the church and the surrounding fields, with a large display of Pictish sculpture.

Other stones found at Portmahomack are preserved in the National Museum of Scotland in Edinburgh. The museum tells the story of the monastic settlement and the archaeological investigation of the site.

The Centre also maintains a display on the life of Peter Fraser, former Prime Minister of New Zealand, who grew up in nearby Hill of Fearn.

The church and Discovery Centre is open to visitors from spring through autumn, with extended hours at the height of summer. It is also open to pre-booked groups throughout the year. There is a small admission charge.

Nearby accommodation is calculated 'as the crow flies' from Tarbat Old Parish Church. 'Nearest' may involve a long drive up and down glens or, if you are near the coast, may include a ferry ride! Please check the property map to make sure the location is right for you.