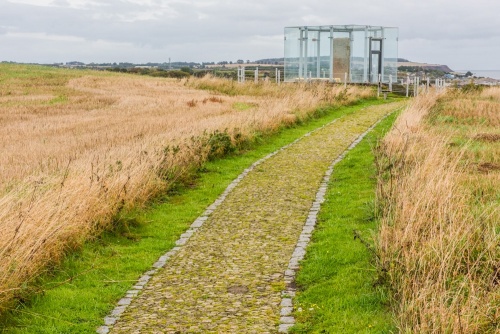 The trail to the Shandwick Stone

The Shandwick Stone (known as Clach a' Charraidh in Gaelic) is a Class II Pictish cross-slab carved around AD 780. The stone was quarried from the cliffs along Shandwick Bay and moved to the summit of a low hill overlooking the Bay. The Stone stands about 9ft (2.7m) high and is 3ft 3 inches (1.0m) wide.

The seaward (east) face of the slab is carved with a Christian cross formed by two rows of bosses with figures of angels hovering over beasts that might be lions. Under the left-hand angel is what appears to be a boar trampling a human figure.

The rest of the east face is covered with intricate interlace patterns incorporating serpents. 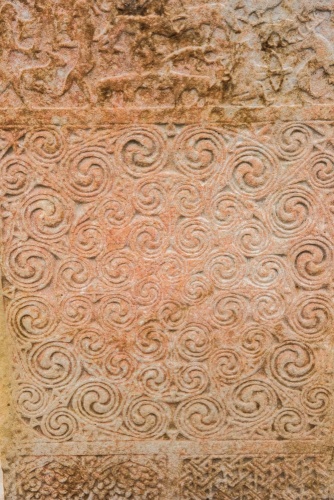 Intricate 'triskele' patterns on the landward side

The carvings have much in common with illuminated manuscripts of the period from the monasteries at Iona and Lindisfarne. The design is also similar to the cross-slab at Hilton of Cadboll, suggesting that there may have been a monastery nearby with skilled masons creating themed cross-slabs. One theory suggests that the carvers from Easter Ross worked on the famous crosses of St John and Oran at Iona.

The landward (west) face of the Shandwick Stone is divided into eight distinct panels, each featuring traditional Pictish symbols and scenes. The largest panel is carved with exquisitely detailed 'triskeles', three-in-one spirals.

The central panel depicts Pictish beasts, birds and human figures while other panels depict symbols like the Pictish double disc and intricate interweave patterns. There is a busy hunting scene with horsemen and another hunter on foot as well as a crouching archer aiming at a stag. In the centre are a pair of bulls facing each other while on the left are two large warriors with shields and swords.

The result is stunning, even though sections of the Stone are missing and others are very worn from weathering. 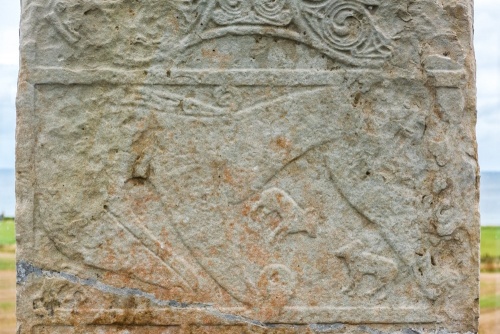 Archaeologists don't know if there is any significance to the fact that the overtly religious face of the stone faces seaward while the secular side faces landward, but it is interesting to wonder if that positioning was intentional or purely coincidental. The sides of the stone are unadorned, which is a bit unusual.

What makes the Shandwick Stone so fascinating is that it shows new meeting old; new in the form of Christian symbols and 'old' in the form of traditional Pictish pagan symbols. It was carved at a time when the Picts were newly converted to Christianity but their pagan art and traditions remained. Both are shown in the beautifully crafted carvings on the Shandwick Stone.

The stone is first documented in 1776. Sometime around 1846 it was blown over and broken into three sections. The base section was presumably left in the ground and has never been found. The top two sections were clamped together and set on a modern base. In 1988 the sections were restored and placed in the large glass enclosure to protect them from weathering. The very tip of the stone is missing, and the remaining top section is badly weathered.

The Shandwick Stone's Gaelic name 'Clach a' Charraidh' translates roughly as 'Stone of the graves'. The field was formerly used as a burial ground but fell into disuse after the 1832 cholera outbreak and was finally ploughed around 1885. 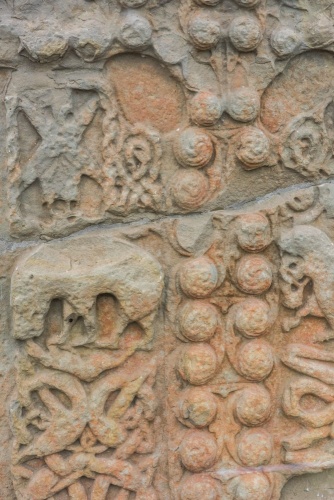 Angels and beasts on the cross face

The Shandwick Stone stands in a modern glass enclosure in a field overlooking Shandwick village. There is a layby on the minor road that runs off New Street at the southern end of the village and links with the road to Ankerville. A cobbled path leads from the road to the Stone. 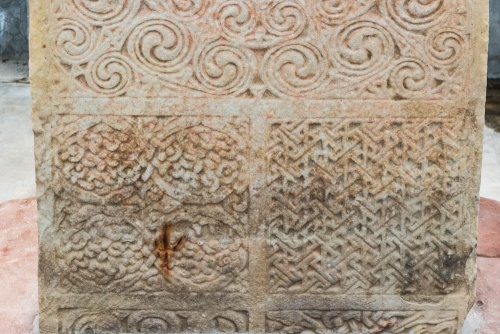 The base of the landward face

Nearby accommodation is calculated 'as the crow flies' from Shandwick Stone. 'Nearest' may involve a long drive up and down glens or, if you are near the coast, may include a ferry ride! Please check the property map to make sure the location is right for you.

More self catering near Shandwick Stone