Chapel of Our Lady of the Crag, Knaresborough 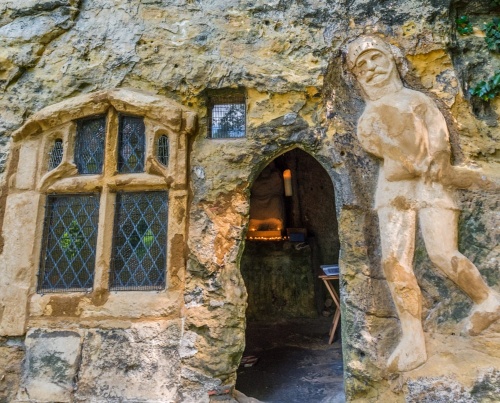 The Chapel of Our Lady of the Crag

The Chapel of Our Lady of the Crag (sometimes known as The Chapel in the Rock) is an early 15th-century chapel carved into the solid limestone of a cliff face a stone's throw from the River Nidd in the historic Yorkshire town of Knaresborough.

We know very little about the chapel's creation, but documents show that John the Mason was granted permission to build a chapel by King Henry IV in 1408. John was probably a master mason working on nearby Knaresborough Castle on behalf of the king and repairing the parish church of St Mary (now rededicated to St John the Baptist). It seems likely that John the Mason worked to quarry stone for rebuilding the castle from a nearby site. 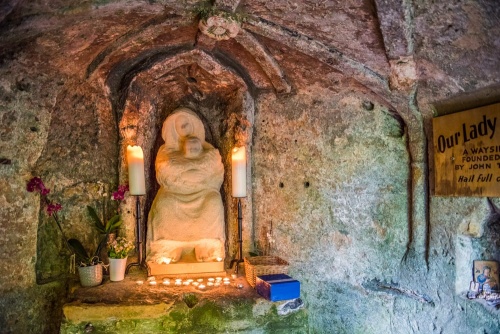 The traditional story of the chapel foundation says that John's son narrowly escaped death in a rockfall at the quarry. The boy was playing while his father worked when a sudden fall of rock began to tumble towards him. John the Mason was too far away to grab the boy in time, so he cried out to the Virgin Mary to save him.

Miraculously, the rockfall changed direction and missed the child, who was frightened but unharmed. In gratitude for his child's deliverance, John applied for permission to build a chapel into the solid rock of the nearby cliff face.

In an interesting sidenote, twenty years after the incident in the quarry, the Archbishop of York visited St Mary's church in Knaresborough and the priest who greeted him was John Mason. Did the boy become a priest after his miraculous deliverance from certain death? 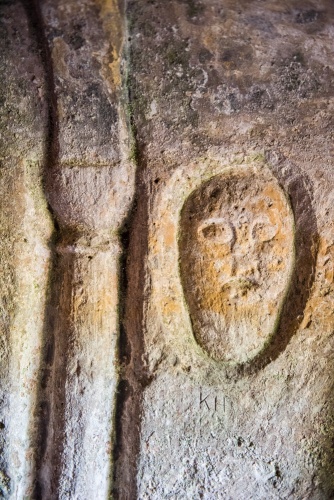 A carved head and pillar

The chapel stands on the old route to Knaresborough Priory and served as a wayside shrine for travellers going to and from the Priory as well as a place of worship for stonecutters at the quarry. There may have been a more practical reason as well; John was a master mason, the medieval equivalent of a builder, or contractor, and the chapel served as a way to showcase his skills to potential clients.

And make no mistake, though the chapel is hewn from the solid rock, it is a work of art, with exceptional carving detail despite the weathering of centuries. John carved an altar out of the rock wall, added a vaulted ceiling with intricate roof bosses and a series of carved heads. 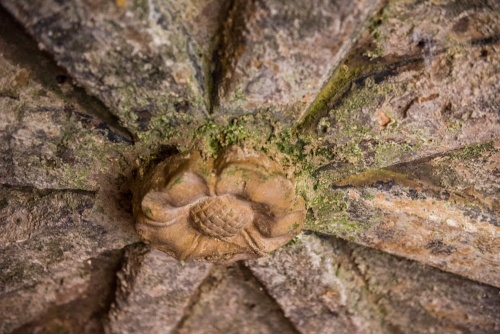 Carved into the rock beside the chapel entrance is the life-sized figure of a knight, one hand on his sword. We do not know precisely when the knight was carved, but it may be contemporary with the chapel foundation (ie. 1408). The head may have been recut in the Victorian period.

The Chapel of Our Lady of the Crag is not simply a remarkable historic site; it is a consecrated place of worship. It is a Marian shrine, dedicated to the Virgin Mary and Jesus Christ and is owned by Ampleforth Abbey.

The Chapel is sometimes confused with St Robert's Cave a mile downriver, where the 12th-century hermit Robert Flower had a chapel dedicated to the Holy Cross. William Wordsworth confuses the two chapels in his 1814 work 'Memorials of a Tour in Scotland'. 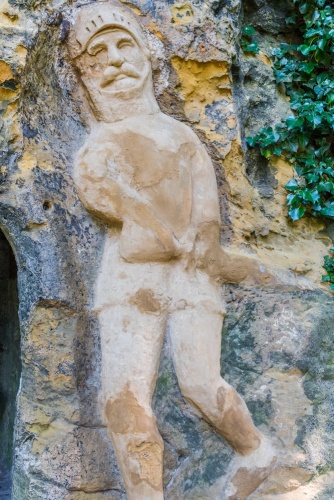 The chapel is on Abbey Road, the quiet riverside road the runs beside the River Nidd under the high sandstone cliffs. Traffic is limited on Abbey Road so the easiest - and most enjoyable - way to visit the chapel is to park in central Knaresborough and walk along the river. You will find the chapel about 140m (150 yards) from the Low Bridge end of the road, near the Half Moon pub. Go past the pub and you will find the chapel set back against the cliff on your left, with a newly planted garden running down to the road.

The chapel has very limited opening times. as of this writing, it is open from 2-4 pm on Sundays during the summer months and by arrangement at other times for pilgrimages. Please double-check the official website for opening times before making a special visit. Even if the chapel is not open to view he interior you can still get a very good view of the exterior with the carved windows, doorway, and the life-sized knight.

The Chapel is close to Fort Montague, the 'House in the Rock', a castellated building built onto the cliff face. 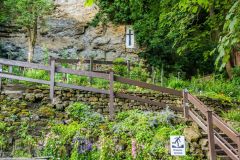 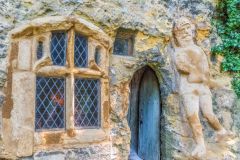 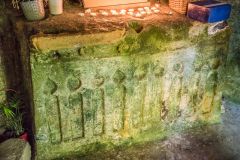 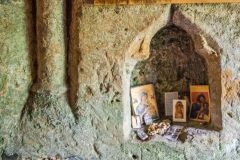 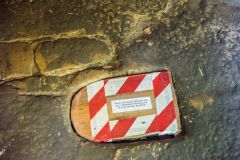 Nearest Accommodation to Chapel of Our Lady of the Crag:

More self catering near Chapel of Our Lady of the Crag

More Hotels near Chapel of Our Lady of the Crag