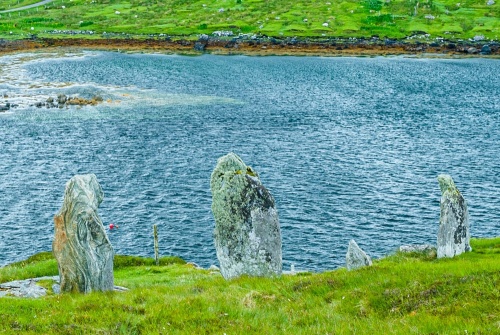 On a rocky hill overlooking Great Bernera Bridge and Loch Barraglom is an intriguing grouping of standing stones that may -- or may not -- be part of a larger stone circle associated with Callanish, three miles away to the east.

Bernera Bridge Stone Circle is also known as Cleitir, Callanish VIII, Barraglom Stone Circle, and Tursachan (which simply translates as 'standing stones'). The stones stand on a relatively flat area on the southern slope of Cleitir Hill. The word Cleitir is thought to derive from the Old Norse word 'klettr', meaning a rocky hillside, which seems appropriate.

The stone arrangement consists of three standing stones and a fourth recumbent stone. The standing stones seem to form part of a circular arc and are oriented with their widest faces towards the water. The stones are set at the edge of a cliff that plunges 12.5m to the rocky shore below.

Is it a stone circle?

No, not in the traditional sense. The siting of stones creates a stone arc, a form found nowhere else in Britain. 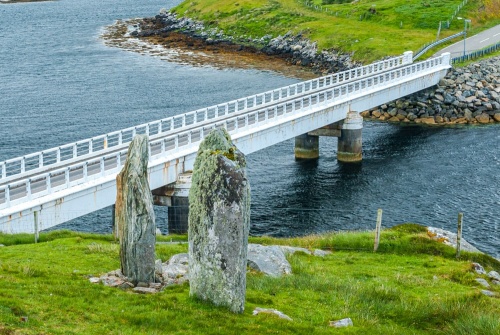 The standing stones look down on Bernera Bridge 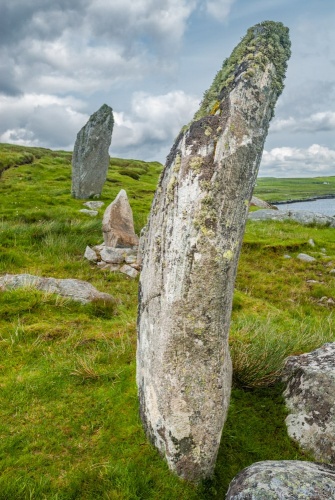 Looking along the stone arrangement

In addition to these three upright stones and the prostrate pillar stone, there is another arrangement of small stones that has been described as a birthing chair, though, as far as I am aware, there is no suggestion that it was ever used for that purpose. It would be extremely uncomfortable!

An investigation in 2010 concluded that the stones form a solar observatory intended to be used to track astronomical events at Beltane and/or Lammas. 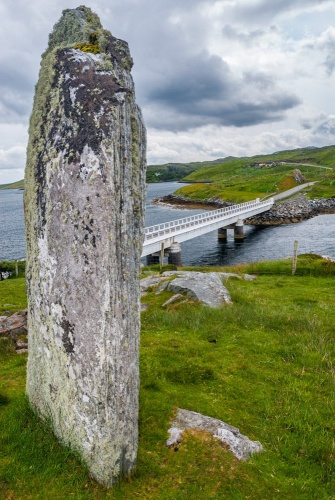 The standing stones look down on Bernera Bridge, also known as 'the Bridge over the Atlantic' (one of two bridges in Scotland to be given that name).

The bridge links the Isle of Lewis mainland to the south and the island of Great Bernera to the north. It passes over a narrow straight of water that forms part of Loch Roag, which flows directly into the ocean, hence the bridge's popular nickname.

The bridge was built of pre-stressed concrete in 1953. At that time it was the first bridge in Europe and only the second in the world to use this type of construction technique. 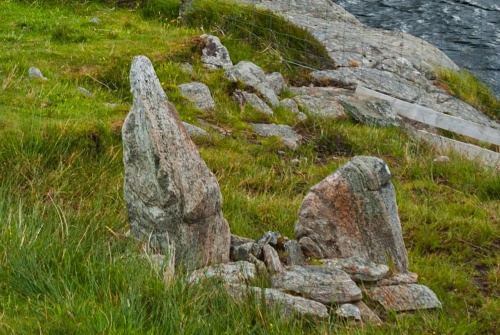 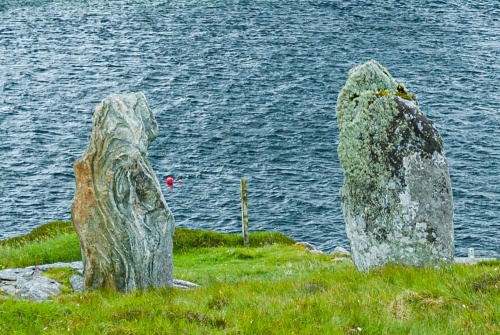 From Stornoway, take the A858 west and turn off onto the B8011 at Garynahine. After about 9 miles turn right onto the B8059, signposted Great Bernera. Cross the Bernera Bridge at Earshader and you can see the stones on the clifftop directly above and to the left of the northern end of the bridge.

There is a small car park and viewing area immediately off the bridge on the right-hand side of the road (southbound lane). Cross the road and you will see a very short and steep path just before the bridge. This path leads straight to a gate that gives access to the stones.

Nearby accommodation is calculated 'as the crow flies' from Bernera Bridge Stone Circle. 'Nearest' may involve a long drive up and down glens or, if you are near the coast, may include a ferry ride! Please check the property map to make sure the location is right for you.