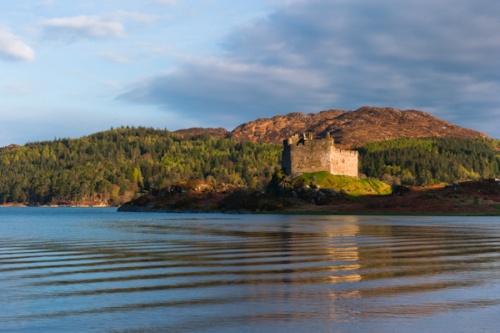 This picturesque castle ruin stands on a rocky islet near the south shore of Loch Moidart. It was an important power base for Clanranald, part of the MacDonald clan. Tioram was an important centre in the medieval Lordship of the Isles, and tradition suggests that it was built by Amie MicRuari, wife of John of Islay, Lord of the Isles.

That would put the origins of Tioram in the early years of the 14th century. An examination of the architecture suggests a much earlier date, however, no later than the early 13th century.

The first construction at Tioram was a simple curtain wall, which we can see today. Within the 13th-century wall, an internal tower was built sometime in the 15th century. At the same time, the curtain wall was raised considerably.

Further construction took place in the 16th century when the hall was extended and a second tower added. The spacious internal chambers and the large windows suggest that by this time the castle was primarily intended as an impressive showpiece rather than a purely defensive building. 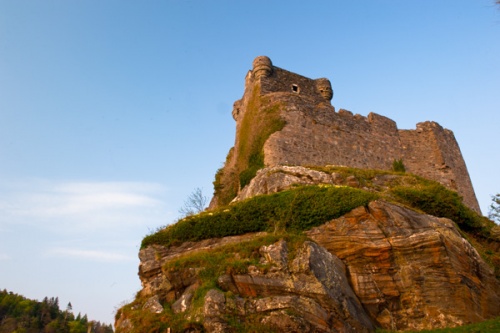 The castle atop its rocky tor

Tioram acted as an administrative centre of Garmoran, ruled by Clanranald. The location, seemingly so remote and isolated today, was actually well situated for controlling the busy shipping lanes between the south Hebridean islands and Skye.

In 1544 Mary of Guise, the Queen Regent, ordered a siege of Tioram. The siege was carried out under the command of the Earls of Huntly and Argyll. Repairs in the 19th century discovered cannonballs from 1544 still embedded in the castle walls. In the 1650s, Oliver Cromwell occupied Tioram briefly as part of his attempt to subdue the Catholic Highlanders.

Tioram was reoccupied by the 12th Chief, John, a terrifying and bizarre character who enjoyed shooting anything in sight from the highest turret of the castle - including his own clansmen! John was said to be followed about by a spectral black frog, which disappeared from legend after the laird's death.

When Allan, 14th chief of Clanranald, went to France to join the court in exile of James Stuart (the Old Pretender) in 1692, William III ordered Tioram seized and garrisoned with royal troops. Strangely, Allan was pardoned and returned to Scotland in 1697, but rather than take possession of Tioram once more he chose to build a new fortress at Ormacleit on South Uist. 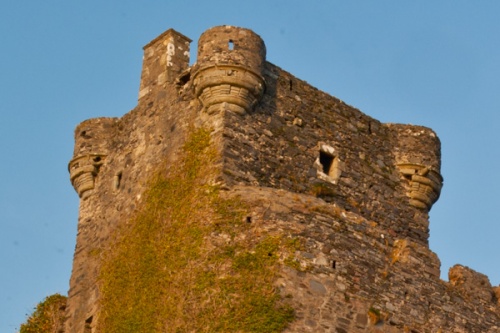 The tower top and turrets

Tioram Castle was held for the king until 1715 when it was captured by Clanranald supporters as part of the Jacobite rising. The clansmen appear to have burned the castle to prevent it being used by royal troops again.

The slighting of Tioram was only a partial success, for Tioram was used as an artillery store during the 1745 Jacobite Rising. French cannon intended for Bonnie Prince Charlie's army was stored there, but only some of the guns ever made their way to the prince's army, because the impoverished Clanranald could not find enough horses to carry the heavy guns to the Stuart army. The castle was never again used and remains today a romantic and very picturesque ruin.

Note
There is a parking area at the end of the road, and a path leads from there along the loch shore to the castle. The castle is joined to the mainland by a narrow neck of land which allows access at most times, but when the tide is at its highest you may need rubber boots to get across the strait! Please take care; the castle walls are in a very poor state, and the castle should not be entered.

Wow! A fabulously scenic and romantic ruin in an unforgettable location. 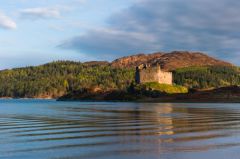 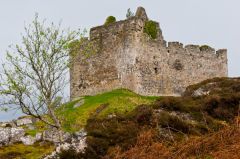 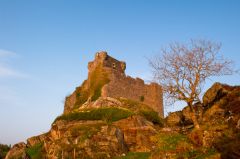 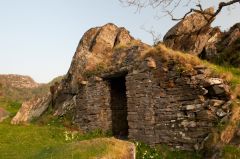 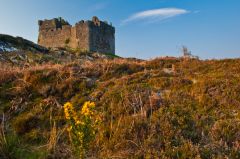 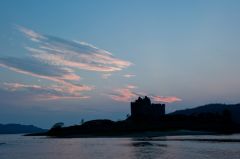 Nearby accommodation is calculated 'as the crow flies' from Castle Tioram. 'Nearest' may involve a long drive up and down glens or, if you are near the coast, may include a ferry ride! Please check the property map to make sure the location is right for you.

More self catering near Castle Tioram >> 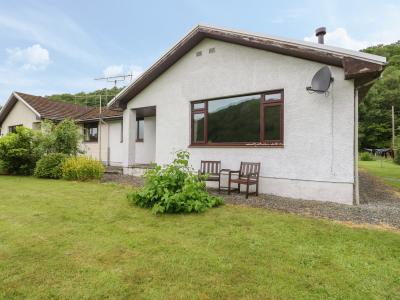 This semi-detached bungalow rests close to the village of Acharacle in Scotland and can sleep four people in two bedrooms.
Sleeps 4