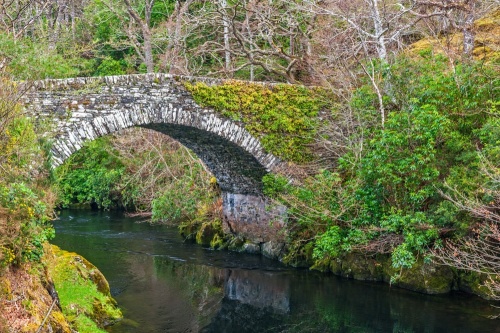 Just north of Acharacle, the River Shiel narrows perceptibly as it flows from Loch Shiel to the sea at Loch Moidart. Spanning this narrow chasm is a picturesque single-arched bridge erected in 1804 by the Commissioners for Highland Roads and Bridges to a design by the famous Scottish engineer Thomas Telford.

The bridge carried the road from Lochmoidart to Corran Ferry until 1899, when the owners of the neighbouring Ardnamurchan and Dorlin estates privatised it. The Old Bridge had to be replaced with the present triple-arched road bridge, designed by engineers Blythe and Westland of Edinburgh. 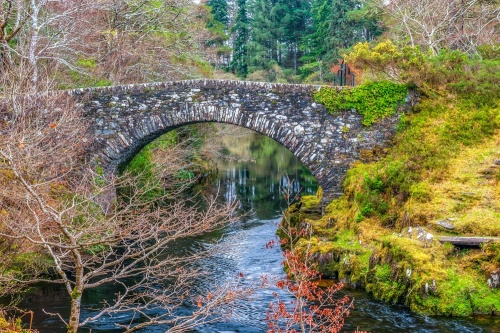 The downstream view (from the north-west)

The bridge is built of rubble. It is slightly humpbacked and has a low parapet.

Set into the bridge parapet is a small plaque bearing the inscription:

'This bridge
is the
joint private property
of the
Right Hon. Lord Howard of Glossop
and
Charles Duneill Rudd Esq. of Ardnamurchan.
as per agreement
dated the 14th and 20th July 1899
and the March between the
Dorlin and Ardnamurchan Estates
is the centre of the River below this Tablet.' 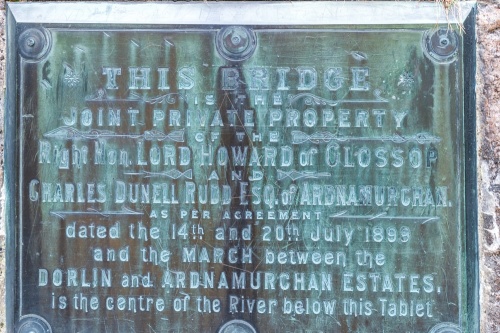 In plain English, the plaque shows that the bridge was jointly owned by Lord Howard of Glossop and Charles Rudd of Ardnamurchan. Rudd was a wealthy diamond merchant and a business partner of Cecil Rhodes. The River Shiel formed the boundary between the two estates, so the midpoint of the bridge marked the meeting of the estates. 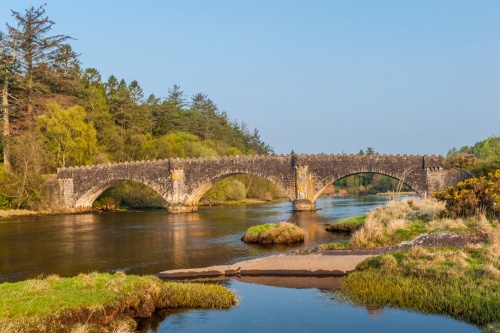 One of the most prolific and influential engineers in British history, Thomas Telford was born in 1757 near Dumfries. His father was a poor shepherd but Telford worked as a stonemason before a patron got him the job of Surveyor of Public Works for the County of Shropshire. He made his name by designing the Severn Suspension Bridge (1790).

He was hired by the Commissioners for Highland Roads and Bridges to survey the roads in rural areas of the Highlands as part of a transportation infrastructure overhaul. In a task that took him 20 years, Telford laid out over 1,000 miles of roads and designed 120 bridges across Scotland. Old Shiel Bridge was part of that grand scheme to improve transportation across northern Scotland.

Old Shiel Bridge is just off the A861 north of Acharacle. The road crosses the River Shiel on the 1899 bridge. Turn north on the minor road towards Castle Tioram and you will see the Old Bridge ahead on your left. There is ample room to pull off the road.

Note: do not mistake Old Shield Bridge in Acharacle for the village of Shiel Bridge at the northern end of Glen Shiel (which, as you can tell by the name, also boasts a historic bridge). Just to be confusing, Shiel Bridge village also has an early 19th-century bridge designed by Thomas Telford.

Nearby accommodation is calculated 'as the crow flies' from Old Shiel Bridge. 'Nearest' may involve a long drive up and down glens or, if you are near the coast, may include a ferry ride! Please check the property map to make sure the location is right for you.

Self Catering near Acharacle