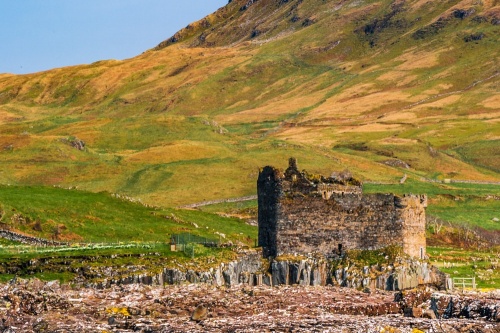 This deliciously situated 12th or 13th-century ruined castle sits above the shore of Kilchoan Bay, looking across to the Isle of Mull. Built by a descendent of Somerled, Lord of the Isles, and later a major stronghold of the MacIains of Ardnamurchan.

The most westerly castle in mainland Britain, Mingary stands on the rocky south coast of the Ardnamurchan peninsula, just outside Kilchoan. The original name of the castle was Mioghairidh, a Gaelic term meaning the place where machair and moorland meet, for it is here that the sand dunes of the west coast meet the peat-ridden soil further inland.

The first castle at Mingary was built in the late 12th or early 13th century, in a location perfectly suited to control the entrance to Loch Sunart and observe shipping across the Sound of Mull. This was probably a timber structure, but in 1265 the MacDougalls rebuilt the castle in stone.

The MacDougall lords did not have long to enjoy their fortress, for after they opposed Robert the Bruce in his ultimately successful bid for the crown of Scotland. Bruce's descendant, David II granted the estates of Ardnamurchan to his supporters of Clan MacIain.

The grant was confirmed in 1499, as a reward for supporting James IV in his battle to wrest control of the Hebrides from the MacDonald Lords of the Isles. Mingary Castle from the landward side

Retribution from the MacDonalds was not long in coming; in 1515 the MacDonalds of Lochalsh besieged Mingary, and the castle fell to them two years later. The MacDonalds razed the castle and destroyed MacIain lands in Ardnamurchan. In 1519 the MacIains tried to regain Mingary, but the clan chief was killed in the attempt. The MacIain heir was a woman, Mariada, who in 1540 sold her claim to Ardnamurchan to the Earl of Argyll.

The Armada comes to Mingary

We do know that a MacIain was living at Mingary again by 1588, however. The remnants of the Spanish Armada, driven by storms and damaged in their failed attempts to engage the English, were limping home, taking a circuitous route around the northern tip of Scotland and down the west coast. A Spanish ship sought water and supplies from the MacLean lord of Duart, on Mull. 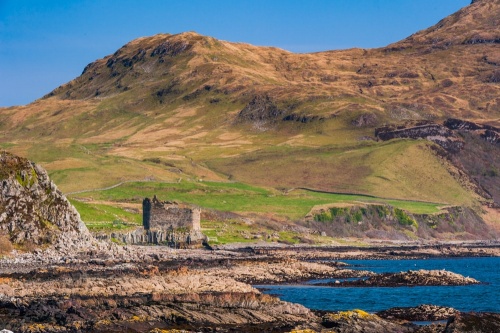 Approaching the castle from the west

In 1612 Mingary passed to the powerful Campbell clan, though that did not stop the MacIains trying to regain their hereditary lands. The Campbells were too powerful for their former allies, and the remaining MacIain lords were hunted down as pirates. The castle saw repeated action during the Wars of Religion in the mid 17th century; it was taken by Colkitto in 1644 and retaken by General Leslie in 1647.

The last real appearance of Mingary on the stage of history came during the Second Jacobite Rebellion of 1745. When Bonnie Prince Charlie landed in Moidart, the terrified minister of Mingary called on the government for assistance.

Government soldiers were dispatched to Mingary and garrisoned the medieval castle until the troubles had subsided. From that point on Mingary was left to decay, becoming little more than a romantic shell.

The castle is an irregular hexagon, surrounded by the sea on three sides. The remaining side was defended by a rock-cut ditch, crossed by a drawbridge. In the 18th century, the drawbridge was replaced with a stone causeway.

The castle is protected by a curtain wall, similar to that at Tioram Castle further north. This wall is higher and stronger on the landward side, an indication that the builders trusted the sea to act as an adequate defence on the other three sides. In the north side is a three-storey range, replacing the medieval hall. Another Georgian range was built against the west wall, incorporating a kitchen.

It is amazing how many formerly important Scottish fortresses are largely forgotten today. Mingary is one of these. You won't see it mentioned in too many tourist brochures, but the location is hard to match, and if you enjoy castles, its worth a trip to see.

Unfortunately, your views will be limited to exterior ones, for the castle is not maintained and is likely to have loose masonry. There are no facilities on-site, and no interpretive panels or other 'tourist stuff'.

There are two ways to reach the castle; the 'sensible way' and the 'daft but enjoyable way'. First the sensible way. There is a minor road on the eastern edge of Kilchoan, leading to Mingary House. The road leads past a row of cottages then ends at the drive to the main house.

I recommend parking along the verge by the row of cottages. From the gates to Mingary House a signposted trail leads along a few fields, cuts diagonally across another, and fetches up at the landward gates of a small enclosure which rings the castle.

The daft way to reach Mingary is far more scenic if the weather is fine. Park at the parking area for the ferry in Kilchoan. Look east along the curving shoreline and you can see the castle, squat against the rocky shoreline, about 1km away.

It's a scramble along the rocky shore, but it is not difficult and should take about 20 minutes to reach Port of the Spaniard, though from there you have to cross Mingary House's private beach to reach the castle foreshore. I didn't want to intrude, so I contented myself with photographing the castle from the rocky shore - a space I shared by some intrepid sea kayakers!

The castle is in view most of the way, and the view is really beautiful. One word of warning, though; watch for the tide. I was so taken with photographing the castle one evening that I didn't realise the tide had come in and completely blocked my way back. I was forced to scramble up and over a steep headland, which, though not dangerous, wasn't my idea of a good time. So be careful! Otherwise, I really enjoy the scramble from Kilchoan!

UPDATE
In a project lasting several years, the castle has been completely restored. It is now open to the public for luxury accommodation on a catered basis, with 5 bedrooms furnished in traditional Highland style. Unfortunately, this means that unless you are a paying guest you won't be able to see the castle interior, but the exterior is easy to explore from the shore below. 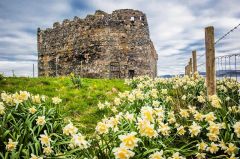 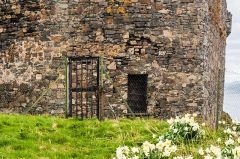 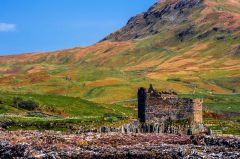 Nearby accommodation is calculated 'as the crow flies' from Mingary Castle. 'Nearest' may involve a long drive up and down glens or, if you are near the coast, may include a ferry ride! Please check the property map to make sure the location is right for you.

More self catering near Mingary Castle